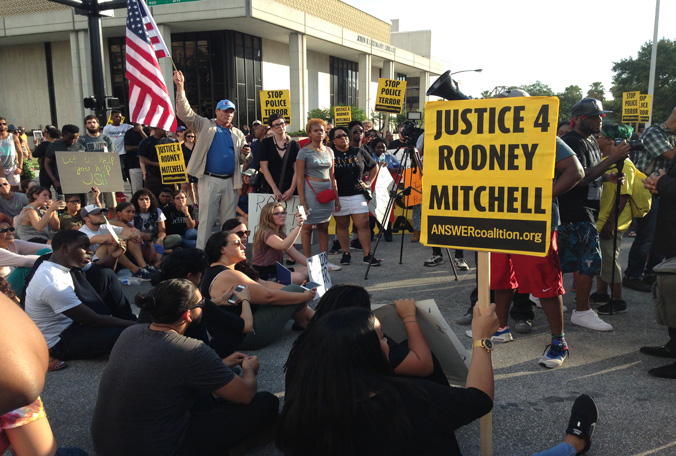 As tensions remain between the black community and the police around the nation, elected officials, law enforcement officers and religious figures discussed how to improve the situation at a press conference held in Tampa’s City Hall on Tuesday.

On Monday night, over 200 citizens marched for over an hour in a protest rally in downtown Tampa led by Black Lives Matter and the Uhuru movement before ultimately sitting down in the middle of the block of East Tyler Street and North Ashley Drive, to stage a sit-in.

There were no arrests made, nor injuries to report, though two white men did briefly get into a fracas as the event began at Lykes Gaslight Park.

It was the latest demonstration in the city following the assassination of five Dallas police officers last Thursday, which followed the deaths of two black men in Louisiana and Minnesota that has galvanized the nation.

“We don’t want Tampa to become like other cities that we’ve seen throughout the country. We don’t need that,” said Tampa City Councilman Frank Reddick, who kicked off the press conference held in City Council chambers on Tuesday. Although he was correct in saying that it’s been decades since Tampa had a situation regarding the police of people of color a la Ferguson or Baltimore, no less than three of the speakers at the event who are black said that they had been unfairly racially profiled in recent times by local law enforcement.

“I have been pulled over by the Sheriff’s Dept. and by the city of Tampa Police Dept.,” said Hillsborough County Commission Chairman Les Miller. “I’ve got a license plate on the back of my car that says “retired senator.” I guess they wanted to see what a retired senator looks like. I didn’t get ticketed, I wasn’t speeding. They just wanted to pull me over, I guess to see what I looked like, who I was.’

“I’ve been pulled over for making legal turns. I’ve been pulled over and looked at and let go, I’ve never been asked to produce any documents, I’ve been profiled and pulled over and told that my tag didn’t belong to my car, which it did,” said Mark T. Jones Sr., the pastor and founder of the Center for Manifestation in East Tampa. “There are some police officers who spend their time profiling and harassing a segment of the populace, instead of policing.”

Bishop and community activist Michelle B. Patty said she was tailed and ultimately pulled over after leaving a City Council meeting just a few weeks ago, as she and her husband were leaving a local fast-food establishment. What made the issue galling for her, she said, was the fact that she drives a car that has her name and picture prominently displayed on the outside body of the car, meaning it’s the only one of its kind, probably in the world.

“They looked into my vehicle, my husband and I were holding hamburgers and French fries, but they said that we just left a stabbing and that car was identified as being in the stabbing,” she said. “Everybody knows that was a bogus stop. I don’t know if it was intimidation because I had been here at City Council speaking out, but these types of things do happen, and we must stop acting like they don’t. We must hold people accountable for their actions.”

Both Patty and Jones admitted that they understood why the police were being aggressive. Jones says he has had properties he owns in East Tampa vandalized; Patty has lost a son and grandson to gun violence in East Tampa, “so I’m not standing up here saying I don’t know there aren’t problems.”

There were two local representatives of the law enforcement community who stood behind the speakers who discussed their harassment by the police. Neither officer, Assistant Chief of Police in Tampa Brian Dugan, nor Hillsborough County Sheriffs Officer Major Chad Chronister,addressed those anecdotes, but instead talked about what their departments have been doing to ensure that incidents like those in Baton Rouge and Falcon Hills, Minnesota.

Chorister said that Sheriff deputies are mandated by the state to have 40 hours of advanced training every three years, but that Sheriff David Gee goes beyond that requirement, having deputies get 40 hours of training every year. “Part of that is better policing policy, racial sensitivity, and de-escalation tactics,” said Chronister. “We know how important this is.”

Tampa City Councilman Guido Maniscalco and House District 61 Representative Ed Narain also spoke during the 75-minute press conference. Narain said it was a false choice to say that one has to stand as either a Black Lives Matter supporter or one who supports the police, but couldn’t be both.

“Stop confusing the issues,” he said. “All of us can proudly say that black lives matter in order to bring attention to the senseless death of African-Americans in police custody, and we can condemn violence and murder against police officers.”

With many members of there faith community sitting in the audience in Council Chambers, there was a constant referencing of God and how people needed to look within themselves to find the cure to the problem. After the scheduled group of speakers had finished, the Reverend J.C. Sanders challenged the group, saying that in a sense they were preaching to the choir, since the young men of color who are at the heart of the sometimes fatal exchanges between them and the police were not in the meeting.

“Do you believe that there are any problematic persons within your department?” Sanders asked the two officials representing local law enforcement. “We’re not dealing with something that is a fragment of the imagination. These things are occurring…I mean, we got a problem here, and just a photo-op is not going to get it.”