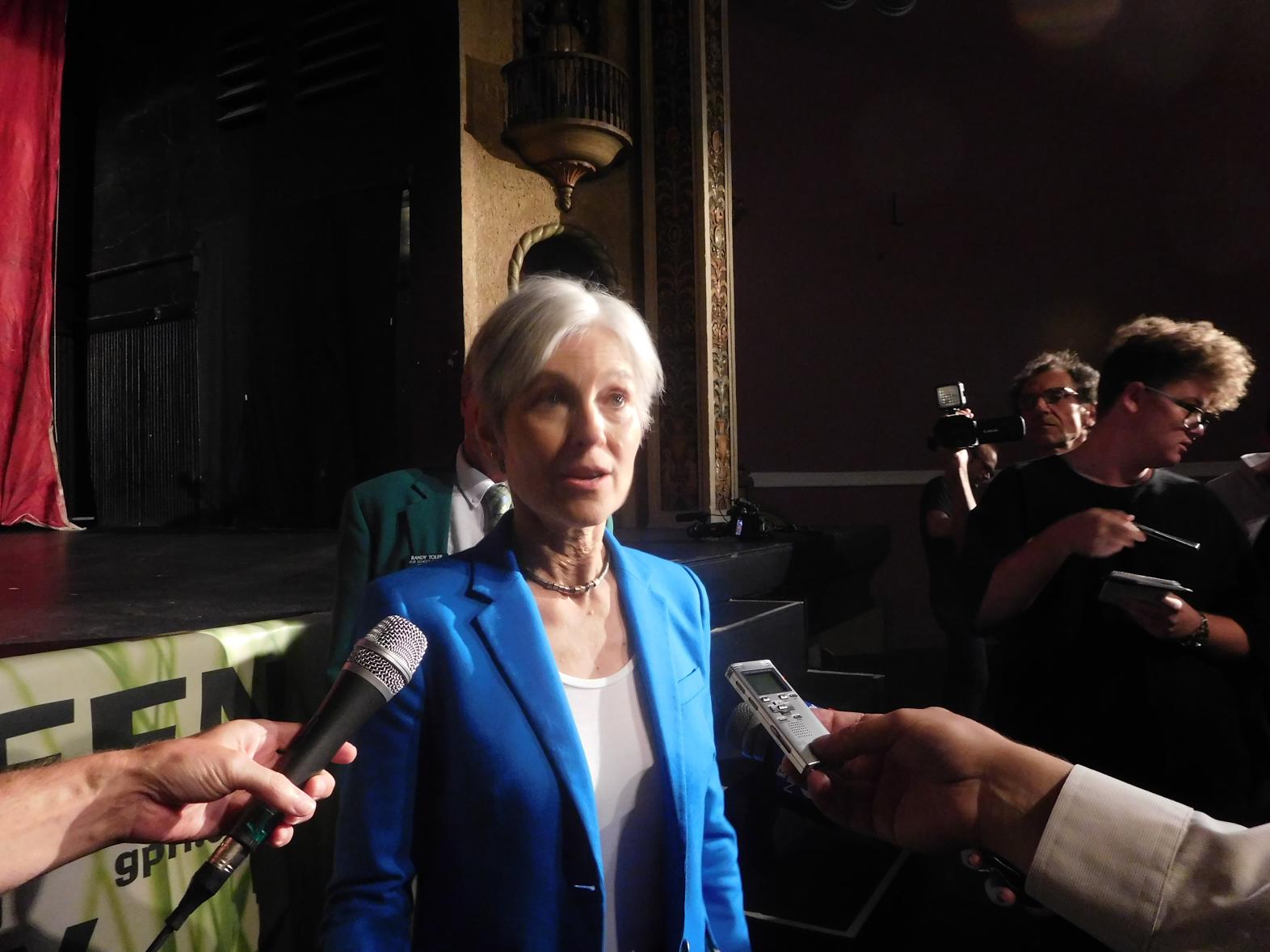 Dr. Jill Stein, the 66-year-old Green Party presidential candidate, brought her campaign to Tampa Wednesday night, where she spoke to a packed house in the second floor ballroom of the Cuban Club in Ybor City.

Stein is currently averaging around 2.5 percent in the national polls, not that dissimilar to the 2.7 percent Ralph Nader ultimately earned in 2000. More than one political observer has noted the similar circumstances of that election and this one — comparing the lackluster enthusiasm for Hillary Clinton among some Democrats to the sentiments towards Al Gore back at the turn of the century, which some contend is why George W. Bush ended up getting more votes in Florida, which decided the 2000 election.

Progressives say they know a Donald Trump presidency would be disastrous, but that’s not stopping about 10 percent of the public — adding in Libertarian candidate Gary Johnson’s polling numbers — to look beyond the major party candidates when considering their vote for president.

“I would feel terrible if Trump gets elected, but I’ll also feel terrible if Hillary gets elected,” Stein told reporters about an hour before she addressed the Cuban Club crowd. “Hillary actually has a track record. Donald Trump wants to bar Muslims from entering the country, but Hillary Clinton has been busy bombing Muslims.”

Stein said Clinton’s hawkish beliefs helped lead the country to intervene in Libya in 2011, and says that her call for a no-fly zone in Syria to contend with that crisis is tantamount to calling for going to war with Russia. “This is the Cuban missile crisis on steroids, but in reverse,” she charged.

More than a third of voters 18 to 29 said in the latest New York Times/CBS News poll they would vote for either Johnson or Stein. Johnson had the support of 26 percent of those voters, and Stein had 10 percent.

Much of Stein’s appeal is geared towards those millennials — as are her policies, such as her $1.3 trillion bailout plan to eliminate all student debt, which she’d pay for with a 0.5 percent Wall Street financial transactions tax. She calls it the biggest stimulus package imaginable “We came up with $16 trillion to bail out the crooks on Wall Street who crashed the economy. It’s about time to bail out the students who are the way forward, the engine of the new economy for the 21st century.”

Stein is the favorite of many Bernie Sanders supporters, but Bernie is trying to persuade them to support the Democratic nominee. Campaigning with Clinton at the University of New Hampshire Wednesday, the Vermont senator told the student-heavy audience that, “All of you know this is a very tight election and that New Hampshire could decide the outcome. So I am asking you here today not only to vote for Secretary Clinton, but to work to get your uncles and your aunts and to get your friends to vote.”

But Stein says those Bernie supporters need to give her candidacy a shot.

“There is not a new entitlement for big politicians called owning our votes,” Stein said in support of voting for a third-party candidate like herself. “They have to earn our votes, they don’t own them, they have not earned our votes. So I think we want to put the horse before the cart, not the other way around. Let’s empower and inform the American voter to decide which way they want to go, instead of trying to shut off discussion before it’s even been opened. Over 70 percent of voters have no idea about my campaign. They don’t know who I am or what I stand for. I think we owe it to voters to lead the way forward rather than the party operatives and the political pundits who are telling us that they want one candidate over another and the rest of us better just shut up and go home.”

At Wednesday night’s event, Stein was preceded by a number of local speakers discussing a multitude of issues, including Susan Glickman urging the crowd to vote against Amendment One, Donna Davis from Black Lives Matter, Kelly Benjamin with the Fight for $15 movement, and Michelle Cookson from Sunshine Citizens informing the audience about why her group is so strongly opposed to the proposed Tampa Bay Express project.

Stein talks about her “Green New Deal” — an emergency jobs program she says cures the crisis of the part-time, minimum wage economy by focusing on climate change. She says it would require a mobilization similar to going to war, but says it’s worth it to save Florida, because the Sunshine State is “in the target hairs” of the global warming problem.

“You have to err on the safe side and ensure that this magnificent state and the magnificent ecosystem and what you have in your economy is not only alive, but needs to be thriving,” she said.

And Stein said “we need to go back to the drawing board” when it comes to dealing with companies like Mosaic, after the phosphate giant failed to disclose to their neighbors that 215 million gallons of contaminated water had fallen into a sinkhole at their phosphate plant in Mulberry, getting into the Florida aquifer, a source of fresh water for much of the state.

“This is not negotiable. Florida needs a great water supply,” Stein says. “We need a system that puts people first, ahead of profits. We need industries that are sustainable. We can have profits, but profits should not take place of our survival, and Florida’s survival not only as a viable economy, but just as a place that has drinking water, and an ecosystem.”

Stein was at Hofstra University on Long Island on Monday night, the site of the first presidential debate, before escorted off the college campus because of a lack of proper credentials. She said the lackluster discussion of war was why she should have been on that stage.

“Fifty-four percent of our discretionary national budget is going into these wars and this dangerous and bloated military. Almost half your income taxes are paying for it, and what do we have to show for it?” she asked. “Failed states, mass refugee migration and terrorist threats. So there’s another way forward in terms of national security and international peace. We call for a weapons embargo as well as a freeze on the funding of the bank accounts of those countries that are continuing to fund terrorist enterprises around the world, above all the Saudis. … They are the ones bankrolling all of this, so we and our allies have enabled this mess. We can shut it down peacefully, because by bombing it, we create the next wave of terrorism and they keep getting worse, they’re not getting better. So there’s a different way forward.”

Stein continues her Florida campaign tour Thursday. She’ll appear at the Robert L. Taylor Community Center in Sarasota at noon, and at the Flamboyant Banquet Hall at Acacia’s El Centro Borinqueno in Orlando at 6 p.m.