More patients might be eligible for medical marijuana under Amendment 2, but a preliminary draft of new rules doesn’t appear to allow for immediate growth in the industry to meet demand.

On Tuesday, the Florida Department of Health released the preliminary text of proposed rule development. The release comes ahead of five public hearings schedule for early next month, giving Floridians a chance to weigh in on the agency’s rules and regulations governing the state’s medical marijuana program.

But the update appears to do little to establish new rules, instead creating a system that could bring new patients into the state’s existing medical pot program.

“Any proposal which seeks to mold the spirit of Amendment 2 into the narrow and flawed law on the books today should be rejected, and a more comprehensive strategy must take priority. The people of Florida overwhelmingly voted for a new direction in medical marijuana, and we must heed the will of the voters,” said Sen. Jeff Brandes, a St. Petersburg Republican. “I will support no bill, nor any rule, that maintains the established state sanctioned cartel system we have today, and I urge my colleagues to join me in proposing a free market solution for Florida.

Under the proposed rule, only patients with one of 10 specific medical conditions, like HIV/AIDs or cancer, are eligible for medical marijuana. The rule does allow for use, as long as the Florida Board of Medicine identifies which debilitating conditions it can be used for.

That’s contrary to the ballot language, which allowed physicians to order medical marijuana for a patient for if they believe “the medical use of marijuana would likely outweigh the potential health risks for a patient.”

“The proposed rule issued today by the Florida Department of Health (DOH) stands in direct contradiction with Article X, Section 29 of the Florida Constitution, the expressed intent of the authors of that section, and the will of the overwhelming majority of voters who approved the amendment,” said Ben Pollara, the campaign manager for the United for Care campaign. “If DOH’s rule is implemented as written, it will be in clear violation of Florida law.”

“I believe the Department is being appropriately cautious and awaiting the Legislature’s direction,” said Taylor Patrick Biehl, a lobbyist at Capitol Alliance Group who represents the Medical Marijuana Business Association of Florida. “The eligible patient population grows significantly under Amendment 2 — potentially tenfold. I’m confident that both the Department and the Legislature recognize the need to create affordable, safe and accessible medicine to the deserving patients.”

The preliminary rule also states all medical marijuana treatment centers, which under new rules would be the same as a dispensing organization, must go through the same “approval and selection process” outlined in existing law. Those organizations are also “subject to the same limitations and operational requirements” currently outlined in state law.

That rule means the seven nurseries currently authorized to grow, process and sell medical marijuana will have the corner on the market. Those nurseries are already growing the low THC cannabis authorized under a 2014 state law.

There is potential for more dispensing organizations to come online in the future, but not until 250,000 qualified patients register with the compassionate use registry.

The ballot initiative gives the Department of Health six months after the amendment goes into effect to write the rules governing medical marijuana. The amendment went into effect Jan. 3.

“The legislature has demonstrated a willingness and desire to implement this amendment in a reasonable manner that respects the plain language of the constitution, and reflects the mandate of the electorate,” said Pollara. “Why DOH would choose to engage in a policymaking exercise which ignores both the law and the role of the legislature in implementing the law is a mystery. Perhaps the actions of DOH shouldn’t surprise, given their history of incompetence in the administration of Florida’s medical marijuana laws.”

A spokeswoman for the health department said in an email to FloridaPolitics.com that the agency “initiated the rulemaking process as directed by Amendment 2.” She went on to say the state agency looks forward to “receiving input from all interested stakeholders through the open and transparent rulemaking process.”

The Legislature has indicated it will tackle Amendment 2 during the 2017 Legislative Session. Majority Leader Ray Rodrigues, an Estero Republican, is expected to carry the medical marijuana bill in the House. And last week, the House Health Quality subcommittee held a two-hour meeting where experts, including Christian Bax with the Office of Compassionate Use, participated in a panel discussion on the implementation.

The workshops are open to the public, and anyone can comment. The meetings will be held: 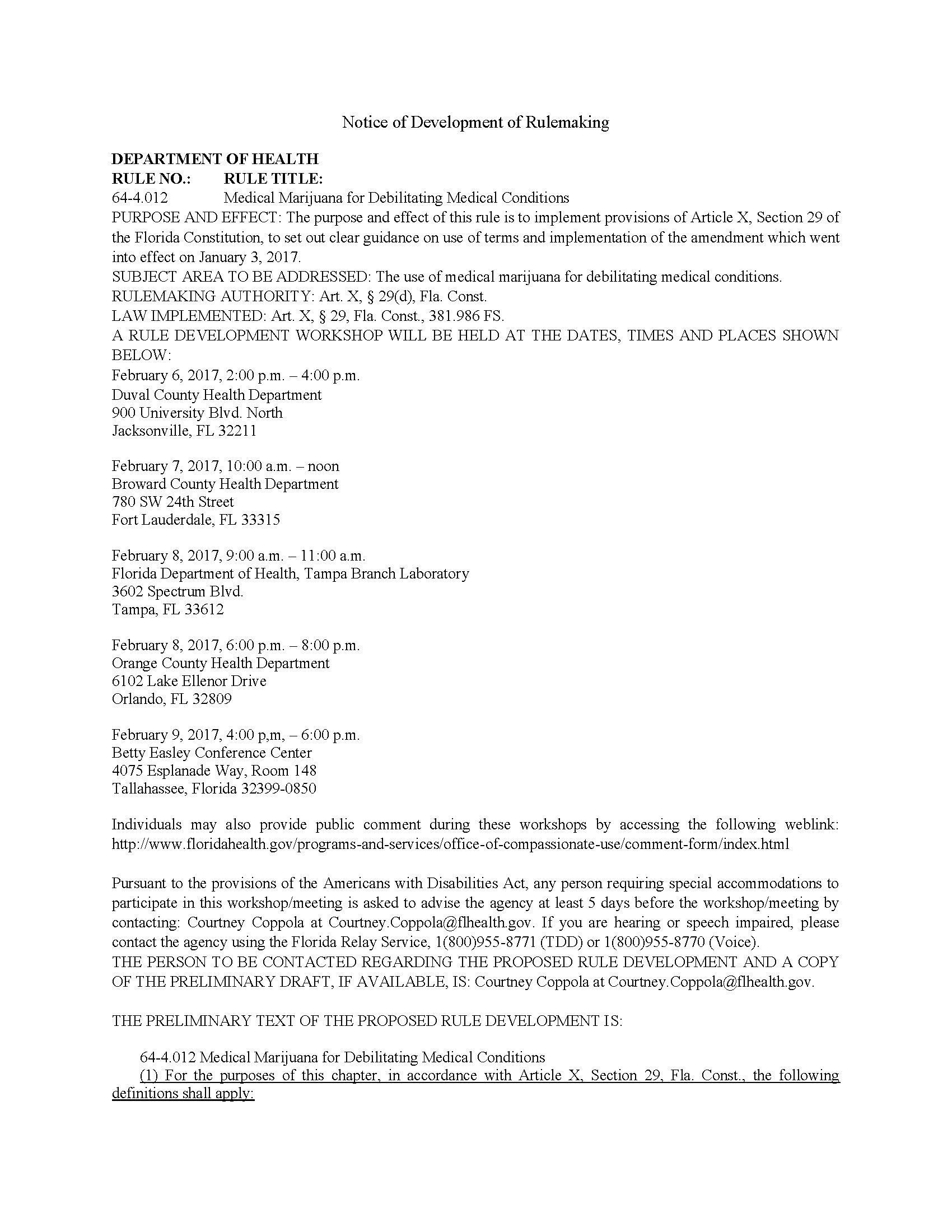 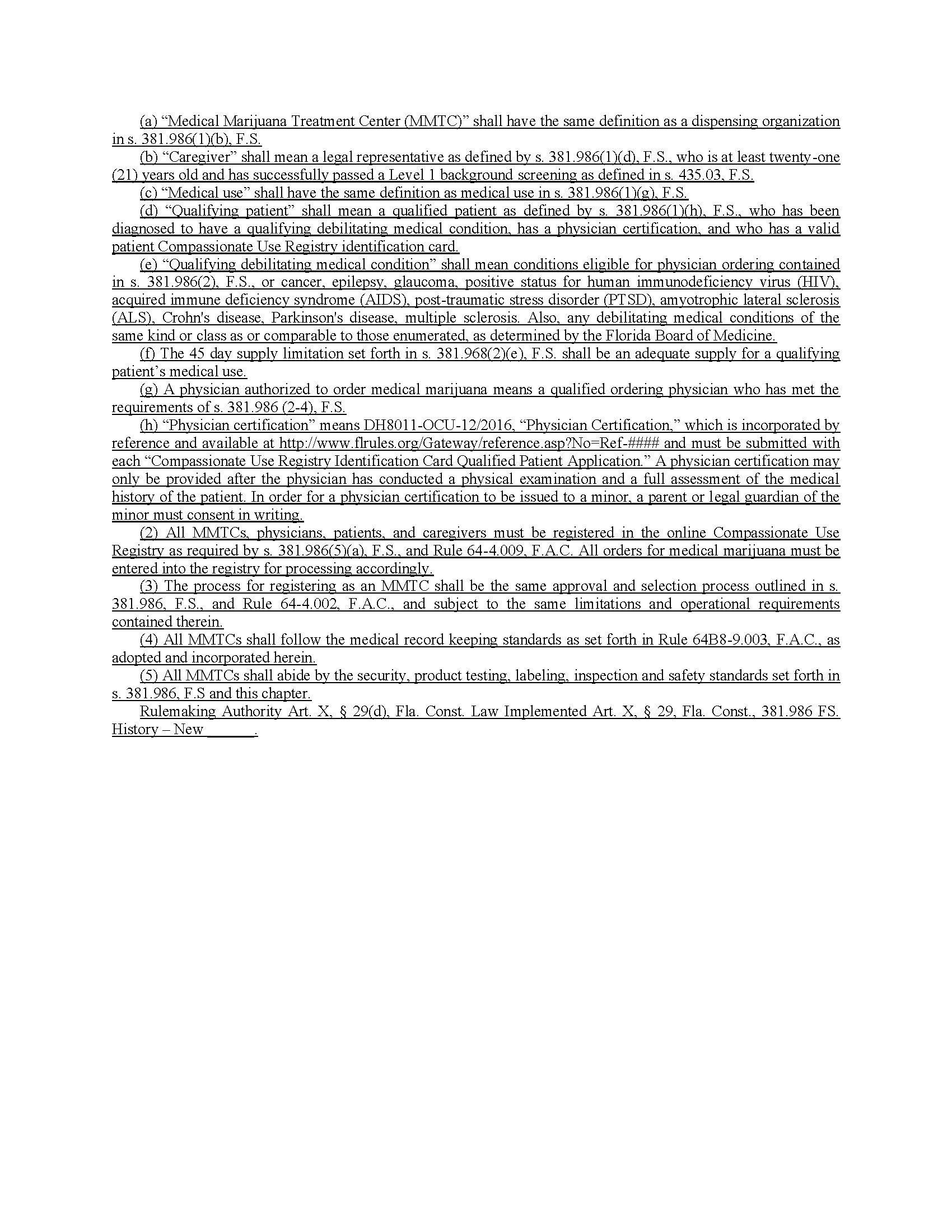 previous18M more Americans would be uninsured under 2016 GOP repeal