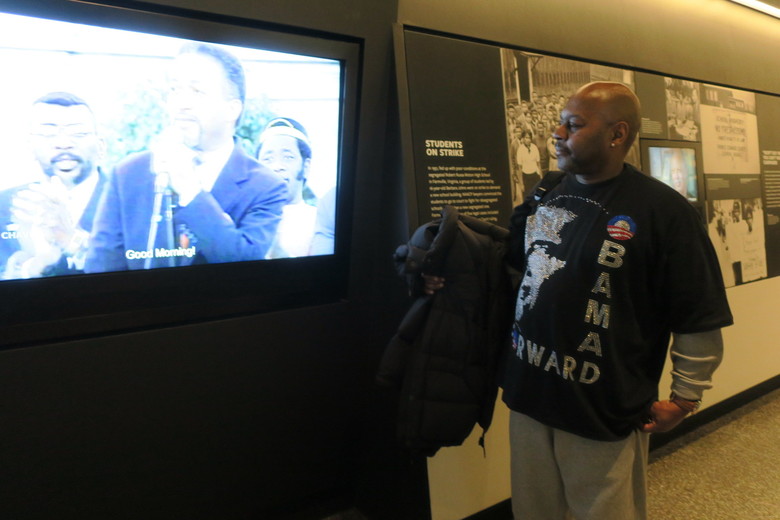 On the night in 2008 when Barack Obama was elected the country’s first black president, many black Americans wept. Eight years later, they weep again for the end of an era some thought they would never live to see — and for the uncertain future they face without him.

In Obama, many African-Americans felt they had a leader who celebrated their culture and confronted their concerns. In his wife, Michelle, they saw a national role model who epitomized style and grace with brown skin.

Now some regard the election of his successor as the price of black progress and the culmination of years of racist rhetoric directed at the Obamas — at times stoked by President-elect Donald Trump himself.

“There’s a great deal of melancholy and fear and despair,” said Lester Spence, professor of political science and Africana studies at Johns Hopkins University. “This is a dynamic that the vast majority of black America has only read about or seen in movies. They don’t understand the potential of what’s coming.”

Not all African-Americans are sad to see Obama leaving the White House. But blacks overwhelmingly voted for the president in 2008 and 2012, and fewer than 1 in 10 black voters supported Trump.

For many, the events of the final days of Obama’s presidency added to the sense of gloom.

With his inauguration fast approaching, Trump took to Twitter last week to bash Rep. John Lewis, a civil rights legend who was nearly killed marching for voting rights in Selma, Alabama in 1965. Trump said Lewis was “all talk, talk, talk — no action or results.”

On Monday, the president marked his last Martin Luther King Jr. holiday before he himself enters the annals of history. On Friday, he will be replaced by a chief executive who questioned Obama’s birthplace and offended many blacks during his campaign by describing dangerous “inner cities” in need of “law and order.”

Perhaps nowhere was the surreal moment more evident than at the Smithsonian National Museum of African-American History and Culture, where a sea of black faces gathered to say goodbye and to celebrate a history of struggle and progress.

“This year marks the most significant, most poignant and really the most important Martin Luther King Jr. celebration of my lifetime,” said James Peterson, professor of English and Africana studies at Lehigh University. “There’s never been a clearer case, in terms of presidential politics and the general direction of the country, where King’s edicts are more pertinent than they are now.”

Some in the crowd were descendants of slaves. Some survived segregation. Others were too young to have known anything other than a black president. Many made a deliberate decision to be there on this holiday at the end of a historic presidency.

For black Americans, the museum offers “proximity to black culture, black history and the power of black social movements. You can steel yourself,” Peterson said. “There’s a reason folks will find solace in just being there.”

Throughout the museum are milestones of black suffering and achievement. Watching a video of the 1963 March on Washington, Charles Phillips of Philadelphia worried about whether dark days lay ahead.

“I think we’re going to be in for some bad things,” said Phillips, who wore an Obama T-shirt he bought during the president’s first term. “To come to a place like this, it touches you, to see what we went through — and are hopefully not going to go through in the next four years.”

Looking at an exhibit with photos of a smiling, waving Obama family during the 2008 inauguration, Kim Taylor became emotional. Though she had visited the museum five times since it opened in September, she cried for the first time as she reflected on the progress of the civil rights movement and Obama’s historic presidency.

“I don’t know if we’ll ever have another black president,” said Taylor, of Capitol Heights, Maryland. “I made a point to be here. I just wanted to be a part of history, to have that closeness with other black people.”

Jerrod Lemmons and his wife, Dee, were in town from Waxahachie, Texas, for the weekend, taking their daughter on a college tour of Howard University. But stopping by the museum was also important. Being there during Obama’s last days in the White House was humbling and bittersweet, Jerrod Lemmons said.

His head dropped at the thought of Trump taking office at the end of a week that began with King’s birthday.

“I don’t believe he supports us,” Lemmons said of the president-elect. “He doesn’t see value in who we are as a people.”

Sitting outside of the exhibit on sports, he reflected on African-Americans’ sacrifices, failures and victories.

“It all comes down to: What are we going to do?” Lemmons said. “We all have a responsibility to each other. This museum reminds us exactly of that.”

Jewelle Mason, also visiting from Philadelphia, came to the museum hoping, just maybe, that Obama might show up. He didn’t. But she let out a contented sigh that she was able to be there on King Day, savoring the final days of Obama’s presidency.

“It’s nice to know that now he’s a part of the history,” Mason said. “That’s something they can never take away from us.”

Republished with permission of The Associated press.

previousDonald Trump steps into security bubble; will he bring his phone?