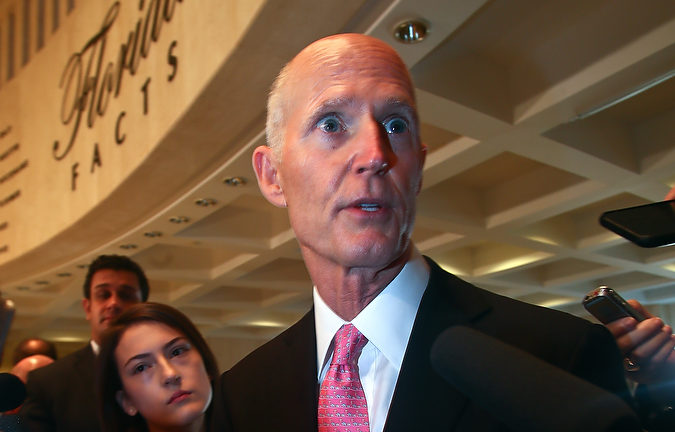 When Gov. Rick Scott appointed a conservative jurist to the state’s Supreme Court in December, he made clear he wasn’t done.

“I will appoint three more justices the morning I finish my term,” he said, referring to the mandatory retirement in early 2019 of the court’s liberal-leaning triumvirate of Justices Barbara Pariente, Peggy A. Quince and R. Fred Lewis.

Now, two progressive organizations are saying to Scott: Prove you can. They say he can’t.

The League of Women Voters of Florida (LWVF) and Common Cause on Wednesday sued Scott in the Supreme Court, saying he doesn’t have the power to name their successors—only the governor elected after Scott does.

They filed a petition for “writ of quo warranto,” a court action against government officials to demand they prove their authority to perform a certain action.

The upshot of their argument is that Scott can’t replace the justices in question because he’ll be out of office earlier on the same day all three retire, and their terms last till midnight.

“The Florida Constitution prohibits a governor from making a prospective appointment of an appellate judge to an existing seat before that seat becomes vacant,” the writ argues.

It adds: “A prompt, final decision on this pure question of constitutional law … would preempt cynical complaints by anyone dissatisfied with the decision that the case was contaminated by political considerations.”

Assuming the Republican Scott appoints three more conservatives in 2019, the seven-justice court could tilt 6-1 to the right, with current Chief Justice Jorge Labarga remaining. His mandatory retirement is in 2023.

“The Florida Constitution establishes a mandatory retirement age for justices that occurs on or after their 70th birthdays,” the court’s website explains.

Three more conservative judges may well be appointed anyway, even if left to the next governor: Florida hasn’t chosen a Democrat for the Governor’s Mansion since Lawton Chiles was re-elected in 1994.

The lawsuit, however, sticks to a “constitutional question that has plagued this State for decades: When a judicial seat opens on a Florida appellate court due to an expired term coinciding with the election of a new governor, whom does our Constitution authorize to appoint the successor, the outgoing governor or the newly elected governor?”

In December 1998, days before Chiles died in office, he and then Gov.-elect Jeb Bush, a Republican, avoided a crisis by jointly appointing Quince to the court to replace Ben F. Overton.

In 2014, lawmakers placed a proposed constitutional amendment on the statewide ballot, backed by Republican state Sen. Tom Lee, that would have given Scott the power to name the new justices. But it failed to gain the required 60 percent approval.

“There may be many reasons voters rejected the amendment, there can be no doubt one reason was that a newly-elected governor is not only more accountable, but also better represents the will of the people who just voted than someone elected four years ago,” the writ says.

Ultimately, Scott “lacks authority because the expiring judicial terms run through the last second of the evening of January 8, 2019, by which time his successor will have begun his or her term or, alternatively, if the vacancies occurred earlier in the day, his successor’s term still will have already begun by that time,” it says.

“… (I)f any ambiguity existed in our constitutional scheme, it should be resolved in favor of allowing the incoming governor, who best represents the will of the people, to fill judicial vacancies arising the same day he or she is set to take office.”

nextIs $44 million worth it to ANZ bank to draw the scrutiny of American regulators?