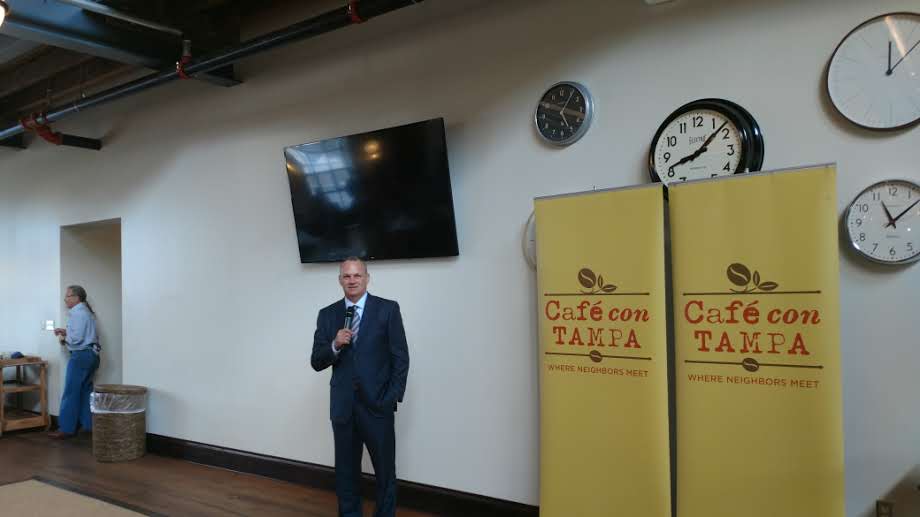 It was a tough room for House Speaker Richard Corcoran.

Speaking before an unfriendly crowd of public school supporters in Tampa, Corcoran doubled down on his support of an education bill that creates a new system of charter schools to replace underperforming public schools.

On Thursday, Corcoran stood beside Rick Scott in Orlando as the Governor signed the controversial HB 7069.

To its critics, the most provocative part of the omnibus education bill was Corcoran’s ‘schools of hope’ plan, which includes a $140 million incentive plan to attract high-performing, specialized charter schools to in effect compete with struggling neighborhood schools.

“The only way you can draw down that money if you’re a charter school was if a situation existed in Florida where we were taking children and forcing them into ‘failure factories’ where they were getting an inferior education,” Corcoran said Friday morning to a packed house at the Oxford Exchange in Tampa’s North Hyde Park district.

The Land O’Lakes Republican was the featured guest at the weekly Tampa Con Cafe lecture series.

It was the term “failure factories” that drew particular ire during the extended Q&A portion of the morning, during which Corcoran was criticized by Kenny Blankenship from Pasco County.

Afterward, Corcoran explained it was the same language used by the Tampa Bay Times in their award-winning 2015 series about failing schools in South St. Petersburg.

He said the “proven record” of success for those schools is that they had to have an 80 percent graduation rate, 80 percent go on to a college, and they had a higher than the average county and state testing scores.

But critics say the bill will devastate already cash-strapped traditional public schools. They’re concerned about changes in the allocation of Title I funding, the federal money used for low-income schools. That could affect districtwide programs such as summer school.

There’s also concerns about a part of the bill making it possible for universities, churches and several other types of institutions to provide space for charter schools without zoning exceptions, overriding local control over zoning decisions, according to the Miami Herald.

And Democratic gubernatorial candidate Gwen Graham declared it to be a “massive step toward turning Florida’s public-school system into a public-school industry designed to benefit corporations and powerful interests.”

Democratic gubernatorial candidate Andrew Gillum said Scott “would rather his for-profit charter school friends make a quick buck instead of providing our kids with the world-class education they deserve.”

Even some who support the bill, such as Agriculture Commissioner Adam Putnam, have blasted the lack of transparency in how it was assembled.

But Corcoran continues to defend how it all went down.

What was done at the end of the legislative process on the education bill was taking completely vetted and debated bills and put together, Corcoran added. He did acknowledge that he would like to “work” on limiting the “number of mergers in the last week of Session.”

Public school supporters in Florida have blasted the Legislature’s support for charter schools for years, saying they are not held to the same standards of accountability. Corcoran pushed back on that argument Friday.

“There are public charter schools, and there are public traditional schools. Both of them are under the same accountability provisions,” the Speaker said, eliciting disapproval from the audience.

When he said charter schools came with the same certification requirements, the growls grew louder.

“Yes, they do!” he replied. “I’ll be glad to sit down with you and go through the statutes. They don’t have to be unionized. That’s the biggest difference between the two — ”

“No!” responded at least a dozen members of the public.

Among those public educators who were shouting at Corcoran was Naze Sahebzamani, a Hillsborough County public school teacher who accused the House Speaker of speaking in “half-truths.”

“I just think if he wants to make education a priority in the state and we want us to become leaders in this country in education, then he has to fund public education and he has to hold the charter schools to the same standards, and the same accountability as the rest of us, which they’re currently not doing,” she said.

There were also several questions highly critical of what city and county government officials said this year has been an unprecedented attack on the issue of home rule.

Tampa City Councilman Harry Cohen asked Corcoran how he could justify the Legislature’s decision to place a measure on the 2018 ballot to expand the homestead exemption. If passed, the proposal will reduce property taxes in every local jurisdiction in the state (Tampa’s estimated loss would be $6 million annually; Hillsborough County’s $30 million).

“First, I’d say, I care more about the people of this state than I do the governments of this state,” Corcoran replied, a line he repeated later during the hour.

Discussing how the Legislature has been able to find loads of waste in a variety of state agencies (like VISIT Florida), the Speaker would have none of it.

“The concept that you can give somebody a $25,000 homestead exemption and put in on the ballot, and the result is this: that local governments have only two choices — they have to raise taxes, or cut essential services that really benefit their local community, is absolutely crap.”

Corcoran defended his opposition to the Florida Competitive Workforce Act, which would add sexual orientation and gender identity to the Florida Civil Rights Act of 1992.

He said, “suspect classes” like blacks or women deserve protection, but for others, “there are laws on the books that allow for the protection for being dismissed for any kind of egregious behavior.”

Corcoran added that government should be getting out of such “hyper-regulations.”

Later in the discussion, a man who identified himself as a lifelong Republican said he took offense to Corcoran’s comment.

Corcoran is reported to be strongly considering a run for Governor in 2018, but he said Friday that any such announcement will not be forthcoming anytime soon. He won’t make any such decision until he finishes his reign as Speaker after the Florida Legislative Session ends next March, a time that seems extremely late, especially as candidates like Putnam are already raising millions of dollars early in the process.

Then again, Corcoran is right now actively raising money in his PAC, which he says would go to other issues he cares about — if he chooses not to run for higher office. Those issues include a six-year ban on legislators lobbying and/or judicial term limits.

Despite the intense vibe in the room, Corcoran never lost his cool.

Talking about how he stays in touch with his legislative district, because he has to run every two years, Corcoran said he often attends community forums like this, “even though you guys aren’t in my district. And it sounds like that might be a good thing.”

With that, the crowd erupted in laughter.

(In the interest of full disclosure, it is important to note that Richard Corcoran’s political committees, like many other candidates, advertise on several Extensive Enterprises Media platforms.)