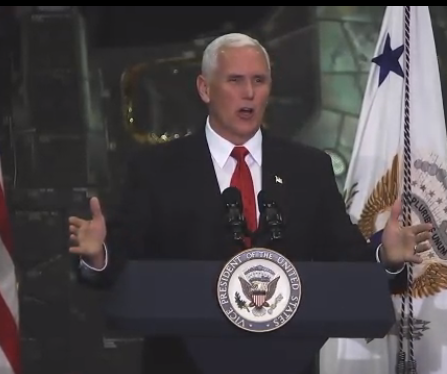 At the first major address by the administration of President Donald Trump on space policy, Vice President Mike Pence told a NASA gathering at the Kennedy Space Center that a new era is dawning of American leadership in space, and promised a return to the moon.

But Pence stopped there, offering almost no specifics on any Trump administration space policies, plans or ambitions, other than to lead in space, return to the moon, go to Mars, invest in space defense, and tap into the America’s commercial space industry for advancements of technology, space services, and innovation.

Of those, only the moon is a new goal. Throughout much of the administration of President Barack Obama, there was an internal and external debate for NASA and the American government about whether the agency’s longterm plan to send astronauts to Mars in the 2030s ought to include creation of a lunar outpost or at least stops at the moon. The Obama administration’s position was no.

“Here from this bridge to space our nation will return to the moon, and we will put American boots on the face of Mars,” Pence said inside the Kennedy Space Center’s iconic Vehicle Assembly Building.

It’s possible the American return to the moon might not even involve NASA, except for providing facilities at Kennedy Space Center. Some of the commercial space companies have talked about going to the moon themselves. One of them, Moon Express, is holding a press conference next week to announce and detail some of its plans.

And Pence spent ample time praising the commercial space industry, which has increasingly become an operations partner at Kennedy Space Center and elsewhere. Boeing, Lockheed Martin, SpaceX, United Launch Alliance, Orbital ATK, Blue Origin and other companies have leased space at or near Kennedy and are either operating private space endeavors from there or planning to there.

“I’m particularly excited to see the increased collaboration with our bourgeoning commercial space industry, so much in evidence here at the Kennedy Space Center,” he said. “The truth is, we’re going to continue to foster stronger partnerships between agencies and innovative industries across this country because we have so much to offer one another.”

Pence, whom Trump appointed last week to chair the renewed White House National Space Council – dormant since 1993 – appeared to defer any specifics until that council is operating. He promised a first meeting before the end of the summer. He promised to reach out to leaders in commercial space and academia.

Pence also spent much of his time praising the history and legacy of NASA, and assuring that that he and Trump want more of that. That drew warm though perhaps skeptical applause. If nothing else, that promise goes beyond what had been perceived of the past several administrations.

“Today I come to assure you the men and women at NASA, and all those with us at this gateway to the stars, that under President Donald Trump, America  will lead in space once again,” Pence said. “Welcome to a new era of American leadership in space.”