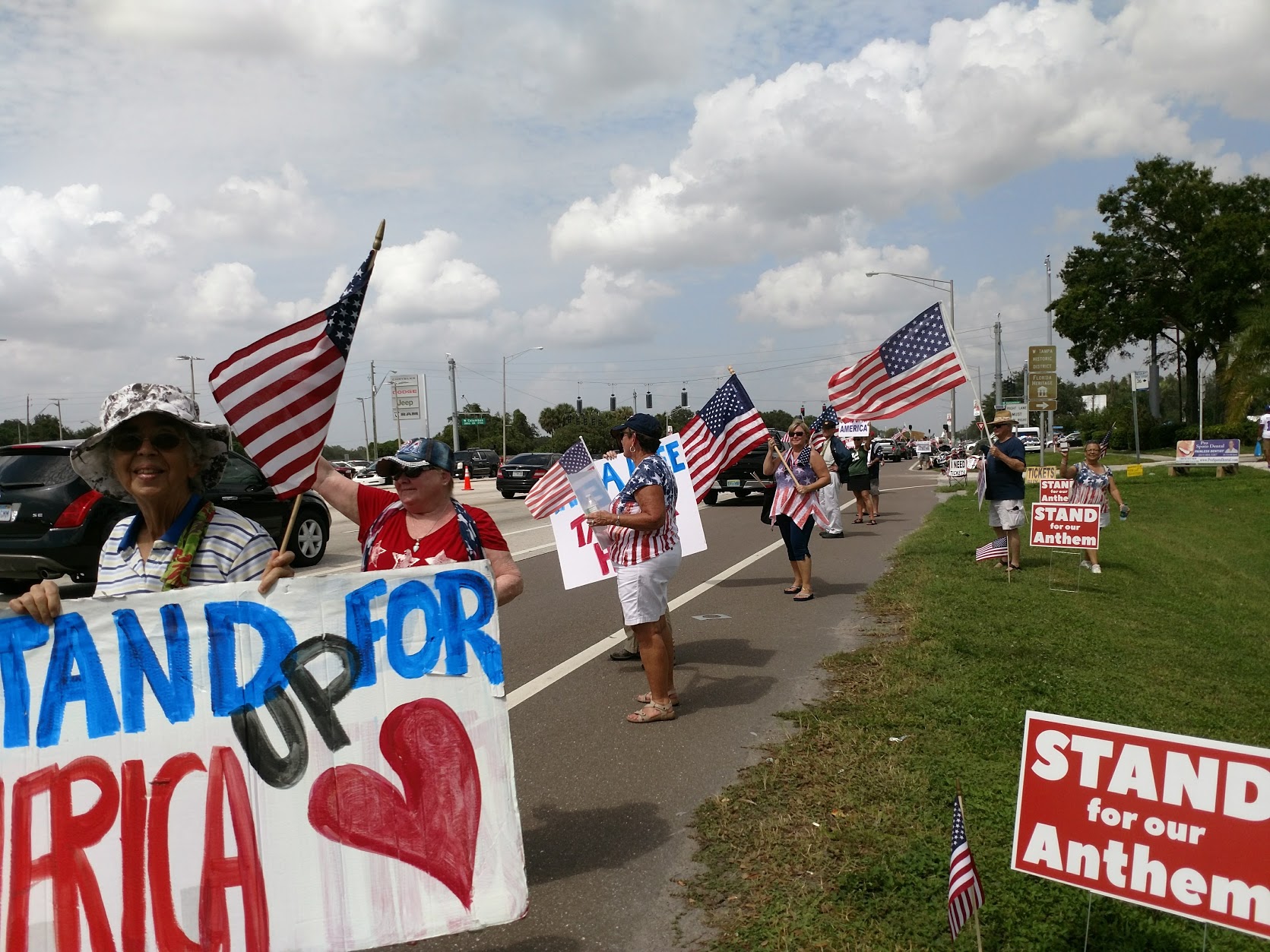 Angry at the NFL players who refused to stand during the national anthem, about fifty people protested at a rally Sunday just blocks from Tampa’s Raymond James Stadium, where the New York Giants faced the Tampa Bay Buccaneers .

“My attitude is, if my flag offends you, then I’ll help you pack,” said Jim Heckman. “You need to leave America if you can’t stand the flag.”

Heckman drove from Daytona Beach Sunday morning to the protest after learning about it on Facebook a day earlier.

His was the prevailing sentiment among those enduring the heat along Dale Mabry Highway.

“You show respect for our flag and for our country,” said Tom Timcik from Madeira Beach. “Those guys make millions of dollars playing a game. It isn’t going to kill them to show some respect for their country.”

“If they want to make a political protest, there are other ways to do it besides that,” Timcik added.

Former San Francisco 49ers quarterback Colin Kaepernick became the first NFL player to refuse to stand during the playing of the “Star Spangled Banner” during the 2016 exhibition season. He continued to ‘take a knee’ before every game the rest of last season.

Kaepernick said he was protesting institutional racism against African-Americans and minorities in the U.S.

When the preseason began in August, several other players joined in the protests. But the movement exploded last weekend when 180 players refused to stand for the anthem, in large part as a direct response to President Donald Trump‘s incendiary statements about the issue.

Two days earlier, at a rally in Alabama, Trump called players protesting the anthem “sons of bitches,” and said they should be fired.

In the week since, reaction to the protest has become a huge story. While some players took a knee before the anthem before the games starting at 1 p.m., only 11 players refused to stand for the actual anthem, according to ESPN’s Darrell Rovell.

“If they have an agenda,” Stair said, “they have to take it outside the football field.”

Others in the audience agreed, with a few acknowledging the issue of police brutality against blacks is legitimate — but suggesting they should use their celebrity status to hold a news conference (or a protest rally) to speak out.

“These guys are making $50 million? $25 million? It’s ridiculous,” said Christopher Dawson, a Tampa resident and U.S. Army veteran. “If they want to complain about inequality, the cops, all this stuff, they can do that in a lot of venues other than messing around with the national anthem and the flag,”

Some in the crowd dismissed the political issues that players like Kaepernick (now out of the league) and Seattle’s Michael Bennett say are necessary to discuss.

A few comments were much harsher.

Pinellas Park resident Jerry Kelly said blacks have only themselves to blame for any inequities they suffer. For 200 years, he added, African-Americans in the U.S. have held a “victimhood” mentality.

“They don’t have any job skills. They don’t have any education. And, frankly, they’re not working, because generations of welfare have destroyed the black family,” he said. “We’re not destroying them. They become racist. They hate white people. They hate this country that feeds and clothes them when no one else will.”

A woman standing next to Kelly — who called herself Sandy Lulu from Bradenton — said she tuned out the NFL last year after Kaepernick began kneeling before the anthem.

“I think they think they’re doing a good thing sticking together, and I think that they think they have unresolved issues, and they just really don’t know what the true facts or and what life is,” Lulu said. “If you think you’re oppressed, try living in a foreign country. If you think you’ve got problems, look what Venezuela is going through. Look at what Kim Jong-Un is doing to his people in North Korea.”

“You think you got problems?” she added. “You don’t got a darned problem in America!”

Haselden said she could forgive and forget those players if they now resume standing for the anthem. But what she can’t forgive is players trying to come up with “alternative” ways to protest, such as Rodgers, who asked the crowd at Green Bay’s Lambeau Field Thursday night to lock arms with fans sitting next to them.

“They need to put their hand on their heart,” Haselden demanded.