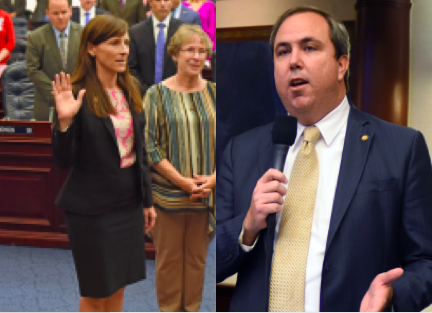 “Environmental crises don’t know it’s election season,” said Good, “and you don’t stop being an elected representative just because you are campaigning.”

The two Sarasota lawmakers hosted their event at Suncoast Technical College and heard from about 150 constituents about specific needs in the wake of algal blooms.

“We have to shine a spotlight on this issue and how people are dealing with it,” Gruters said. “It’s a financial crisis. Our economy here is still largely based on tourism.”

Harmful algal blooms for weeks have caused no-swim orders and shut down beachfront restaurants along much of the coast, and also present a health risk as toxins release into the air.

“Land is a natural filter for our water supply,” she said. She also wants to stop fertilizer runoff that feeds algal blooms with nutrients.

Gruters said it’s important for industries contributing pollutants to bear some cost for fixing the problem, but noted many pollutants contribute to red tide. He says one of his top legislative priorities will be pushing limitations on the amount of new growth in Florida using septic tanks instead of hooking into sewer systems.

“My position is everybody who moves to Florida is to blame,” he says.

He wants solutions presented in Tallahassee to be led by scientific input, and he plans to fight for better funding for Mote Marine Laboratory to study the issue.

As for the bipartisan nature of the event, Gruters said having a Republican and Democrat working together helped diffuse potential blame game scenarios.

Of course, Gruters and Good aren’t just any rank Democrat and Republican.

Good surprised the national political world in February by winning a special election in a district won by Donald Trump in 2016. She’s facing re-election in November for a seat Republicans badly want back, and will likely face former Republican state Rep. Ray Pilon in November in District 72.

As for Gruters, he’s chairman of the Republican Party of Sarasota, and co-chaired Trump’s presidential campaign in Florida. He’s looking to move to state Senate in 2016 representing District 23, but has to defeat Democrat Faith Olivia Babis.

But water is thicker than politics.

Gruters said as the political season heats up, he’s sure he and Good will play their partisan parts. But in their public service, they have to work together toward solutions.

“Margaret Good and I have a mutual respect for each other,” he said. “When there are issues where we can fight together, we don’t talk about our races. Just about how we can make our community and state better.”