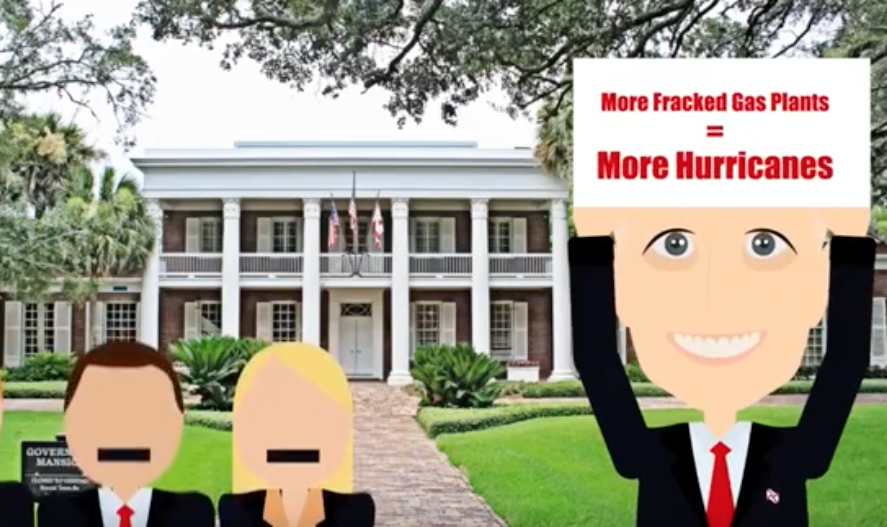 The Sierra Club is launching an internet video ad blasting Gov. Rick Scott in advance for the prospect he might approve a natural gas power plant project in Florida, charging that such a decision would increase climate change and mean bad news for Puerto Rico.

The last part – bad news for Puerto Rico – is the video’s main point and message, as the video is in Spanish and will be placed on social media to target Puerto Ricans in Florida.

The video is a coarse animation that makes connections between increased burning of fossil fuels, climate change, powerful hurricanes, and devestation of Puerto Rico. The video features a crude cartoon figure of Scott [along with Adam Putnam, Jimmy Patronis, and Pam Bondi] in front of the Florida governor’s mansion singing the chorus of a song, essentially declaring, “It’ll destroy Puerto Rico.”

The Sierra Club video also makes issue of the prospects that the power plant’s fuel, natural gas, would be obtained through fracking, the controversial underground-cracking extraction process. However, there’s no clear indication that the project in question, a planned $888 million overhaul and expansion of the power plant in Dania Beach, would necessarily use gas produced through fracking.

The Florida Public Service Commission approved the plan in March. The Florida Power Plant Siting Board, essential Scott and the Florida Cabinet, was set to vote on a final decision Tuesday. But the vote has been indefinately tabled.

Speaking for the Sierra Club, Susannah Randolph said Monday that under Florida law the board now has until Sept. 28 to make a final decision, unless the plant’s owner, Florida Power & Light, requests a delay.

The one-minute, 28-second video will run heavily in Puerto Rican communities in Florida on Facebook and YouTube in advance of the Siting Board hearing, according to a news release from the Sierra Club.

Neither Scott’s executive office of the governor nor his U.S. Senate campaign was available for an immediate response Monday.

“Florida’s Puerto Rican communities know better than most the true cost of climate disruption,” Gonzalo Valdes, Florida Beyond Coal organizer for the Sierra Club, stated in the news release. “From the terrible human and economic toll of Hurricanes Maria and Irma, to the threat of sea level rise, communities here, and on the island, are suffering from effects of climate change made worse by our reliance on fossil fuels like coal, oil, and gas.

“Now, on the one-year anniversary of Hurricanes Irma and Maria, Governor Scott and his siting board owe it to this community to deny the Dania Beach fracked gas plant expansion and instead utilize abundant and affordable renewable energy sources like solar,” he added.