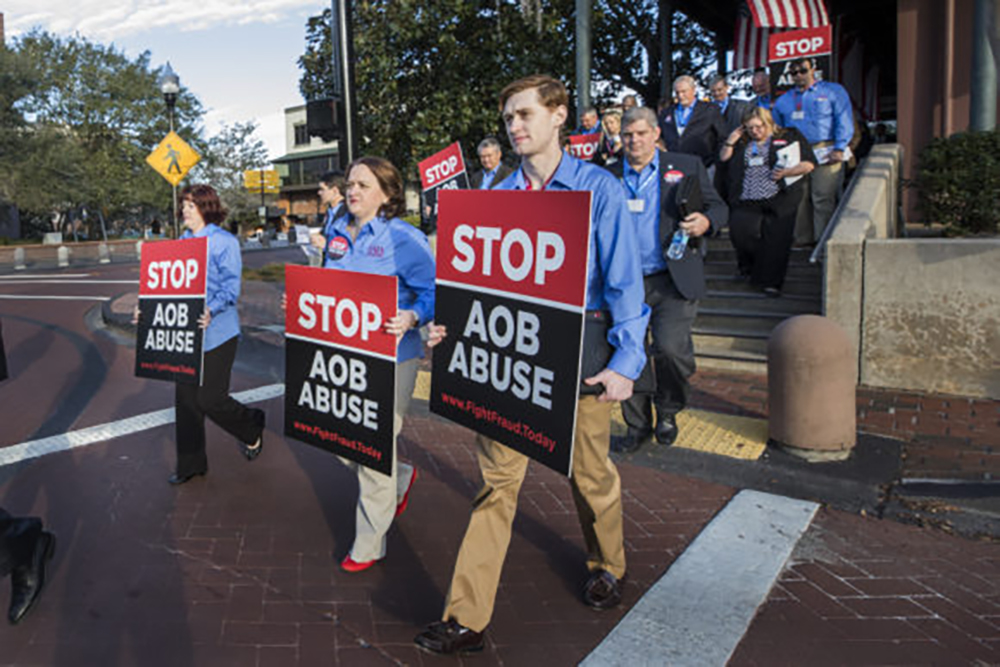 TALLAHASSEE, FLA. 1/24/18-More than 125 insurance agents from across Florida, along with members of the Consumer Protection Coalition (CPC), march to the Florida Capitol on Wednesday to highlight the need for Assignment of Benefits (AOB) reform.

The Personal Insurance Federation of Florida (PIFF) announced a suite of priorities for the 2019 Legislative Session on Tuesday, with assignment of benefits, or AOB, reform topping the list.

“With the holidays over and the inaugural imminent, we’re ready to work with our Governor and Cabinet and the Legislature to tackle important issues affecting Floridians,” said Michael Carlson, president of PIFF. “We must address some outstanding issues – like AOB and bad faith reform – that are festering in this state.

“We look forward to being a helpful resource to policymakers wanting information and thoughtful solutions to these issues, and we are excited to offer every tool we have to reach positive outcomes this year.”

AOB is a process that allows policyholders in need of repairs to sign over the benefits of their insurance to a third-party who makes the repairs and goes after insurance companies for reimbursement, often via lawsuit.

PIFF is looking for changes to Florida’s “one-way” attorney fee law requiring the loser of a lawsuit to handle attorney fees for the winner. The federation said it “sees this as the best solution for reducing AOB abuse and the resulting increase in costs for consumers.”

PIFF also wants to level the playing field with trial lawyers when it comes to “third-party bad faith” — a process that encourages policyholders to be uncooperative during attempts to settle a claim in the hope that an insurance company will make a mistake. The group says the current process “creates a perverse incentive for claimants to ‘game’ the judicial system to bypass policy limits and increase insurance coverage amounts.”

The remainder of PIFF’s policy goals are in the auto insurance realm. Atop the list are reforms is another AOB issue: Auto glass “harvesting,” a practice where shady vendors make false claims for windshield repairs. PIFF is also seeking a system for law enforcement officers and the Department of Highway Safety & Motor Vehicles to retrieve drivers’ proof of insurance online.

PIFF is also hoping for lawmakers to spell out autonomous vehicle rules. The insurance group wants law enforcement, state and federal regulators, insurers and parties to a crash to have access to any data an AV records, and says that info should be usable in insurance ratemaking and underwriting.

Finally, if lawmakers toy with repealing no-fault insurance, as they did last year, PIFF wants the replacement system to adhere to some ground rules. Namely, a repeal of PIP should be tied to “bad faith” reform and should forego mandatory medical coverage while keeping premiums steady for customers.

PIFF represents national insurance carriers and their subsidiaries, including many of the state’s top auto and homeowners insurance companies.