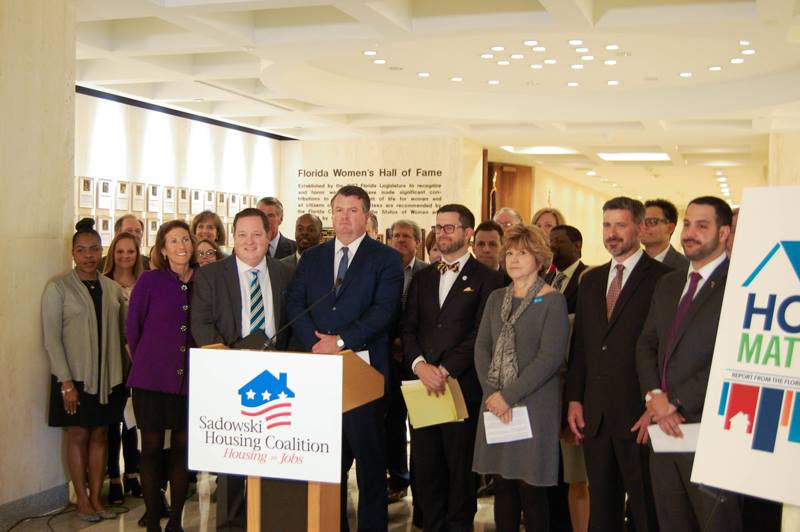 The Sadowksi Coalition cites data that supports an end to housing sweeps.

With a friendly Governor’s budget behind them, supporters are again rallying to cease raids to the state’s affordable housing fund.

The Sadowski Coalition met Tuesday in Tallahassee to highlight the 2019 Home Matters Report from the Florida Housing Coalition and to call on the Legislature to stop sweeping dedicated affordable housing dollars into other parts of the budget.

The Florida Housing Coalition bills itself as “the foremost authority in Florida on affordable housing.” Its latest report suggests that the need is great for affordable housing, as “922,000 very low-income households pay more than half their income on housing.”

The Sadowski Coalition is asking lawmakers to leave affordable housing dollars untouched. The pool of money — known as the Sadowski Trust — is typically raided by lawmakers to pay for other parts of the budget, instead of the two programs funded by the trust: the State Apartment Incentive Loan Program (SAIL) and the State Housing Initiatives Partnership Program (SHIP).

“The Sadowski Coalition asks the Florida Legislature to consider this amazing opportunity they have to create jobs and a massive economic benefit, while helping their constituents avoid homelessness, find affordable rentals or realize the dream of homeownership,” said Jaimie Ross, president and CEO of the Florida Housing Coalition.

The plea from Ross — who was flanked at the Capitol Tuesday by representatives from Associated Industries of Florida, the Florida Chamber, Habitat for Humanity of Florida, Florida Home Builders Association and Florida Realtors — might have more weight this year.

Republican Gov. Ron DeSantis in his proposed budget recommended zero sweeps to the Sadowski Trust. He wants $243 million for SHIP and $95 million for SAIL.

DeSantis, who said during an unrelated press conference earlier on Tuesday that he had not had conversations with House and Senate leaders about ending raids to the affordable housing pool, has drawn praise from the proposal, including from Democrats.

“The great news in 2019, is that our agency’s request was honored by Governor DeSantis,” Price said.

Last year lawmakers swept $182 million from the Sadowski Trust. The report figures that if the $352 million the Sadowski Trust is projected to hold this year is spent on SHIP and SAIL, it will result in a $4 billion positive economic impact.

“We can make enormous strides in avoiding homelessness and ensuring Florida’s workforce and most vulnerable residents are able to live in safe and secure homes, but only if we use the money in these trust funds as it was intended,” Ross said.

previousLast Call for 2.26.19 — A prime-time read of what's going down in Florida politics

nextCharles Snellgrove: Assignment of benefits victim; don’t make the same mistake we did