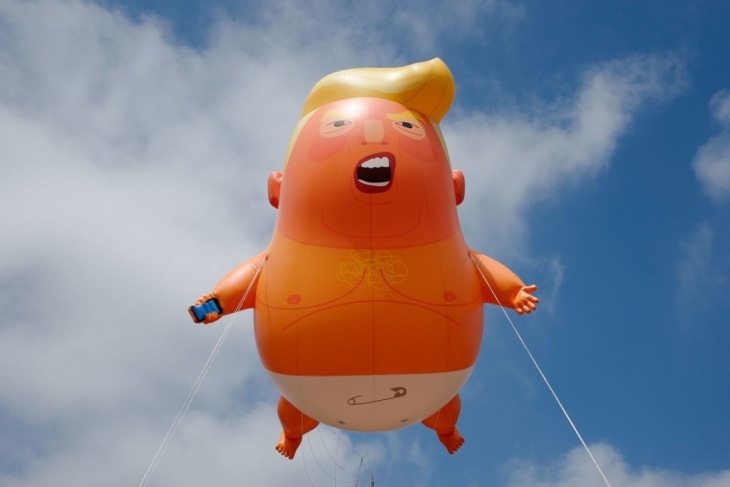 The larger than life balloon designed to look like an indignant baby Donald Trump will fly in Orlando’s “Win With Love” rally on June 18.

Even though the infamous Trump baby balloon made headlines recently when a British Trump supporter deflated it in a stabbing display of vandalism for which she was arrested, the angry, orange baby that delights spectators as it travels around the world will fly again — right here in Florida.

“We plan to win with love, and we LOVE Baby Trump,” said Ida Eskamani, organizer of Win With Love, in a recent statement. “The Baby Trump balloon has become an internationally recognized symbol of President Trump’s regular temper tantrums that endanger this country and our desperate need for an adult in the White House. It is also a symbol of resilience; in the midst of darkness, we can find joy in a giant, inflatable baby. We’re ready to bring Baby Trump to Orlando.”

The event which takes place strategically on the evening before Juneteenth, a celebration of the end of slavery, also falls between the 3-year anniversary of the Pulse massacre, and just before the 50th anniversary of the New York City Stonewall Riots. Organizers are currently accepting donations to make the event more accessible and provide interpretation services.

The balloon, which originated in the U.K. in 2018 when it flew over Parliament Square in London during an official visit by the president, has been spotted internationally in Ireland, Argentina and France, as well as at various locations in the U.S. according to Wikipedia.

This will be the balloon’s first time taking to the warm summer air in Orlando, but it has been viewed in Florida before, near the location of Trump’s Mar-a-Lago resort.

For more information about the Win With Love Rally visit the Facebook event page.