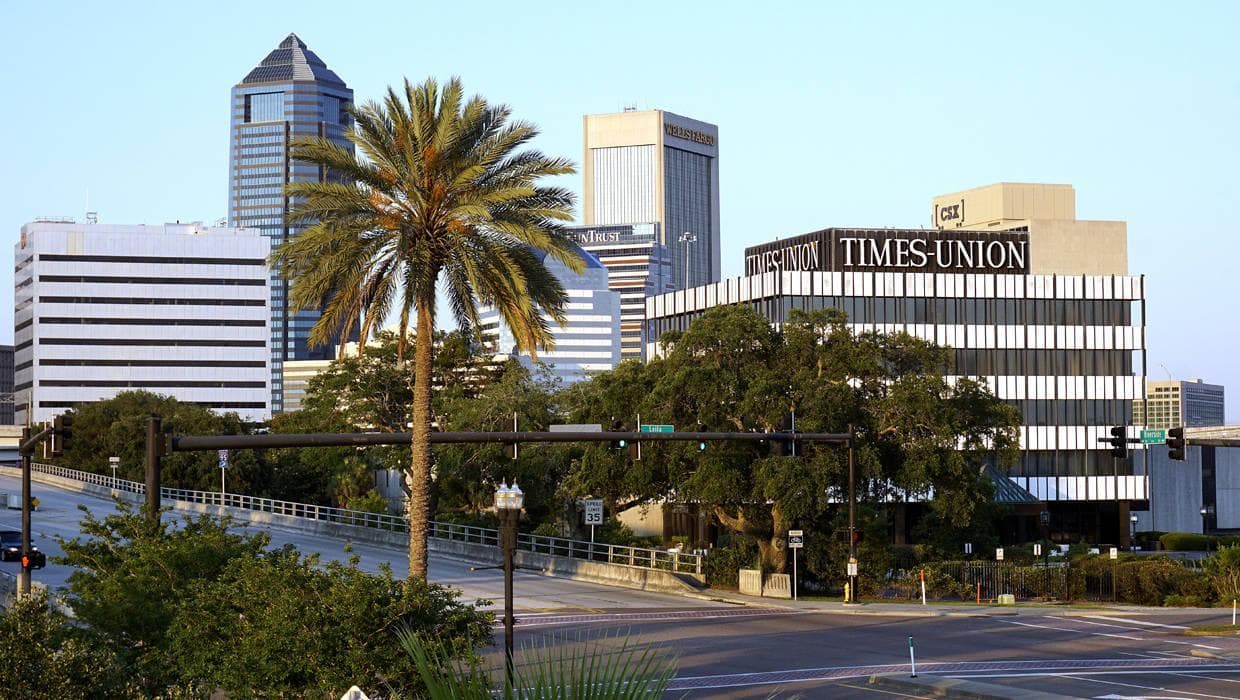 It was another blue Monday this week for the newspaper industry.

GateHouse (the parent company of the Florida Times-Union and St. Augustine Record) announced it is merging with Gannett.

For those who like efficiencies in production, what’s more efficient than one company owning 29 dailies in Florida?

For local reporters, especially those who recall the changeover from Morris Communications to GateHouse, it was seen as one more trauma for the PTSD bonfire.

GateHouse, we understand, may have laid off some T-U writers weeks back, when corporate was axing people at other outlets.

However, the shop unionized; pending a bargaining agreement, they couldn’t lay anyone off.

Uncertainty at the T-U — and most other local papers — is becoming part of the game.

In Jacksonville, the merger comes at a time when reporters (specifically Nate Monroe and Emily Bloch) have ticked off City Hall with reporting on JEA privatization and the proposed School Board tax referendum.

Locals who oppose what Monroe calls “City Hall Inc.” thrill to their dispatches, “samizdat” scrolls for those who don’t hew to a government of, by, and for the donor class.

As a result, T-U reporters get shut out of press events. Communication with the Mayor’s Office is beyond fractured — an interesting position for a daily paper.

On Twitter, the back and forth continues, as people congratulate the writers for telling neglected truths. Nevertheless, attrition continues in the print runs. Jobs that once were done here — like layout and so much else — are now done elsewhere.

The local reporting gets done. But institutional backing is a different matter.

The era of the truly local paper is over. Soon enough, people will forget that it ever existed.

Sen. Rob Bradley, a Republican from Fleming Island, was key to getting the state’s nascent industrial hemp program through.

This week it became clear Bradley wasn’t through with the cannabis cousin, as Sen. Bill Galvano made Bradley one of his picks for the state industrial hemp council.

Bradley, the Fleming Island Republican who also chairs the chamber’s Appropriations panel, “has been a major proponent of the implementation of the State Hemp Program and its Advisory Council, and understands the potential for hemp to become a huge economic driver in our state,” said Galvano, a Bradenton Republican.

In a statement, Bradley said there is “a great deal of opportunity, both for Florida’s agricultural community and our economy, that comes with the production of industrial hemp in our state.”

The Industrial Hemp Advisory Council was created in 2019 by a bill (SB 1020) sponsored by Bradley.

It was “Ashley Moody Monday” in Jacksonville, with the Attorney General celebrating the resolution of an “automotive fraud” case.

The former owners of Jacksonville’s Riverside Chevrolet were hit with over a million dollars in fines for phony warranties and failing to pay off clients’ liens.

The dealership is under new ownership and has been rebranded accordingly, and the good news allowed the AG to kick off a week focused on helping consumers steer clear of deceitful car dealers.

The #SteerClearOfFraudOAG initiative, launched in conjunction with the Department of Highway Safety and Motor Vehicles, is intended on ensuring events like the Riverside Chevrolet fraud don’t happen again.

Moody said the departments are “shifting into high gear to protect Florida drivers from all types of automotive fraud.”

Direct election of Duval County School Board members may be a thing of the past, should a bill sponsored by Rep. Jason Fischer make it through Tallahassee.

Fischer sent the legislation to the current School Board, soliciting input ahead of its consideration as a “local bill” in October by the Duval County Legislative Delegation.

Fischer was once a member of the School Board himself. He found the experience frustrating.

There is some question as to whether the Florida Constitution allows for an appointed School Board. However, Fischer clearly sees a window to move control of the body to one of his key political allies.

At Tuesday night’s School Board meeting, members were not thrilled with the proposal, with Warren Jones suggesting the 2020 referendum proposal was linked to the Mayor’s desire to have an appointed board that can control where the monies would go.

Sam Garrison, the Orange Park lawyer who looks poised to replace termed-out Rep. Travis Cummings in HD 18, continued to raise money in July for his 2020 campaign.

Garrison is the law partner of Senate Appropriations Chair Rob Bradley in Clay County, which suggests that he has the inside track. There are no other Republicans running.

The bulk of the donations in July were from inside the district, which encompasses northern Clay County.

Meanwhile, the Duval County School Board saw a triumvirate of big-time lawyers make the case that they actually have the right to put a sales tax referendum on the ballot.

The Florida Times-Union is reporting that said the City Council could not keep the referendum off the ballot.

This contradicts the position of Jacksonville’s General Counsel, which has been used to justify an extended review process where the City Council has essentially become an oversight committee for the tax referendum.

In a surprise to our observer in the courtroom, a brief reprieve was granted Tuesday to a former Jacksonville City Councilwoman seeking to represent herself in an upcoming federal fraud trial.

Katrina Brown, facing 37 counts for charges stemming from misused economic development funds, got a one-month continuance, delaying what would have been an August beginning of her pro se defense.

Katrina and former colleague Reggie Brown face 38 counts of conspiracy to defraud, according to federal prosecutors.

The feds are accusing the pair of extracting hundreds of thousands of dollars for personal use from a Small Business Administration-backed loan provided for Katrina Brown’s family’s barbecue sauce plant.

While Brown wanted a six-month reprieve, the judge suggested a 30-day continuance, which would be a Sept. 23 trial term.

“There are no further continuances … we will plow through. Nothing is going to change the fact that we are going to trial [in September],” Morales Howard warned.

Another accident on Jacksonville roadways: a familiar story. But this one, reports WJXT, had a unique twist.

“News4Jax was first alerted that Curry was at the scene by a concerned viewer who thought the Mayor might have been involved in the crash. When we looked into it, we learned that Curry, who lives in the area, happened upon the aftermath of the crash and stopped to offer help and make sure everyone was OK,” reports THE Local Station.

The victim’s mother was beyond grateful.

“From the bottom of my heart, he doesn’t understand, for someone to come and literally just stay there, I don’t care who you are, to stay there and to make sure whoever is in the accident is going to be fine,” the mother said.

After decades of trying to make Jacksonville’s downtown “happen” again, evidence of progress is beginning to manifest.

First Coast News is reporting that the neighborhood is finally above 5,000 residents.

New construction could push the population close to 7,000. Proposed construction, should it manifest, would push higher, close to 12,000.

With development expected along Bay Street, if economic momentum holds a bit longer Downtown may (finally) turn a corner into becoming what city leaders have wanted for decades.

Some Northeast Florida legal personages are looking to level up and become appeals court judges, per the Jax Daily Record.

With two vacancies on the 1st District Court of Appeal, Jacksonville area lawyers comprise seven of the 26 applicants.

Among the names you may know is Craig Feiser, an assistant general counsel for the city of Jacksonville from whom media members typically request records. Joining him is another AGC: Gilbert Feltel, Jr.

Only one current judge from Duval is in the mix: Eric Roberson.

While the St. Johns River Ferry is still out of commission for maintenance, the Jacksonville Transportation Authority scored some D.C. ducats during the downtime.

Specifically, a $3.9 Million grant, via the Federal Transit Administration.

Per a news release: “The grant funding will go toward the next phase of upgrades to the St. Johns River Ferry, including $5.6 million worth of work to bulkheads, catwalks, warehousing, mooring bollards and other improvements to both the Mayport Village and Fort George Island facilities.”

“When the JTA took over operation of the St. Johns River Ferry in 2016, we also embarked on an ambitious plan to address needed upgrades and maintenance issues that had accrued over several decades,” said JTA CEO Nathaniel P. Ford Sr.

“The next phase of work is only possible because of the strong relationships we’ve built with our partners in Congress and with the FTA, who have seen firsthand how important this vital mode of transportation is to the thousands of customers who sail with us every day,” said Ford.

Following last night’s preseason game, the Jaguars will not see the Baltimore Ravens anytime soon. The only 2019 matchup would come in the postseason as the teams are not scheduled to meet during the regular season.

Thursday’s game was the culmination of a week where the two squads spent some quality time together. Jacksonville accepted the Ravens’ invitation to hold multiple joint practices at the Ravens’ facility in Owings Mills, Maryland before the game.

Players will frequently talk about training camp, where they practice in the heat and get a bit tired of each other. Scuffles will often follow, as evidenced by last year’s fracas between Dante Fowler and Yannick Ngakoue.

The Jaguars, as well as the Ravens, likely enjoyed the opportunity to hit someone else other than their teammates.

Perhaps it came as a surprise that Ngakoue made the trip to Maryland. After engaging in a holdout seeking a new contract, the star defensive end reported to camp without that contract.

“At the end of the day, they had a chance to sign me for a long-term deal, but it didn’t get done so it is what it is,” Ngakoue told reporters Sunday. “I’m just here like I said. I love football. I love my teammates and I’m here to play games.”

While the projected starters had limited, if any, playing time Thursday, there is plenty of optimism in Jaguars nation. Free-agent quarterback Nick Foles is showing what he can do, while running back Leonard Fournette is drawing attention for his receiving skills as well as the running game.

“But he’s someone we can use in the passing game and he has skill,” said head coach Doug Marrone. “Any time we can get him the ball — whether it’s throwing him the football, pitching him the football, whatever it may be — we have an opportunity to break tackles, and obviously, he can run very well.”

Next week, Foles will be front and center as his former team, the Philadelphia Eagles, come to TIAA Bank Stadium for the Jaguars’ preseason home opener.