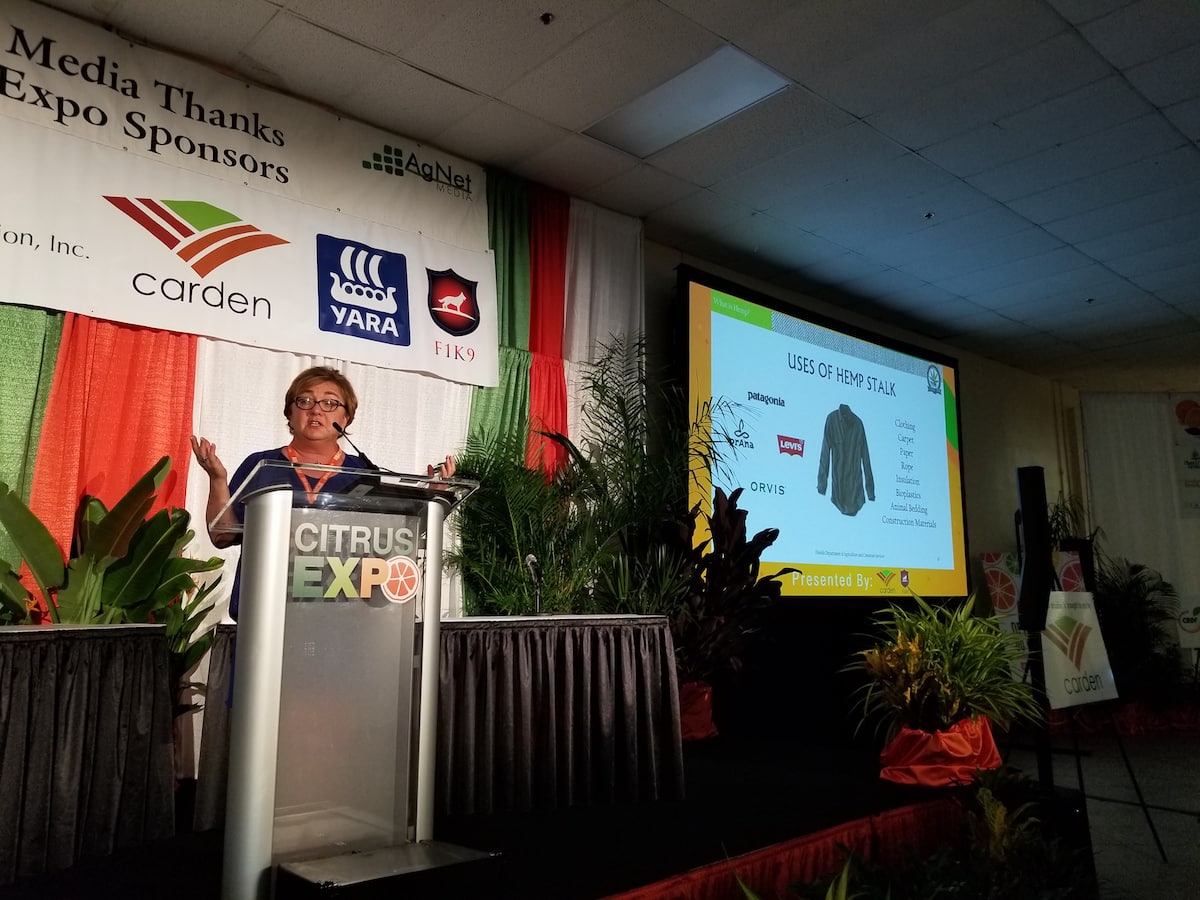 The Department of Agriculture will issue permits shortly.

Hemp products are more than a fad, according to Florida’s cannabis czar, Holly Bell.

Bell, director of cannabis for the Florida Department of Agriculture and Consumer Services, spoke of the 25,000 uses for hemp.

“The CBD craze is what the plant is used for and what will get this industry going,” she said, but hemp will remain a valuable commodity.

Bell cites uses like making fabric and clothing out of hemp; it’s a sustainable alternative to non-biodegradable polyesters. It can also be used for beauty products, health supplements and even to make concrete-like building supplies.

The product has been all but banned in the U.S. for the past 70 years, but a federal farm bill passed in 2018 allows states to allow the crop to be grown. Florida responded with legislation, signed into law in June, laying groundwork for planting hemp in the Sunshine state.

To date, two pilot programs affiliated with University of Florida and Florida A&M University have been the only ones planting seeds so far. But once the Agriculture Department finalizes administrative rules, which Bell promised will happen soon, then growers can start seeking licenses.

Jerry Fankhauser, director of UF’s Institute of Food and Agriculture Sciences industrial hemp program, said farmers jumping in early should be able to be part of a growing market.

He did note there’s still a lot of unknowns in the new U.S. business of selling hemp.

“It’s still the Wild Wild West in terms of seed pricing and quality plant material,” he said. “So once you get your permit you still need to do your homework. We have seen varieties performing well in the field, and as we learn more we will publish information.”

Growers feel anxious to learn more before making up their minds about growing hemp.

Bill Riddling, who runs Riddling Groves on 17 acres in Melrose, said he wants to diversify beyond citrus. The threat of citrus greening shows the need. But he worried about heavy regulations around hemp.

“I hope it’s not going to be a huge bureaucracy of this person doesn’t know what this person is doing,” he said. “It sounds like you are dealing with both the USDA and the state of Florida. I’m already doing that. It’s not there’s anything wrong with it but it adds to taking my time.

Bell tried to assuage those concerns among Florida farmers, though she couldn’t promise a completely deregulated world.

One grower worried about limits on THC levels, which must be 0.3 or less or the plants will be classified as marijuana instead of hemp. Farmers must test their own crops, and the state will retest if high levels are found. But if THC levels are indeed too high, crops will be destroyed.

Bell said that in Tennessee, which has similar regulations, that has only taken place one time. And as genetics on hemp plants advance in the U.S., the risk will become lower.

Another risk, especially for farmers wary of how imported diseases have hurt citrus yields, is the inventory from outside the U.S.

Farmers fear overseas sources will have better products and dangerous contaminants from soils around the world.

As it happens, hemp holds promise as a plant that cleans soil, and it gets planted around nuclear disaster zones to draw out radiation from the soil.

But some fear hemp grown outside the U.S. that makes it to consumers here could bring new contaminants and disease. Still unclear is what effect hemp will have as an invasive, non-native species.

Bell said for the moment, there’s no embargo on the goods, but she suspects the product will be regulated thanks to heavy testing requirements. The federal government still closely governs hemp imports, just as states restrict what gets grown here.

Riddling sees hope and will strongly consider jumping into the business if it’s a simple process to navigate.

“I was not really in favor of medical marijuana; it seems to me to cause too many problems having to guard a crop,” he said. “But if it’s hemp, and you are not going to get high off it and it doesn’t destroy my moral values, then why not?”