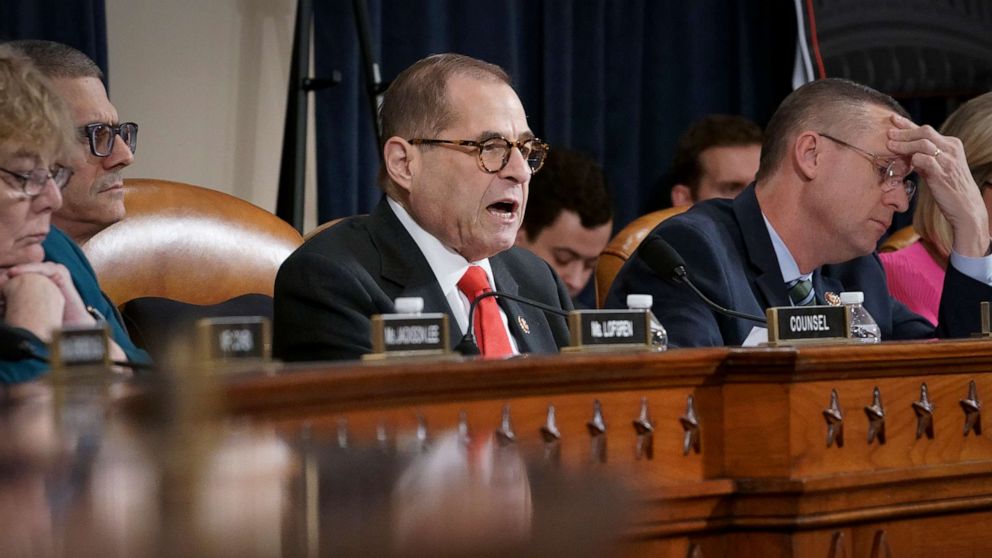 The U.S. House of Representatives Judiciary Committee has taken the first steps toward voting on articles of impeachment against President Donald Trump, beginning a marathon two-day session to consider the historic charges with a lively prime-time hearing at the Capitol.

Democrats and Republicans used the otherwise procedural meeting Wednesday evening to deliver sharp, poignant and, at times, personal arguments for and against impeachment. Both sides appealed to Americans’ sense of history — Democrats describing a strong sense of duty to stop what one called the president’s “constitutional crime spree” and Republicans decrying the “hot garbage’’ impeachment and what it means for the future of the country.

Rep. David Cicilline, a Democrat from Rhode Island, asked Republicans standing by Trump to “wake up” and honor their oath of office.

Republican Rep. Mike Johnson of Louisiana responded with his own request to “put your country over party.”

Rep. Val Demings, the Democrat from Orlando, told the panel that, as a descendant of slaves and now a member of Congress, she has faith in America because it is “government of the people” and in this country “nobody is above the law.”

Freshman Democratic Rep. Lucy McBath of Georgia emotionally talked about losing her son to gun violence and said that while impeachment was not why she came to Washington, she wants to “fight for an America that my son Jordan would be proud of.”

Republican Rep. Jim Jordan of Ohio said Democrats are impeaching because “they don’t like us” and read out a long list of Trump’s accomplishments.

The committee is considering two articles of impeachment introduced by Democrats. They charge Trump with abuse of power for asking Ukraine to investigate Joe Biden while withholding aid as leverage and with obstruction of Congress for stonewalling the House’s investigation.

On Thursday, the committee will likely vote to send the articles to the full House, which is expected to vote next week. That could come after hours of debate over Republican amendments, though the articles aren’t likely to be changed. Democrats are unlikely to accept any amendments proposed by Republicans unified against Trump’s impeachment.

Democrats are also unified. They have agreed to the language, which spans only nine pages and says that Trump acted “corruptly” and “betrayed the nation” when he asked Ukraine to investigate Joe Biden and the 2016 U.S. election. Hamstrung in the minority, Republicans wouldn’t have the votes to make changes without support from at least some Democrats.

The Wednesday evening session, the beginning of markup of House Resolution 755, which contains the two articles of impeachment, lasted more than three hours, with opening statements from lawmakers on both sides of the aisle.

House Judiciary Committee Chairman Jerrold Nadler opened the hearing by making a final argument for impeachment and urging his Republican colleagues to reconsider. He said the committee should consider whether the evidence shows that Trump committed these acts, if they rise to the level of impeachable high crimes and misdemeanors and what the consequences are if they fail to act.

“When his time has passed, when his grip on our politics is gone, when our country returns, as surely it will, to calmer times and stronger leadership, history will look back on our actions here today,” Nadler said. “How would you be remembered?”

Republicans are also messaging to the American people — and to Trump himself — as they argue that the articles show Democrats are out to get the president. Most Republicans contend, as Trump does, that he has done nothing wrong, and all of them are expected to vote against the articles.

The top Republican on the panel, Georgia Rep. Doug Collins, argued that Democrats are impeaching the president because they think they can’t beat him in the 2020 election.

Democrats think the only thing they need is a “32-second commercial saying we impeached him,” Collins said.

“That’s the wrong reason to impeach somebody, and the American people are seeing through this,” Collins said. “But at the end of the day, my heart breaks for a committee that has trashed this institution.”

Republicans are expected to offer an array of amendments and make procedural motions on Thursday, even if they know none of them will pass. The Judiciary panel is made up of some of the most partisan members on both sides, and Republicans will launch animated arguments in Trump’s defense.

Earlier Wednesday, Collins said the GOP would offer amendments but said they’d mainly be about allowing more time to debate.

“Remember, you can’t fix bad,” Collins said. “These are bad, you’re not going to fix it.”

In the formal articles announced Tuesday, the Democrats said Trump enlisted a foreign power in “corrupting” the U.S. election process and endangered national security by asking Ukraine to investigate his political rivals, including Biden, while withholding U.S. military aid as leverage. That benefited Russia over the U.S. as America’s ally fought Russian aggression, the Democrats said.

Trump then obstructed Congress by ordering current and former officials to defy House subpoenas for testimony and by blocking access to documents, the charges say.

Trump tweeted that to impeach a president “who has done NOTHING wrong, is sheer Political Madness.”

The House is expected to vote on the articles next week, in the days before Christmas. That would send them to the Senate for a 2020 trial.

Senate Majority Leader Mitch McConnell said Tuesday that he would be “totally surprised″ if there were the necessary 67 votes in the chamber to convict Trump, and signaled options for a swift trial. He said no decision had been made about whether to call witnesses.