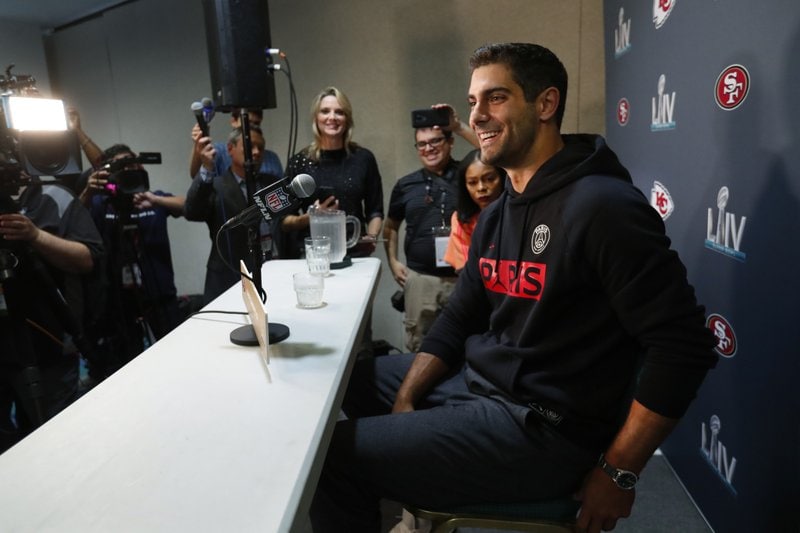 He also has become a leader of the team, getting praised as being “one of the guys” in the locker room.

Jimmy Garoppolo had a front-row seat in the best classroom on the best way to prepare for being a starting quarterback in the Super Bowl.

After watching Tom Brady prepare for two Super Bowl wins as his backup on New England, Garoppolo now gets the chance to translate those lessons into his first trip as a starter for the San Francisco 49ers.

“I think just how calm he was,” Garoppolo said about what he learned watching Brady prepare for wins over Seattle following the 2014 season and Atlanta two years later.

“Everyone says you’ve got to treat it like another game, just the way he actually he did it. I was up close and personal, picking up everything I could, seeing how he went about his business and everything. And obviously it worked out the two times that I was there with him.”

Brady is the most accomplished Super Bowl passer there is, making nine trips to the big game and winning six of them, including the two with Garoppolo as his backup.

Both those wins were memorable ones with the Patriots overcoming a 10-point deficit in the fourth quarter to beat the Seahawks and then rallying from 28-3 down to beat the Falcons in overtime.

The work for those comebacks began long before Brady went on the field.

“You could see it, how he is, his body mannerisms, everything, just how he prepares for it makes him confident on Sunday,” Garoppolo said. “And so, I’m trying to do the same thing, be ready to go and we’ll see what happens.”

Garoppolo said he received a congratulatory text message from Brady as he prepares for the game. Garoppolo will try to join former Niners great Steve Young and Jeff Hostetler as the only quarterbacks to be active for a Super Bowl win as a backup quarterback to later go on and win the title.

If that happens, the 49ers will have the Patriots to thank as the team that has played in the past three Super Bowls still has an impact on this year’s game.

The rebuild of the 49ers was fast-tracked midway through the 2017 season when the Patriots offered to trade Garoppolo to San Francisco for a second-round pick.

With Brady showing no signs of slowing down or wanting to retire and Garoppolo set for free agency the following spring, coach Bill Belichick decided to offer him up to a franchise he respected.

“It was a big step in our ascension as an organization,” general manager John Lynch said. “He made us better as an organization instantly. He’s a winner. A lot of that is just inherently who he is but I think the ‘Patriot Way’ helped shape that as well. He had great experiences there. All he cares about is winning.”

That was evident from the day Garoppolo arrived in San Francisco to join a team that started its first season under coach Kyle Shanahan with nine straight losses.

Garoppolo began learning the offense immediately and stepped in late that season to win the final five games as a starter.

That performance led Shanahan to change plans and offer Garoppolo a $137.5 million, five-year deal that offseason instead of following his original plan of pursuing Kirk Cousins in free agency.

“He just blew our minds, the success he had when he was out there with very little preparation and a little foundation of the offense,” Shanahan said. “By the time that season ended, I thought it would be hard for him to do, but he made our decision very easy.”

Garoppolo’s rise was delayed by a season-ending knee injury in Week 3 against Kansas City in 2018 but he has played a big role in the Niners success this year even when he isn’t asked to throw much as when he had only eight attempts in the NFC championship game against Green Bay.

He has four fourth-quarter comebacks and ranked tied for second in the league with three games of at least four TD passes in the regular season.

He also has become a leader of the team, getting praised as being “one of the guys” in the locker room but also showing the willingness to crack down when necessary.

“He’s not just one of the guys, he’s the top guy,” right tackle Mike McGlinchey said. “He’s our leader, he’s our guy, he’s the top dog in our locker room. In those types of moments, he has every credibility to stay stuff like that because of what he’s done and what he’s built and the work he’s put in day in and day out.”