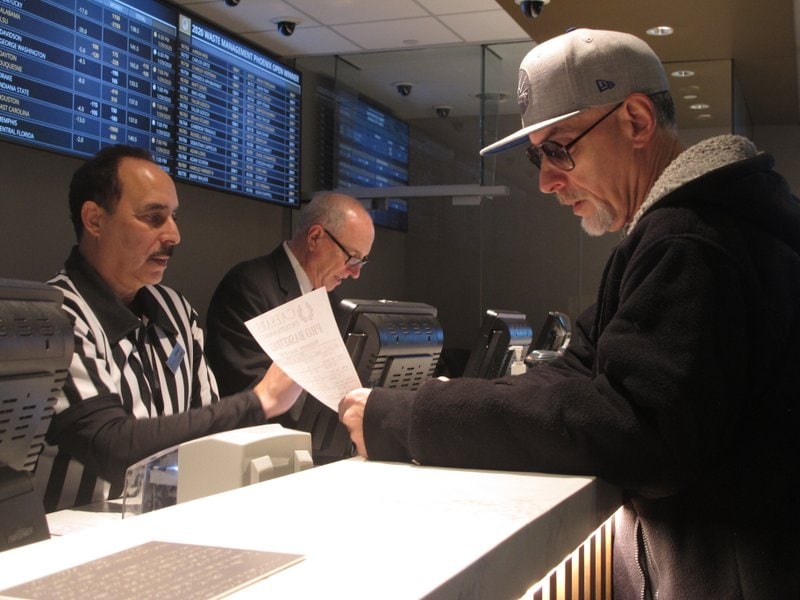 A guide to betting on the big game.

With legal sports betting continuing to spread in the U.S., this year’s Super Bowl is likely to be among the most wagered-on championship games ever.

The gambling industry’s trade association, the American Gaming Association, estimates $6.8 billion will be bet legally and illegally on the game. It says 26 million Americans plan to make a bet, up 15% from last year. And a survey by the online bookmaker DraftKings found 78% of respondents say they’re more likely to watch the whole game if they have a bet on it.

While many football fans are old hats at betting on the big game, through means legal and otherwise, the Feb. 2 game will be only the second since a U.S. Supreme Court ruling that opened the door for all 50 states to offer legal sports betting (so far, 14 offer it).

Here is a guide to betting on the big game between the Kansas City Chiefs and the San Francisco 49ers:

— The most popular bets continue to be on the point spread (the number of points by which a team must win the game in order for the bet to be a winner) and the total, also known as the over/under (the total number of points scored by both teams).

Contrary to popular belief, the point spread is not a consensus on how many points oddsmakers think one team will win by. Rather, it is a number designed to generate as close to an equal number of bets on both sides as possible. That way, the oddsmakers are guaranteed a profit through a cut of the action, called the vigorish, or “vig.” (Many books, hoping to sound less wiseguy-ish, call it “the price.”) Most sportsbooks will keep about 10% of a winning bet before paying you the rest, but they keep 100% of all losing bets. Prices on Super Bowl bets can vary significantly, so it pays to shop around to get the lowest price you can before making a bet.

If you believe the game will be a high-scoring affair, you might want to make a bet on the total, which recently was set at 54.5 points. That means if you bet the over, both teams combined must score at least 55 points for your bet to win. If it doesn’t, people who bet the under will win.

— Don’t like the odds you’re being offered? There are alternatives, but they can be costly. Many sportsbooks offer so-called teasers in which you can move the line up or down by 6, 6.5, 7 or more points on at least two combined bets.

A typical bet might be taking the 49ers, who are already getting 1 point, and teasing the spread up to 8, meaning Kansas City would now have to win by nine points. The other half of the teaser could involve lowering the total from 54.5 to 47.5, meaning both teams combined would have to score at least 48 points. The tricky part about this is BOTH bets must win in order for your teaser to be a winner. If your team covers the 8-point spread, but both teams only combine for 42 points, your bet loses.

— If this sounds like a lot to take in, there are much simpler ways to bet on the game, including some aimed at the casual fan or even someone who knows nothing at all about football. A perennial favorite is betting on the coin flip at the start of the game to determine which team can choose to get the ball first. There are only two choices: heads or tails, and it comes before the game even starts for those impatient to know whether their bet is a winner.

This is what’s called a proposition or “prop” bet. It involves betting on whether a particular event will or won’t happen during the game. They can be disarmingly simple, such as guessing which team will get the ball first, whether the first score of the game will be a touchdown or a field goal, and whether or not the game will go into overtime.

Prop bets based on a particular player’s performance are always popular during the Super Bowl. You can bet on whether Chiefs quarterback Patrick Mahomes will pass for over or under 299 yards, how many catches Chiefs tight end Travis Kelce will have, and how many receiving yards Kansas City wide receiver Tyreek Hill will gain.

On the San Francisco side, you can bet on whether quarterback Jimmy Garoppalo will throw for more or less than 247 yards, whether he’ll throw more than one touchdown pass, and whether running back Raheem Mostert will score a rushing touchdown.

The props can get involved, though. Bets include which will be longer, the longest successful field goal or the longest caught pass. And there are reams of bets comparing the performances of two players against one another. Some bets also compare player performances in the Super Bowl to the performance of basketball or hockey players in games over the weekend.

Betting on the Super Bowl is supposed to be fun, and for most people, it is. But for others, compulsive gambling is a serious problem. For help, call 800-GAMBLER.