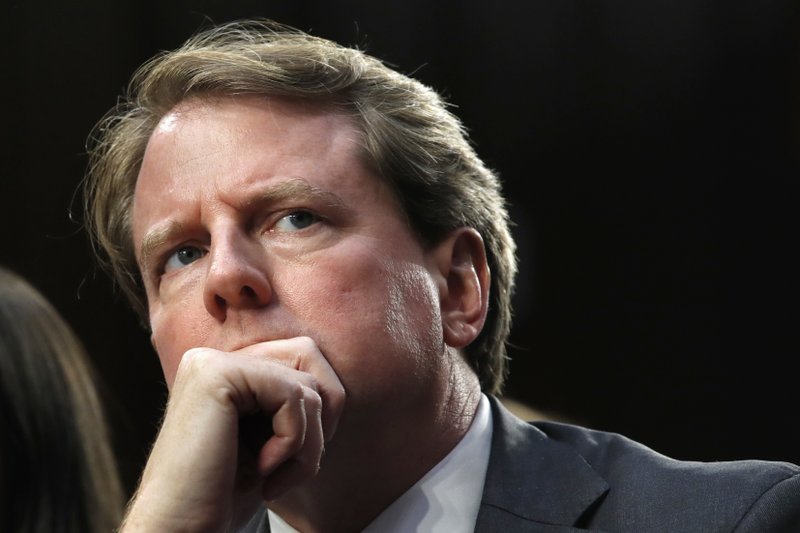 President Donald Trump thinks differently than any client he has ever had, often contradicting common wisdom and then seeing his way work out in the end, former White House counsel Don McGahn said Friday at a conference of conservative lawyers and scholars.

Others will tell the president that something is impossible. Nevertheless, the president will pursue it, “but then it works,” McGahn said at a conference of Florida chapters of The Federalist Society.

“He goes through a decision-tree faster than anyone I’ve seen, to get where he thinks the situation is going to go,” McGahn said during a question-and-answer format with Jan Crawford, CBS News’ chief legal correspondent. “He thinks differently than anyone else I’ve represented.”

He said he had participated in a new biographical documentary, “Created Equal: Clarence Thomas in His Own Words,” because his legacy had been distorted over the past three decades. During his confirmation hearing for the high court in 1991, Thomas was accused of sexual harassment by law professor Anita Hill. Thomas vehemently denied the allegations. The standard-bearer of the court’s conservative wing, Thomas has been criticized by liberal groups opposed to his views on abortion, campaign finance laws and gay rights.

The documentary wasn’t his idea, Thomas said, but rather that of his loved ones who were upset at how he has been perceived over the decades.

“They thought it would be a way to counter, at least have the truth, if people are interested,” said Thomas, the nation’s second African American Supreme Court justice. “You watch people make a gargoyle of your life. They distort. They dissemble. They mischaracterize, and they turn you into someone you don’t know. You learn to live with the discomfort of a perception that has nothing to do with you.”

Thomas was questioned during a dinner presentation by a former law clerk, Gregory Katsas, who is now a judge for the U.S. Court of Appeals for the District of Columbia Circuit. The friendly conversation covered the biographical details of the life of the justice, who is known for not saying much during Supreme Court arguments.

When asked if he felt destined to be a judge — in the trajectory of a life that started off poor in rural Georgia and passed through the Ivy Leagues to top jobs in the nation’s capital — Thomas said, “I stopped making these long-term plans.”

“If God wants me to do it, I’m called to do it,” Thomas said. “It’s not that complicated.”

McGahn joined Trump’s 2016 campaign and was named White House counsel when Trump assumed office. He played key roles in the nominations of two U.S. Supreme Court Justices, Neil Gorsuch and Brett Kavanaugh, as well as scores of other federal judges. In Trump’s administration, 187 federal judges have been confirmed to the bench in what many see as a transformation of the judiciary toward a conservative bent. Many of the judges have been suggested by The Federalist Society.

During Kavanaugh’s confirmation process, Trump never considered withdrawing the judge’s nomination when it was threatened by accusations of sexual assault from when Kavanaugh was a young man, McGahn said.

McGahn, who is now in private practice with the law firm Jones Day, lamented the hyper-partisan nature of judicial nominations. Some circuit judge confirmation hearings have the same intensity as that of a Supreme Court nomination hearing three decades ago, he said.

Asked about establishment Republicans who had initially questioned why the well-regarded attorney had joined Trump’s team, McGahn rattled off the names of the two Supreme Court nominees and the scores of other judges who have been appointed under Trump.

“The list goes on-and-on,” McGahn said. “That’s my answer to whatever genius said I can’t believe Don is standing next to Donald Trump.”