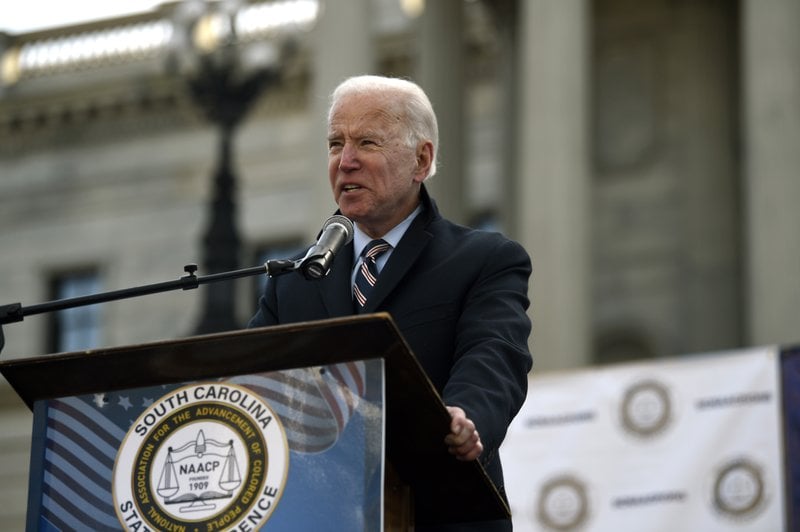 Joe Biden is facing increasingly formidable competition in South Carolina, a state his campaign has long assumed was safely in his column and one he’s repeatedly described as a “firewall” in his bid for the Democratic presidential nomination.

Vermont Sen. Bernie Sanders and billionaire activist Tom Steyer are challenging the former vice president’s standing in South Carolina. The Feb. 29 primary is the first contest in the South on the 2020 election calendar and serves as an important gauge of black support.

Sanders has generated enthusiasm from younger black voters in South Carolina. That could help him avoid a repeat of his dismal showing in the 2016 primary, when African Americans overwhelmingly backed Hillary Clinton.

Steyer, meanwhile, is flooding the South Carolina airwaves with millions of dollars in ads, building a robust staff and making numerous visits, including on Sunday and Monday, while Biden and others are in New Hampshire. The approach appears to have paid off: His support grew significantly in a Fox News poll last month, consistent with a steady momentum of endorsements that began in the final weeks of 2019. 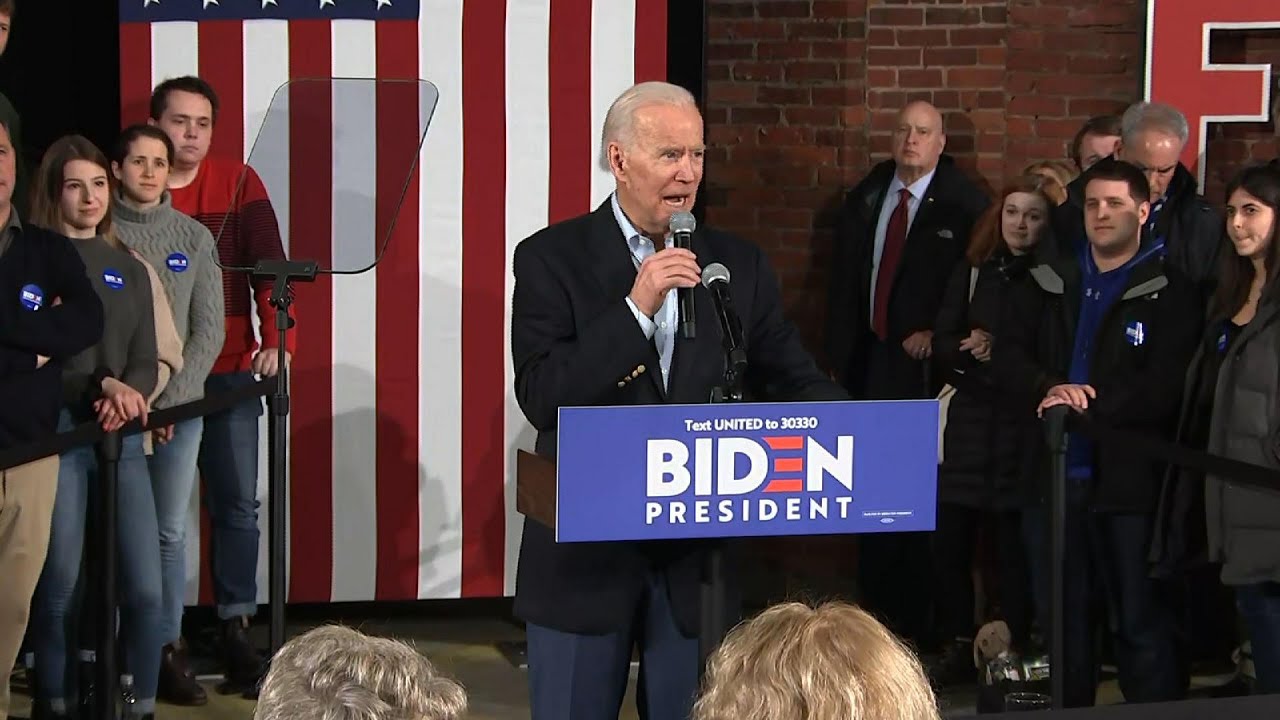 Steyer is also seizing on Biden’s fourth-place finish in last week’s Iowa caucuses to undermine Biden’s argument that he is best positioned to defeat President Donald Trump. That’s important because many black voters in South Carolina have said they would back Biden because they view him as the most electable candidate in a crowded field.

“The presumptive front-runner who was leading in the national polls by 20 or something at one point, basically had a really bad night,” Steyer told The Associated Press. “That means that his firewall in South Carolina doesn’t exist. That means that really this race is going to come down to who can build a national, diverse coalition.”

Biden was on top in a January Fox News survey of South Carolina voters and polling suggests his standing among black voters remains steady. He has compiled the most endorsements from black lawmakers and other officials, and he’s tied with Sanders for the most supporters among the state’s Legislative Black Caucus.

But with his Iowa disappointment and the middling results expected in Tuesday’s New Hampshire primary, Biden probably will need a commanding victory by the time the Democratic contest reaches South Carolina. Any shifts in voter sentiment could narrow a hoped-for win or, in a nightmare scenario, relegate him to second place, threatening the viability of his campaign.

With three weeks to go, there are warning signs.

The campaign was caught off guard in January when Dalhi Myers, a Columbia lawyer who is vice-chair of the Richland County Council, switched her support from Biden to Sanders.

“What’s best for all of us is electrifying enough people … who will go to the polls,” said Myers, who is black. “I don’t think honestly that Joe Biden can electrify the 400,000 African Americans in the state of South Carolina.”

Travis Lincoln, a 44-year-old from Charleston, attended Biden’s first rally in Columbia last May and said he was “all in” for the former vice president. But as the primary approaches, Lincoln said he has shifted his backing to tech entrepreneur Andrew Yang.

“Although I have enormous respect for Biden, I have been disappointed in his lack of empathy” on issues such as assistance for veterans or a criminal justice overhaul, Lincoln said. “I’ve grown weary of politicians. The same old formula will not defeat Trump.”

Before a Steyer town hall in Hartsville last month, 19-year-old Coker College student Alexis Schaub said she liked the activist’s focus on climate change and felt his campaign was an honest effort to appeal to South Carolinians.

“He feels genuine,” Schaub said. “I don’t want someone that I don’t really think I can trust.”

State Rep. Ivory Thigpen, a member of the Legislative Black Caucus who has endorsed Sanders, said Sanders is the only candidate who has made genuine strides to foster substantive connections within South Carolina’s black voters instead of relying on past support.

“The African American vote cannot be taken for granted,” said Thigpen. “Just the idea that we are a firewall, that our vote is already cemented. … I won’t go so far as to say it’s offensive, but I think it might be misconceived.”

“And at the end of the day, no one in this race can or should win the nomination without proving they have sweeping support from African American voters,” she said. “Vice President Biden is the only candidate who has already done so.”

Still, the emerging skepticism is frustrating for a candidate who views his ties to the black community — built over decades in the Senate, and solidified by serving as the No. 2 to the first black president, Barack Obama — as a central pillar of his candidacy.

Biden’s standing in South Carolina has long gone unquestioned, so much so that two prominent black candidates — Sens. Kamala Harris of California and Cory Booker of New Jersey — dropped out of the race in part because Biden’s strength in the state created insurmountable barriers.

The campaign is beginning to make some moves, announcing a shake-up of its senior ranks last week. Biden emphasized the importance of diversity in the Democratic Party during weekend campaign events. In an interview with ABC’s “This Week” that aired Sunday, he took particular aim at Pete Buttigieg, the former mayor of South Bend, Indiana, for failing to attract black voters.

“He hasn’t been able to unify the black community,” Biden said of Buttigieg, who essentially tied for first place in Iowa with Sanders.

Still, Biden is being outspent and sometimes outmaneuvered by rivals with deeper pockets.

While Biden was in overwhelmingly white New Hampshire on Saturday, billionaire Michael Bloomberg was courting black voters in Alabama, which is among the states that vote on Super Tuesday in early March. Bloomberg toured the late Martin Luther King Jr.’s church, spoke at a Democratic party luncheon and held a rally at Alabama State University, a historically black college and university.

Sanders has made a $5.5 million ad buy in states that include South Carolina. Steyer has hired the chair of South Carolina’s Legislative Black Caucus to serve as an adviser, a $10,000-per-month gig that drew criticism among those who found it curious that a campaign would be paying a state lawmaker while receiving his endorsement.

A challenge for Biden is that he and his campaign has spent months raising expectations for South Carolina, in part to offset losses they anticipated in states that vote earlier and are less diverse. Biden has argued that his campaign would essentially begin in South Carolina, where a win would propel him into the clutch of states that vote in March where black and Latino voters will be key.

His supporters say this strategy is still workable.

State Sen. Marlon Kimpson, a member of the Legislative Black Caucus who has endorsed Biden, said he was “a little disappointed” in Biden’s Iowa finish but was confident in a strong result in the state Biden needs the most.

“People are still fired up for Joe Biden,” said Kimpson, who on Friday said he attended an NAACP meeting where energy for Biden was high. “When I walked through the office, folks were high-fiving me, for having given my endorsement. I’ve seen no one who is despondent.”