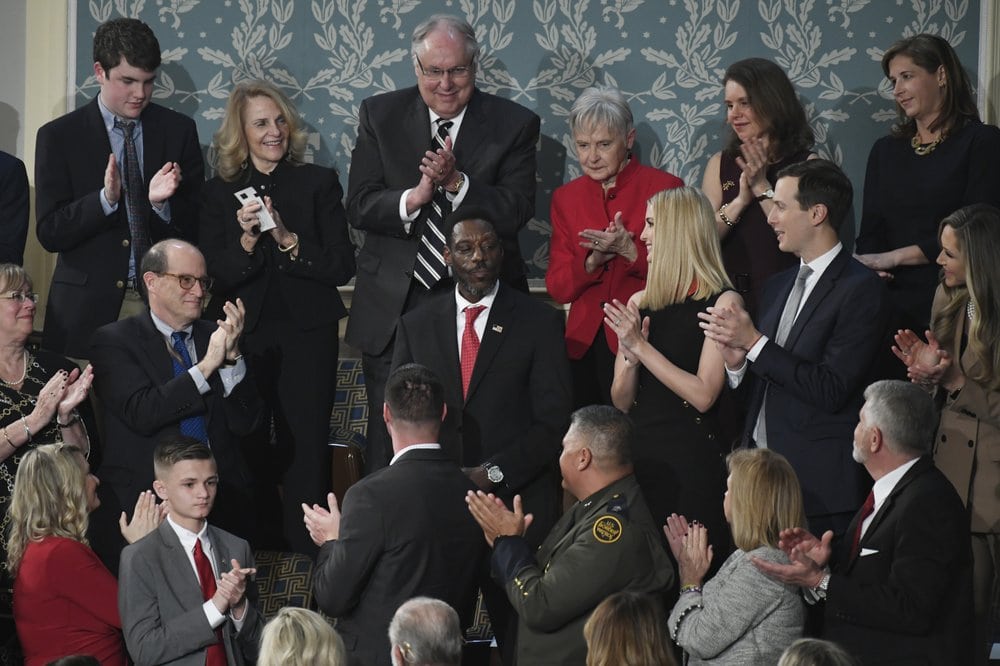 Another less than truthful claim from Trump's State of the Union.

Tony Rankins, a formerly homeless, drug-addicted Army veteran, got a standing ovation at the State of the Union after President Donald Trump described how he turned his life around thanks to a construction job at a company using the administration’s “Opportunity Zone” tax breaks targeting poor neighborhoods.

But that’s not completely true.

Rankins, who indeed moved out of his car and into an apartment since landing a job refurbishing a Nashville hotel two years ago, doesn’t work at a site taking advantage of the breaks and never has done so. In fact, he started that job four months before the Treasury Department published its final list of neighborhoods eligible for the breaks. And the hotel where he worked couldn’t benefit even now because it’s an area that didn’t make the cut.

In an interview with The Associated Press, Rankins said he always considered the job that launched him on his new life two years ago to be in an Opportunity Zone and was honored to be invited by the White House to the State of the Union, with a prime seat in the balcony next to Ivanka Trump.

“After struggling with drug addiction, Tony lost his job, his house and his family. He was homeless. But then Tony found a construction company that invests in Opportunity Zones,” the president said in his Feb. 4 speech. “He is now a top tradesman, drug-free, reunited with his family.”

Days later, Trump doubled down on the Rankins story in a speech on his economic initiatives in Charlotte, North Carolina, and invited him up to say a few words.

“First of all, I would like to thank the president for signing this bill, because without it I wouldn’t be standing here before you right now,” Rankins said.

Trump also praised Rankins’ employer, R Investments, for “working to help 200 people rise out of homelessness every year by investing in opportunity zones.”

That is also not quite true.

CEO Travis Steffens said he has hired hundreds of homeless to work at the 400 buildings the company has owned over the years, taking advantage of various tax breaks. But when it comes to Trump’s Opportunity Zone breaks, he said, the company has only one building tapping the program now, a warehouse in Cincinnati where no one seems to be working, homeless or otherwise.

“We’ve not really worked there,” Rankins said, “but we’ve stored things over there.”

Steffens suggested that when Trump said R Investments was helping 200 people rise out of homelessness he was referring to the number the company hopes to teach construction skills to at the warehouse once it has been converted to a training academy.

The White House did not immediately respond to a request for comment.

Rankins, an ex-felon and veteran who served in Afghanistan and suffers from post-traumatic stress disorder, now works at another R Investments building in Cincinnati that is in an Opportunity Zone but has not used the tax breaks. He will start working at the warehouse next month, his first job at a site using the breaks.

That hasn’t stopped the Trump administration and its allies from taking credit for Rankins’ turnaround.

Rankins “made an incredible comeback thanks to Opportunity Zone investments!” the White House tweeted. The official GOP Twitter account said the story shows “how an opportunity zone in Cincinnati has given him a second chance.” Ivanka Trump told her Twitter followers: “Through grit and perseverance, he secured a job (created in an opportunity zone) and is now thriving.”

The Opportunity Zone program passed as part of Trump’s 2017 tax overhaul offers investors big savings in capital gains taxes if they put money into nearly 8,000 poor neighborhoods designated by the Treasury Department as neglected and needing the help. Trump has touted the program in several speeches as an example of how he is helping struggling African Americans.

Critics say that too many neighborhoods getting the break were already gentrifying and that investors are likely to pour even more money into them, bypassing the poor, black communities that the program is partly intended to help. But backers note that the final rules governing the program were only released in December and say it is too early to judge.

R Investments CEO Steffens was contacted by the Trump administration after telling a fellow passenger on a plane trip about his work helping the homeless, ex-felons and unemployed veterans, according to a company spokeswoman. And he has helped a lot over the past 14 years, as many as 300 in a single year, he said, inspired by his parents’ example when he was growing up.

“My dad would give his last dollar to make sure that a mom and her kids had a meal,” Steffens said. He “taught me at young age, there’s no such thing as a self-made man.”

After the Cincinnati training academy, Steffens said he plans to open ones in the New Orleans and Miami areas, too. He said he is also close to closing a deal to buy a hotel in Charlotte in an Opportunity Zone. He said he also hopes to find land in Opportunity Zones to place hundreds of “tiny homes” that students will build as part of their training.

Steffens said he is not used to being in the national spotlight — he was invited to the State of the Union and the Charlotte speech, too — and is worried that it now can turn against him and the homeless he is trying to help.

“The publicity that this has given us is going to help us do more in the areas that we are in. And so I want to be sure that something is not painting the wrong picture, because if it that hurts us, it’s going to hurt these individuals in these areas,” he said. “We need the country to get behind what we’re doing.”

That benefit was passed in 1996 when Bill Clinton was president.

The Rankins story was one of several State of the Union introductions that appeared to be overtures to black voters, and the second to be shown to be less than truthful.

Trump dramatically announced that a Philadelphia fourth-grader, Janiyah Davis, would be getting a scholarship that would allow her to transfer from a “failing government” school to a charter school of her choice. But The Philadelphia Inquirer reported that she had already been attending a charter school for months and that students there don’t have to pay tuition.

As for Rankins, his feelings for the president haven’t changed just because he may not be the ideal Opportunity Zone hero.

“I’m not really a political person,” he said, “but yes, he would have my vote.”

previousTHC cap? Jose Oliva wants one on all forms of medical cannabis