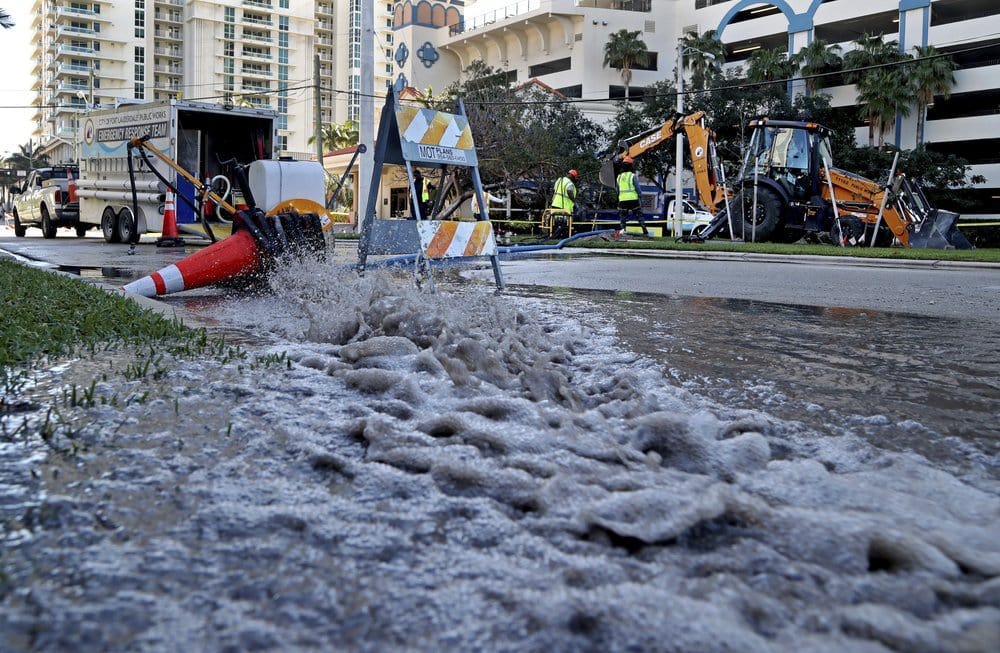 The city spilled more than 211.6 million gallons of raw sewage.

News on the city of Fort Lauderdale’s sewage spill is stirring up a lot of ire from locals and people across Florida.

According to reports, the city spilled more than 211.6 million gallons of untreated sewage on local waterways and roads. While the leak has been stopped, the impacts of the amount of sewage spilled — “enough to fill 320 Olympic-sized pools” — will be far-reaching and many are already speaking out.

Fort Lauderdale fisherman Jeff Maggio, who hasn’t been to George English Park since the sewage spill on Jan. 30, told the South Florida Sun-Sentinel, “All the fish are dead there. Everything’s just gone. Crabs, oysters, barnacles and plankton. Crews have been out there picking up hundreds of fish out of the water, so it doesn’t look like holy hell. Manatees are swimming in that poison.”

“The city of Fort Lauderdale is not alone,” said Mac Carraway, executive director of the Environmental Research and Education Foundation. “There are local governments and their utilities all over the state that are irresponsibly releasing sewage in our waterways, due to their neglect of their aging infrastructure, with seemingly no meaningful consequences.”

Floridians for Water Quality Protection, which launched in early February “to fight and advocate for Florida’s water and waterways,” cautioned against Fort Lauderdale’s fertilizer action as a “diversion” tactic, that only adds “to the chaos Florida’s patchwork of fertilizer ordinances has created.”

“Unfortunately, Fort Lauderdale has decided to divert attention away from this by blaming homeowners for fertilizing their lawns and passing a fertilizer measure to make themselves look like they are addressing the problem when they are not,” said Eric A. Brown, director of agronomy for Massey Services, a landscaping services and pest control company.

“The city of Fort Lauderdale is ignoring science by wrongly looking at its local fertilizer ordinance as the source of water quality issues,” Brown said. “It seems they would rather blame homeowner fertilizer use and maintain the ability to ‘regulate’ by turning code enforcement into the fertilizer police by giving them the ability to seize fertilizer, than actually confront its aging and decrepit infrastructure. This inaction will not do anything to fix their water quality problems and are just a distraction from the real problems at hand, septic tanks and failed sanitary and stormwater systems.”

With some estimates indicating that as much as 1 billion gallons of sewage have been released in Florida as a result of power losses since 2009, Carraway argues that a greater emphasis on the scientific research into the causes of algae blooms should be the foundation for greater uniformity in managing Florida’s water crisis.

Independent, third-party sources have acknowledged that septic tanks and failed sanitary and stormwater systems are largely responsible for nutrient loading and algae blooms.

In a GateHouse story, Jerry Phillips, a former attorney with the Florida Department of Environmental Protection, who worked on cases involving wastewater violations stated: “If you think about what’s in the wastewater, much of it contains nitrogen and phosphate — two of the driving forces behind the formation and proliferation of algae blooms. And when the nutrients meet red tide, it just explodes.”

“This action by the city will only add to the chaos Florida’s patchwork of fertilizer ordinances has created,” Carraway said.

“This not only creates a confusing situation, but they ignore science and may have a harmful effect on Florida’s environment,” said Bryan Unruh, a professor at the University of Florida, in a Florida Politics article. “Grass systems are the best bio filters known to man, which is why proper nutrition during the growing season is critically important. In fact, there is no evidence that the more restrictive ordinances are having any positive impact.”

“These local fertilizer ordinances also give Floridians the false hope that things will get better as a result of these fertilizer changes,” Carraway said. “We need the help of our lawmakers to put this chaos to an end. Florida needs the consistency and uniformity that one statewide standard on fertilizer can bring.”

Outside of the effects of the recent sewage spill, the city is dealing with an aging sewer system and lines. It was reported that the “city’s aging sewer pipes broke six times in December and spewed 126.9 million gallons of sewage — ranking as one of South Florida’s biggest spills ever. The spills fouled the Tarpon River, the Himmarshee Canal and streets in three neighborhoods: Rio Vista, Victoria Park and Coral Ridge.”

The spill, which lasted for 10 days, began on Jan. 30 when an aging sewer line that runs under the Middle River began to gush sewage.