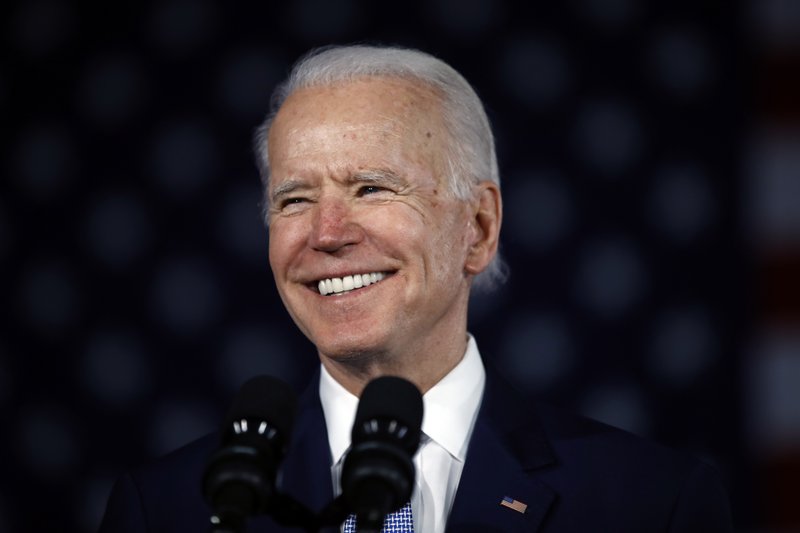 Joementum is soothing many Democrats. Image via AP/Matt Rourke.

An emboldened Joe Biden is trying to cast himself as the clear moderate alternative to progressive Bernie Sanders as the Democrats’ shrinking presidential field races toward Super Tuesday.

While other rivals appeared undeterred, Biden pressed his case during a round of national television interviews that reflected a stark reality a day after his resounding primary victory in South Carolina: The former vice president was forced to rely upon free media coverage because he was understaffed, underfunded and almost out of time as he fought to transform his sole win into a national movement.

Biden vowed to improve his campaign operation, his fundraising haul — and even his own performance — in an interview on ABC’s “This Week.” He warned of a “stark choice” between him and Sanders, while making the case he was the candidate who could win up and down the ballot and in states beyond those voting next week.

Biden added a swipe at one of Sanders’ signature lines during an appearance on “Fox New Sunday”: “The people aren’t looking for revolution. They’re looking for results.”

The newfound confidence came at a crossroads in the Democratic Party’s turbulent primary season. Sanders remained the undisputed front-runner. But the rest of the field was decidedly unsettled, even after Biden’s South Carolina blowout and Buttigieg’s sudden departure.

Most notably, New York billionaire Mike Bloomberg could create problems for Biden as the race speeds toward Super Tuesday, when 14 states from Maine to Alabama to California hold Democratic elections as the 2020 primary moves into a new phase. No longer will individual states hold primaries every week. Starting Tuesday, and most Tuesdays through early June, batches of states will vote at the same time in what has essentially become a national election.

Biden claimed a handful of new endorsements and fundraising successes on Sunday in his quest to project strength. Perhaps the most powerful endorsement would come from former President Barack Obama, who has a relationship with most of the candidates and has talked with several in recent weeks as primary voting has begun. He spoke with Biden after his South Carolina victory, but still has no plans to endorse in the primary at this point.

But a handful of high-profile political strategists with ties to the former president encouraged Biden’s rivals — including Bloomberg — to quit the race to allow anti-Sanders’ Democrats to unify behind Obama’s former vice president.

“Most of them have seen the writing on the wall for at least the last week,” said Rufus Gifford, who held top fundraising posts on both of Obama’s campaigns and was part of Biden’s fundraising operation. “It’s clear the Democratic alternative to Bernie Sanders is Joe Biden.”

Text messages reviewed by The Associated Press revealed an outpouring of interest in Biden from donors supporting other candidates, including Buttigieg and Elizabeth Warren.

Biden announced he took in $5 million immediately after his South Carolina win, by far his best single day of fundraising over the last year. But in an example of Biden’s challenge ahead, Sanders said Sunday he raised an eye-popping $46.5 million for February. That compared to $29 million for Warren and $18 million for Biden over the same period.

Sanders, who dominated the money race for much of the year even though he did not court wealthy donors, said it was not the overall fundraising haul that should impress but the enthusiasm of working people fueling his candidacy.

“No campaign out there has a stronger grassroots movement than we do,” Sanders said on CBS’s “Face the Nation.” “That’s how you beat Trump.”

Biden allies conceded that the post-South Carolina fundraising surge would have little impact on Super Tuesday.

“Super Tuesday is too close,” said former Pennsylvania Gov. Ed Rendell, a Biden supporter. “Fortunately, Joe Biden has been on the national scene for 35 years. He has less need to advertise.”

Barry Goodman, a top Biden donor in Michigan and a prominent member of the Democratic National Committee, said he’d heard from about “a dozen or so” regular party donors who had been on the sidelines and now wanted to support Biden. He said he had personally targeting at least 20 Bloomberg supporters who had been sitting on their checkbooks at Bloomberg’s request.

“If Mike had known what was going to happen last night in South Carolina, he’d never have gotten in,” Goodman said.

As he exited the race on Sunday, Buttigieg said he was acknowledging reality: “The path has narrowed to a close for our candidacy.”

Buttigieg didn’t endorse any of the remaining candidates, though he and former Biden traded voicemails on Sunday. Buttigieg has spent the past several weeks warning that nominating progressive leader Bernie Sanders to take on President Donald Trump would be risky. Biden’s other rivals showed no interest in getting out of the race. In fact, some vowed to keep fighting no matter what happened on Super Tuesday.

Warren campaign manager Roger Lau spoke brazenly of pushing into a floor battle at the Democratic National Convention this summer if no candidate emerged from the primary season with a clear majority, which was possible even if someone had a large delegate lead.

“The convention in Milwaukee is the final play,” Lau wrote in a Sunday memo.

And Bloomberg, who this week will be on the ballot for the first time, insisted that he was not going anywhere before Tuesday’s primaries.

“I’m optimistic,” he told voters in Selma, Alabama, where many of the White House hopefuls gathered for ceremonies commemorating civil rights heroism.

Yet Bloomberg received a mixed reception as he spoke from the pulpit of Selma’s Brown Chapel AME Church. Multiple parishioners stood and turned their backs to the New York billionaire neared the end of his 10-minute speech. That was after the pastor told the congregation that Bloomberg initially said he was too busy to attend because he had to “beat Donald Trump.”

Biden declined to ask rivals to bow out when given the opportunity. “It’s not for me to tell another candidate to get out of the race,” Biden said on Fox.

Through four primary contests, the AP allocated at least 58 delegates to Sanders, including two added Sunday as South Carolina’s remaining votes dribbled in. Biden vaulted past Buttigieg into second place with at least 50 delegates — shrinking Sanders’ lead from what had been 30 delegates before South Carolina to eight. Buttigieg, Warren and Sen. Amy Klobuchar remained stuck at 26, eight and seven, respectively.

But the first four states were always more about momentum more than math. Super Tuesday states offer a trove of 1,344 new delegates based on how candidates finish. California alone offers 415, which is more than double the amount of delegates allocated through Iowa, New Hampshire, Nevada and South Carolina.

As Biden and Bloomberg courted African Americans in Alabama, Sanders spent his Sunday rallying thousands of supporters in California, the crown jewel of Super Tuesday. He predicted victory there and attacked Biden’s record on foreign policy, trade and Social Security, among other issues.