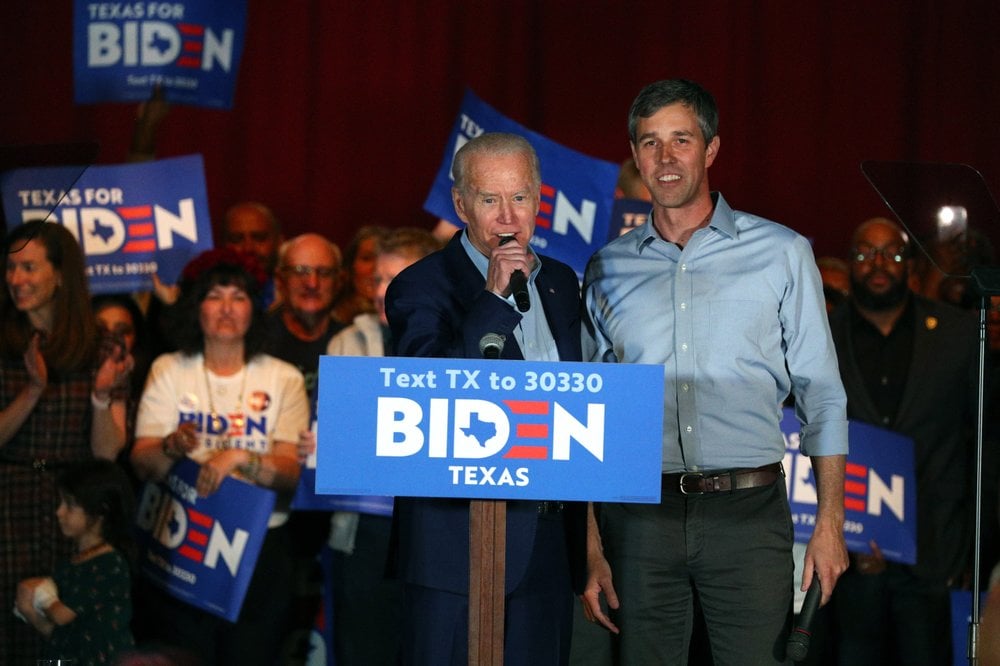 The dizzying fight for the Democratic presidential nomination reaches a critical juncture on Tuesday as millions of voters from Maine to California head to the polls. Sen. Bernie Sanders, who has energized liberals and young voters, is seeking to pull away from the rest of the field, while Joe Biden hopes to ride a wave of momentum and establish himself as the standard-bearer for the party’s moderate wing.

The Super Tuesday contests in 14 states are also the first test of billionaire Mike Bloomberg’s massive spending in the Democratic race. He skipped the first four states, banking on more than half a billion dollars in advertising and ground operations to establish him as a front-runner for the nomination.

The Democratic race has shifted dramatically over the past three days as Biden capitalized on his commanding South Carolina victory to persuade anxious establishment allies to rally behind his campaign. Amy Klobuchar and Pete Buttigieg abruptly ended their campaigns and endorsed Biden. Another former competitor, former Texas Rep. Beto O’Rourke, publicly backed Biden while a new wave of mayors, lawmakers and donors said they would support the former vice president. 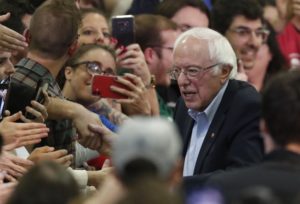 Sanders and his closest advisers pushed back against the shift of party establishment and donor class toward Biden. Campaigning in Minnesota, Sanders sought to beat back Biden’s momentum with a welcoming message to Klobuchar and Buttigieg supporters.

“To all of Amy and Pete’s millions of supporters, the door is open. Come on in,” Sanders said. “We all share the understanding that together we are going to beat Donald Trump.”

The dramatic developments came at a key crossroads in Democrats’ turbulent primary season as the party struggles to unify behind a clear message or messenger in its urgent quest to defeat the president. Yet as a field that once featured more than two dozen candidates shrinks to just five, the choice for primary voters is becoming clearer.

On one side stands Biden, a 77-year-old lifelong politician who was relishing his newfound momentum in a campaign that has struggled at times to excite voters with a message emphasizing a pragmatic approach to governing and modest change. On the other stands Sanders, a 78-year-old democratic socialist who has scored four consecutive first- or second-place finishes relying on an energized coalition drawn to his promise to transform the nation’s political and economic systems.

Yet the primary isn’t just a two-man race. 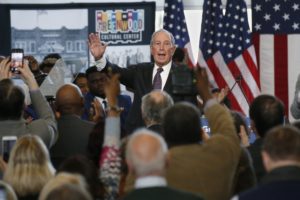 In this Sunday, Jan. 19, 2020, file photo, Democratic presidential candidate and former New York City Mayor Mike Bloomberg waves to the crowd at the conclusion of his speech at the Greenwood Cultural Center in Tulsa, Okla. Bloomberg spent heavily on advertising and nearly two dozen field staffers in Oklahoma and has made multiple campaign stops in the Sooner State. (AP Photo/Sue Ogrocki, File)

Bloomberg, in particular, could create problems for Biden’s establishment appeal. The former New York mayor, who will appear on a 2020 ballot for the first time on Tuesday, has invested an unprecedented amount in his presidential bid and wracked up many high-profile endorsements of his own.

And Massachusetts Sen. Elizabeth Warren, who has struggled for delegates and momentum over the last month, has vowed to stay in the race until the party’s national convention in July.

During an outdoor rally Monday night in East Los Angeles, Warren criticized Biden as she told supporters that nominating a “Washington insider will not meet this moment,” nor will nominating a man “who says we do not need any fundamental change in this country.”

For Biden, the wave of new support could not have come at a better time.

Just two days earlier, a loss in South Carolina would have effectively killed his candidacy. But 48 hours after a blowout victory, the former vice president stood on stage in the heart of one of Super Tuesday’s crown jewels backed by three former rivals and a growing collection of donors, activists and elected officials.

Yet some of Super Tuesday’s more valuable terrain is less forgiving.

Sanders has predicted victory in California, the day’s largest delegate prize. The state, like delegate-rich Texas, plays to his strengths given their significant factions of liberal whites, large urban areas with younger voters and strong Latino populations. Sanders also enjoys obvious advantages in his home state of Vermont, and in neighboring Massachusetts, where he’s eyeing a knockout blow against progressive rival Warren in her home state.

Bloomberg’s stock is at risk of fading as Biden gains ground. But the billionaire will still be a major factor on Tuesday.

He spent much of last week campaigning in a handful of Southern and Western states where his aides say they believe he could notch a win, largely because he’s the only candidate who’s visited multiple times and pounded the local airwaves with ads. He focused on Alabama, Arkansas, North Carolina, Virginia, Tennessee and Texas.

Bloomberg’s campaign believes he has particular appeal among suburban Democrats — those well-educated, upper middle-class voters who may be more moderate on financial issues and may be aware of his advocacy on gun control and climate change.

And Biden’s strategy for the coming days, which relies on media coverage and dispatching his new collection of surrogates, reflects a stark reality: Compared to Sanders and Bloomberg, he is understaffed, underfunded and almost out of time as he fights to transform his sole South Carolina victory into a national movement.

Biden raised $18 million in February, compared to an eye-popping $46.5 million for Sanders and $29 million for Warren.

Sanders has struggled to win over his colleagues in Congress but earned a high-profile endorsement of his own on the eve of Super Tuesday from Democracy for America, a national grassroots organization that boasts thousands of members across the county.

“The overwhelming support for Bernie we saw in our member vote should be a wake-up call to the broken, visionless, corporate Democratic establishment,” said the organization’s chair, Charles Chamberlain. “Americans want fundamental change in Washington, not a return to the status quo.”

While Tuesday’s outcome is uncertain, Biden’s team was confident that the fast-moving trajectory of the race was moving their way.

“The vice president has momentum,” said Cedric Richmond, a Louisiana congressman and Biden’s national co-chairman. “You’ll see that in the Super Tuesday states that look more like South Carolina.” And, he added in a stroke of confidence, “We’re going to win Texas.”

One complication: A significant number of votes were cast in the days and weeks leading up to Tuesday’s elections when Buttigieg, Klobuchar and Tom Steyer were still in the race.

At least 1.4 million people have already voted in California’s Democratic primary, for example, according to data collected by The Associated Press. In Texas, more than 1 million early Democratic votes have been cast. And in Virginia, nearly 28,000 people voted early, twice as many as in 2016.

Through four primary contests, the AP allocated 60 delegates to Sanders, 54 to Biden and eight to Warren.

The first four states were always more about momentum than math. Super Tuesday states offer a trove of 1,344 new delegates based on how candidates finish. Just 155 delegates have been awarded so far.