As Americans everywhere are obsessing over the new Netflix docuseries “Tiger King: Murder, Mayhem and Madness,” Hillsborough County Sheriff Chad Chronister is reviving the question: What the heck happened to Jack “Don” Lewis?

Since @netflix and #Covid19 #Quarantine has made #TigerKing all the rage, I figured it was a good time to ask for new leads. #CaroleBaskin #DonLewis #Netflix #Tiger #BigCatRescue #JoeExotic #TigerKingNetflix #HCSO pic.twitter.com/LHoJcBZVOI

Lewis’ disappeared in 1997 and his case has now become famous as Tiger King fans speculate how he went missing and whether he was actually murdered.

Lewis was married to Carole Baskin, the owner and operator of Big Cat Rescue in the Tampa Bay area. Baskin plays a major role in the Tiger King series as Joe Exotic’s nemesis.

Baskin loathed Exotic’s own big cat operation for breeding animals for captivity and then exploiting them for profit.

The series speculates on a number of theories, including the most famous, that Baskin fed her husband to tigers and other large cats.

Exotic produced a country music video in which he speculates about Baskin murdering her husband and feeding him to the tigers at their animal sanctuary. The video shows a Baskin look-alike holding a plate of meat with what looks like Lewis’s head on it while she dangles a hand in front of a lion.

The video has nearly 2.4 million views.

The series also raises other theories including that Lewis was pushed from a plane over the Gulf of Mexico or that he ran off to Costa Rica where he was rumored to have frequent sexual adventures.

Lewis, a multimillionaire, disappeared in the summer of 1997. His van was found at an airport about 40-miles from the sanctuary, but he was never found and the case has since gone cold.

Baskin claims Lewis had left early in the morning the last day he was seen to go to Costa Rica where he planned to establish a cub-breeding operation, a business venture for which Baskin disagreed.

After Lewis’ disappearance, Baskin canceled plans to begin breeding cubs and established the sanctuary merely as a place to rehabilitate large cat breeds like lions and tigers. At the time, Big Cat Rescue was operating under the name Wildlife on Easy Street.

In addition to Exotic, Lewis’ ex-wife and children suspect Baskin of foul play in Lewis’ disappearance, but law enforcement investigators have never found a reason to believe those allegations.

Lewis did frequently travel to Costa Rica, not only for business but because he had allegedly taken a mistress there. Baskin wrote in a blog post that Lewis would go to Costa Rica whenever she was menstruating. She also claimed he was loaning money to a local organized crime ring.

The series highlights just about every form of debauchery one could imagine and creates a binge-worthy narrative of a gay exotic animal breeder, his arch-nemesis trying to stop him, drugs, sex and murder. It’s particularly popular in the Tampa Bay area for its local angle.

Chronister is asking anyone with potential leads to call the Hillsborough Sheriff’s office at 813-247-8200. 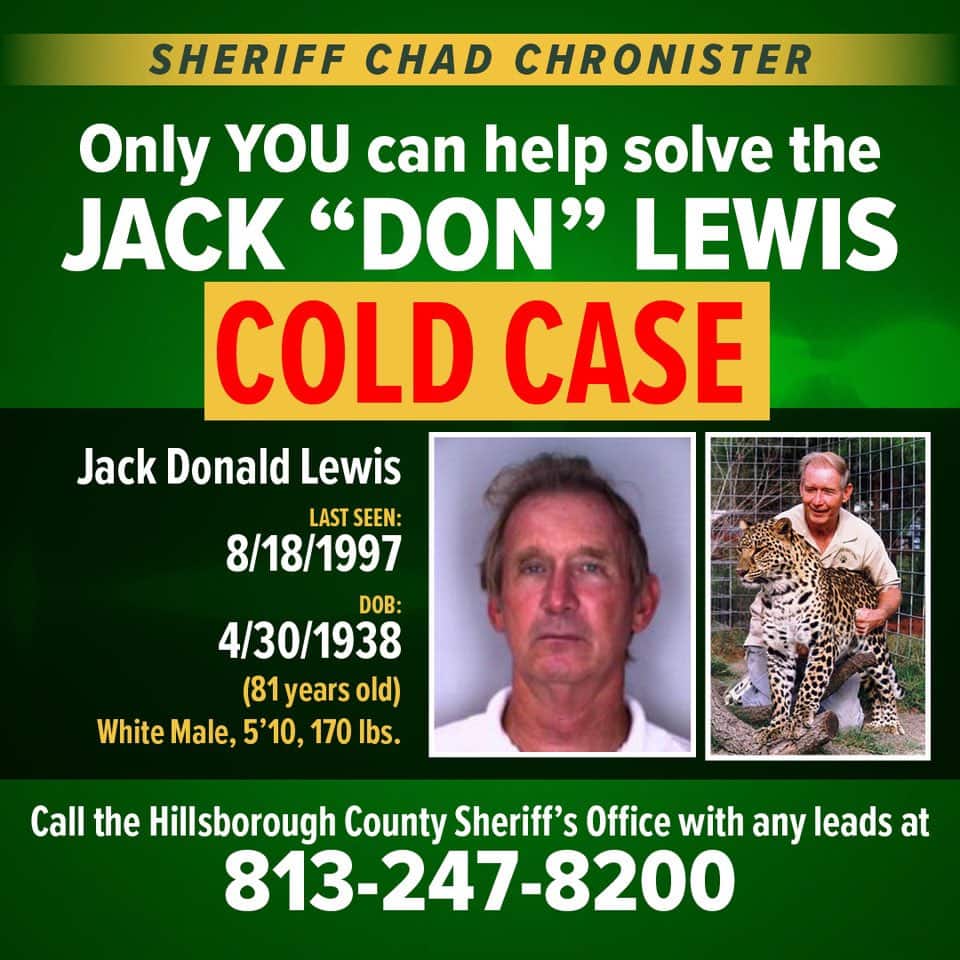 nextHow will we vote? Outbreak revives debate on mail-in ballots