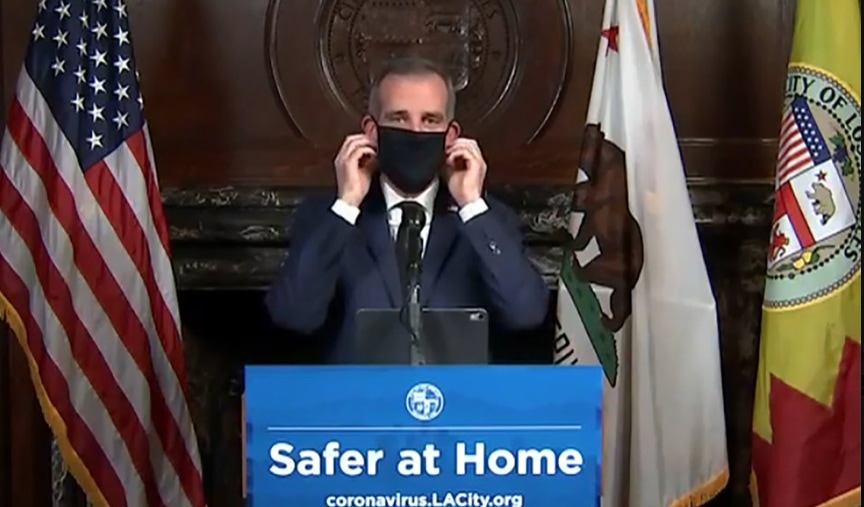 Los Angeles Mayor Garcetti displaying putting on a protective face mask during his daily news conference in Los Angeles on Wednesday, April 1, 2020. Garcetti has recommended that the city's 4 million people wear masks when going outside amid the spreading coronavirus. (Office of Mayor Eric Garcetti via AP)

The administration of President Donald Trump is formalizing new guidance to recommend that many Americans wear face coverings in an effort to slow the spread of the new coronavirus, as the president is aggressively defending his response to the public health crisis.

The recommendations, still being finalized Thursday, were expected to apply to those who live in areas hard-hit by community transmission ofthe virus that causes COVID-19. A person familiar with the White House coronavirus task force’s discussion said officials would suggest that non-medical masks, T-shirts or bandannas be used to cover the nose and mouth when outside the home — for instance, at the grocery store or pharmacy. Medical-grade masks, particularly short-in-supply N95 masks, would be reserved for those dealing directly with the sick.

The person spoke on the condition of anonymity to discuss the proposed guidance before its public release.

President Donald Trump, who was tested again for coronavirus Thursday using a new rapid test, indicated he would support such a recommendation. “If people wanted to wear them, they can,” he said.

“It’s not a bad idea, at least for a period of time,” Trump had said earlier in the week.

The White House said Trump’s latest test returned a negative result in 15 minutes and Trump was “healthy and without symptoms.”

Dr. Deborah Birx, the task force’s coordinator, told reporters the White House was concerned the mask guidance would lead to a “false sense of security” for Americans. She said new data shows the administration’s social-distancing guidelines were not being followed to the extent necessary to keep virus-related deaths to a minimum.

The discussions on face masks came as the White House moved aggressively to defend its handling of the coronavirus pandemic, particularly its efforts to speed the distribution of ventilators and protective equipment needed by medical professionals.

Trump sent a politically tinged letter to Senate Democratic leader Chuck Schumer of New York objecting to his criticism of the administration’s response. “The Federal Government is merely a back-up for state governments,” Trump wrote. “Unfortunately, your state needed far more of a back-up than most others.”

Trump said states should have done more to stockpile medical supplies before the pandemic.

The emerging guidance on masks appeared to be more limited than a Centers for Disease Control and Prevention draft of the guidance, which suggested the recommendation apply to nearly all Americans, all over the country, according to a federal official who has seen the draft but was not authorized to discuss it.

Officials were expected to limit its geographic scope to just those areas where the virus was spreading rapidly, the official said. The formal announcement was expected as soon as Friday.

Under the previous guidance, only the sick or those at high risk of complications from the respiratory illness were advised to wear masks. The new proposal was driven by research showing that some infections are being spread by people who seem to be healthy.

On Wednesday, Eric Garcetti, the mayor of Los Angeles, urged his city’s 4 million residents to wear masks when they’re in public. On Thursday, New York City Mayor Bill de Blasio followed suit in his city, the epicenter of the virus’ spread in the U.S.

In response to recent studies, the CDC on Wednesday changed how it was defining the risk of infection for Americans. It essentially says anyone may be a considered a carrier, whether they have symptoms or not.

The virus spreads mostly through droplets from coughs or sneezes, though experts stress that the germ is still not fully understood.

U.S. officials have been telling people to stay at home as much as possible and keep at least 6 feet (2 meters) away from others when they do go out. Other advice includes frequent hand washing and not touching your face.