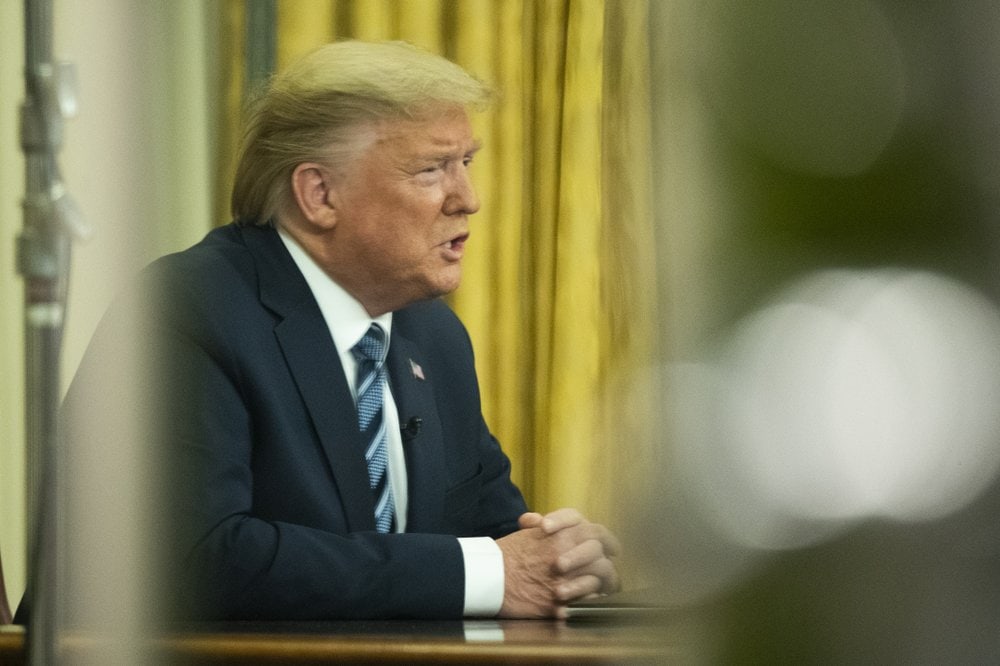 Donald Trump can't legally cancel the election. But there may be a way. Image via AP.

Campaigns across the state — and country — are being forced to adapt as social distancing measures make on-the-ground campaigning all but impossible.

While some states have delayed their primary elections, the Nov. 3 general election remains on schedule. And the Donald Trump campaign is attempting to ensure they don’t miss a step.

Vaughn said the RNC and Trump campaign made the transition to train volunteers and connect voters using online services only immediately after the President announced a partial European travel ban.

“Within 24 hours of President Trump’s announcement on March 12, our campaign transferred all of our physical ground game efforts to virtual, digitized campaigning,” Vaughn said.

“Everyone with a laptop and a smartphone can be their own Trump Victory field office. That’s all you really need to start making phone calls after being trained.”

“It has been a pretty seamless transition. And it’s because of our already-built-out infrastructure  that we were able to just easily switch from physical campaigning to virtual campaigning.”

That infrastructure included many services which were already conducted online. That includes Trump Talk — a service which allows volunteers to pull from the RNC’s voter files to contact prospective voters in Florida and throughout the country.

Those calls have been funneled to volunteers via an online system even prior to the pandemic. But the training for the system had been conducted in person.

Vaughn called the Trump Victory Leadership Initiative (TVLI) trainings the “signature training program” of the RNC and the campaign.

“Not only do they facilitate rapid volunteer growth, but they also focus on spreading the campaign and the party’s message to every community across the country,” Vaughn added.

Florida is once again a focus of the Trump machine after the President won the state in 2016 on his way to defeating Democratic candidate Hillary Clinton.

“We hadn’t left the state since 2016,” Vaughn said. “We’ve had people here on the ground and we’ve only been continuing to grow out our community and peer-to-peer infrastructure of our campaign.”

In the past two weeks alone, Trump Victory has hosted more than 236 virtual Trump Victory Leadership Initiative Trainings in Florida.

Someone from the field staff will conduct the training. Those training sessions can reach one person or dozens, depending on demand.

Volunteers have also registered more than 1.2 million calls from their own homes in the previous two weeks.

From March 13 through 19, TVLI held a National Week of Training, held TVLI trainings across country.

The group held 312 virtual TVLI trainings across the country during that span, with 1,390 people trained.

On March 21, the organization held a Virtual National Day of Action with 100% of calls coming from supporters’ homes — as opposed to campaign offices — with nearly 1.4 million phone attempts in total.

Vaughn said the campaign is also reaching out regarding voters’ health and is aiming to promote social distancing recommendations from the Centers for Disease Control and Prevention (CDC).

“This is also an opportunity for folks to engage with voters to make sure that everyone is staying safe and following CDC guidelines.”

The calls on the Virtual National Day of Action also directed voters to state and local information regarding the outbreak. If a voter did not answer, they received a prerecorded message from Lara Trump.

“I am calling to give you an important update on President Trump’s response to COVID-19, the coronavirus, and provide important information on how you can help slow the spread of the coronavirus as we all work together to keep America safe,” the message states.

“Together, we can stop the spread of coronavirus by practicing social distancing, good hygiene, and make sure to wash your hands. Please stay safe and follow the directions of your state and local authorities.”

She then directs voters to the federal government’s hub for coronavirus information.

Vaughn said the virtual campaigning will continue at least through April 30 as of now. That tracks with social distancing guidelines from the federal government, which have been extended through April.

It’s unclear whether they will restart physical campaigning as soon as the federal recommendations are lifted. Trump made large rallies a centerpiece of his campaign, but has been unable to hold such events due to the virus.

In their stead, the campaign has also hosted virtual broadcasts to try and stay connected with supporters.

Will that be enough to keep enthusiasm among Trump’s backers high enough to secure reelection? We’ll have the answer to that on Nov. 3.