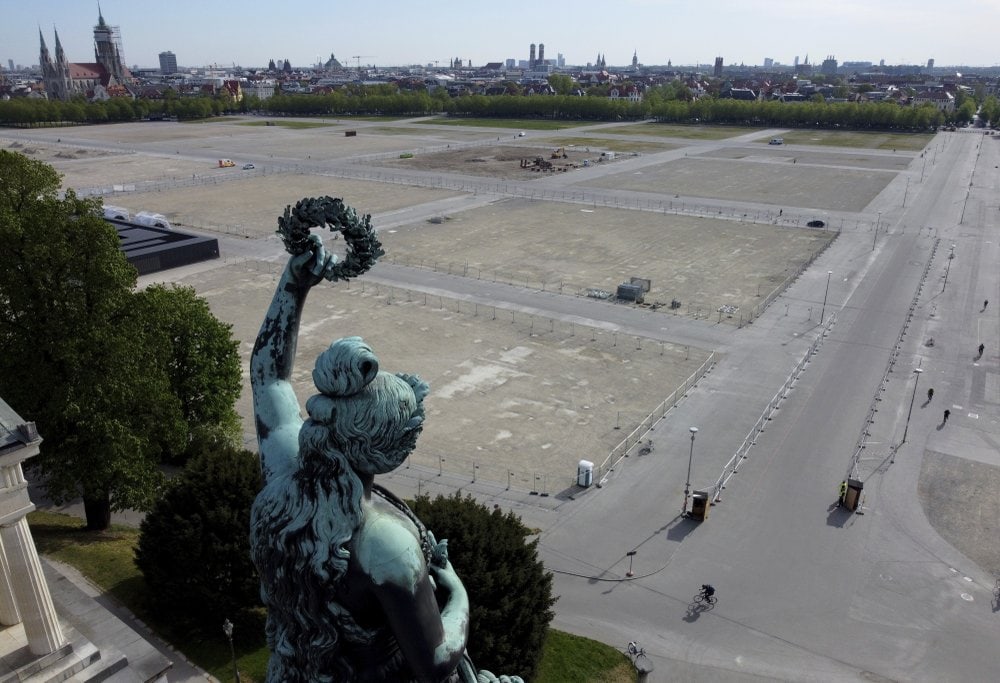 Germany called off the centuries-old Oktoberfest beer festival in Munich.

Spain called off the Running of the Bulls in July, the U.S. scrapped the national spelling bee in June and Germany canceled Oktoberfest five months away, making it clear Tuesday that the effort to beat back the coronavirus and return to normal could be a long and dispiriting process.

Amid growing impatience over the shutdowns that have thrown tens of millions out of work, European countries continued to reopen in stages, while in the U.S., one state after another — mostly ones led by Republican governors — outlined plans to gradually get back to business.

Business owners in the U.S. who got the go-ahead weighed whether to reopen, and some hesitated, in a sign that commerce won’t necessarily bounce back right away.

Mark Lebos, owner of Strong Gym in Savannah, Georgia, where Gov. Brian Kemp announced that gyms and salons can reopen this week, said it would be professional negligence to do so right now.

“We are not going to be a vector of death and suffering,” he said.

Ronique Holloway, who owns a hair salon in Smyrna, Georgia, said she will wait until late next week, and even then thinks that’s too early. She is nervous about contracting the virus from customers, though she plans to wear a mask and gloves and is looking for sanitary wipes and Lysol.

“I would have waited at least until the end of May, but I’m going back because I don’t have a choice,” she said. “I have to feed my daughter.”

With deaths and infections still rising around the world, the push to reopen has set off warnings from health authorities that the crisis that has killed well over 170,000 people globally — including more than 42,000 in the U.S. — is far from over and that relaxing the stay-at-home orders too quickly could enable the virus to come surging back.

The economic damage mounted as stocks dropped around the world and oil prices suffered an epic collapse.

A barrel of U.S. oil to be delivered in May was $5.38 in morning trading, or a little more than the cost of a fancy latte. A day earlier, the price was negative for the first time ever, with the market so glutted with oil and running out of places to store it that sellers were essentially offering to pay buyers almost $38 a barrel just to take it off their hands.

In Europe, Denmark, Austria, Spain and Germany began allowing some people back to work, including hairdressers, dentists and construction workers, and some stores were cleared to reopen or will soon get the OK.

Austrian Chancellor Sebastian Kurz said the government will be watching carefully and will “pull the emergency brake” if necessary.

Spain, among the worst-hit countries, will also begin allowing children out of their homes for brief periods next Monday. Denmark’s Tivoli Gardens, the Copenhagen amusement park that inspired Walt Disney, will reopen on May 11.

But in an indication that it will be a long time before life returns to normal, Spain canceled its Running of the Bulls in Pamplona, the more than 400-year-old event made world-famous by Ernest Hemingway’s 1926 novel “The Sun Also Rises.” It was also called off during the Spanish Civil War in the 1930s.

The Scripps National Spelling Bee in the U.S. was canceled. The competition has been held since 1925 and was last scrubbed in 1945, during World War II.

“Our hearts go out to the spellers who won’t get their final shot at winning,” said Paige Kimble, executive director.

Germany called off the centuries-old Oktoberfest beer festival in Munich, which draws about 6 million visitors each year. It was previously canceled during the two world wars; during a period of hyperinflation in Germany in 1923; and twice because of cholera outbreaks in the 1800s.

“We agreed that the risk is simply too high,” Bavarian governor Markus Soeder said.

In Italy, Premier Giuseppe Conte confirmed that businesses can start reopening on May 4 but dashed any hopes of a full end to the country’s strict lockdown any time soon, saying: ”A decision of that kind would be irresponsible.”

In the U.S., some states, including Tennessee, West Virginia and Colorado, announced plans to begin reopening in stages in the coming days. Sunbathers quickly flocked to the sand after some South Carolina beaches reopened with the governor’s backing.

Some sheriffs in Washington state, Michigan and Wisconsin said they won’t enforce stay-at-home orders. Angry protesters demanding the lifting of restrictions marched in North Carolina and Missouri with signs like “Enough is enough.” And Wisconsin Republicans asked the state’s high court to block an extension of the stay-at-home order there.

Governors and local leaders from other states said that before they can move ahead, they need help from Washington in ramping up testing to help keep the virus in check.

“If some of these reopenings are done the wrong way, it’s going to affect all of us,” New York Mayor Bill de Blasio said on CNN.

nextBack to work? Companies finding it easier said than done