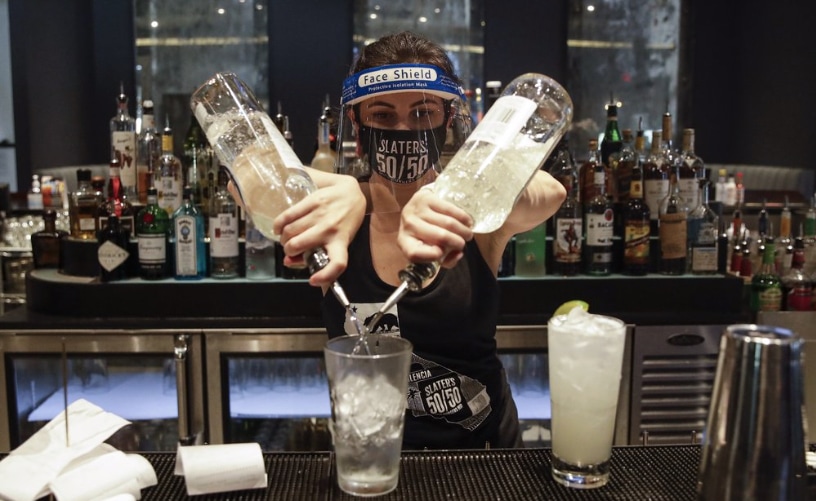 As the coronavirus swept California with renewed ferocity, the governor once again closed bars, inside dining and, for much of the state, gyms, indoor church services and hair and nail salons in an effort to prevent COVID-19 cases from swamping hospitals.

Gov. Gavin Newsom issued a sweeping set of closures on Monday as the state recorded more than 329,000 cases and deaths topped 7,000. Hospitalizations have surged by 28% in the past two weeks, including a 20% increase in patients requiring intensive care.

That was lower than a 50% hike seen about a week ago but Newsom said he was concerned about the future and implored people to maintain social distance, wear masks in public and stay home when possible.

“COVID-19 is not going away anytime soon, until there is a vaccine and or an effective therapy,” Newsom said.

Meanwhile, the Los Angeles and San Diego school districts, the two largest in California with a combined K-12 student population of about 720,000, announced Monday they won’t bring students back to classrooms next month because of rising coronavirus hospitalizations and infection rates.

Earlier in the pandemic California closed beaches, campgrounds and state parks as it sought to limit interactions of people from different households. But as data showed the virus was most likely to be transmitted indoors, the Newsom administration began modifying public health orders, including ordering people to wear face coverings and leaving outdoor activities alone.

Shutdowns went even further in some of the 30 counties on a state watch list because of worrying rises in disease transmission, especially from people mingling without heeding safety guidelines. The listed counties account for roughly 80% of California’s population.

Those that have been on the list for three days now must restrict indoor operations for hair and nail salons, tattoo parlors, gyms, shopping malls and houses of worship.

The affected counties include Los Angeles and virtually all of Southern California.

In Los Angeles, Mayor Eric Garcetti immediately implemented the shutdowns and warned that the city was “on the verge” of raising its COVID-19 threat level from orange to red — the highest level — and resorting to shutting down all but essential businesses.

Garcetti supported Newsom’s orders but they met with resistance from some churches and fear by small businesses that were struggling to survive after months of being shut down.

Salons will be hard-hit because loans and unemployment insurance will soon run out and many may ignore the order, said Fred Jones, attorney for the Professional Beauty Federation of California.

“We’re going to be out there on our own, worse now than ever,” Jones said. “We question how many of those salons that just reopened will comply with this second round of closures.”

There is “no evidence that a single contagion has been spread in a salon since we’ve been allowed to reopen,” Jones said.

“How long am I going to do this?” she told the Orange County Register. “I’m 59, and it’s not like I can find a job somewhere. I’ve been a barber for 30-plus years, so I don’t know … It’s a pretty frightening outlook.”

Since the order only bars indoor activities, she was considering other options, such as putting up a canopy to cut hair outside.

Some churches that had cautiously begun holding limited indoor services a month ago were faced with ending them again.

Sacred Heart Catholic Church in Palm Desert, near Palm Springs, had been allowing only 100 people or fewer into services to maintain social distancing.

The Rev. Howard Lincoln told the Palm Springs Desert Sun that he wasn’t surprised by the new order.

“Our right to worship has to be tempered with our clear, moral responsibility to protect others from a highly contagious and sometimes fatal disease,” Lincoln said. “As a church, we preach, ‘Love thy neighbor.’ It is certainly not too much of a sacrifice to wear a mask and socially distance and try to protect others.”

Newsom’s ban on indoor church services may be unconstitutional, argued Robert Tyler of a nonprofit law group called Advocates for Faith and Freedom, although several judges have upheld earlier restrictions.

“Is a worship service any less protected under the First Amendment than a protest? No,” Tyler said in a statement. “The freedom of worship is of paramount importance and we will support churches who provide services as their faith sincerely dictates so long as they do not provide their services recklessly.”

Newsom’s closure announcements did include a note of hope. The governor said the state had managed to flatten the curve of COVID-19 infections in the wake of mid-March orders that shut down most businesses and kept many people at home.

“We were able to suppress the spread of this virus, we were able to knock down the growth of this in the beginning,” Newsom said. “We are going to do that again, there is no doubt in my mind.”