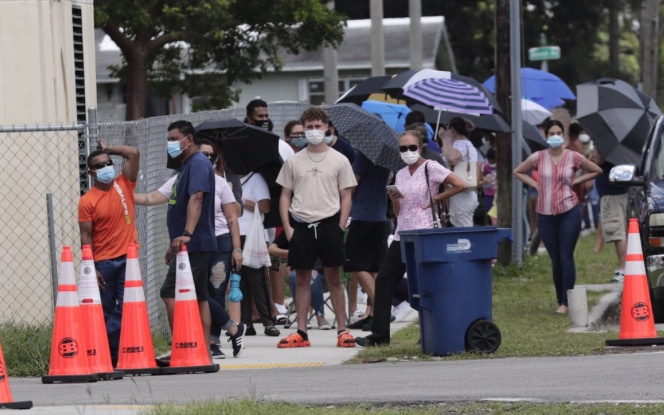 Miami-Dade County plans to start aggressively enforcing rules designed to combat the rapidly spreading coronavirus as Florida reported more than 11,000 new cases Friday adding to a caseload that is straining the state’s hospitals.

The Miami-Dade County Commission unanimously approved an emergency order Thursday that gives all code and fire inspectors authority to issue tickets of up to $100 for individuals and $500 for businesses not complying with guidelines to wear masks and practice social distancing. Police officers have already had this enforcement power.

“We’re going to put a heck of a lot of people out there,” Mayor Carlos Gimenez told commissioners during a Zoom meeting. “Our people are going to go everywhere.”

Gimenez noted that because people, and especially younger people, have not been following the “new normal” guidelines, the county needed another enforcement tool.

Meanwhile, in neighboring Broward County, officials announced a curfew beginning Friday that bars most people from being outside from 11 p.m. to 5 a.m. at least through Aug. 1. There are exceptions for such things people going to work, walking pets, the news media and people seeking medical care.

Broward County also issued an order limiting private gatherings, indoor or outdoor, to no more than 10 people. Broward is seeing about 1,300 new cases on average every day and a positive coronavirus test rate of more than 16%, according to the county.

Hospitalizations for the coronavirus, which have tapped out intensive care units of some hospitals around the state, continued to rise though not quite as steeply as in many of the days of the past week. As of late morning Friday, there were 8,886 hospitalizations compared with 8,809 at the same time Thursday. Hospitals in the Miami, Tampa, Orlando and Jacksonville areas have seen surges in recent days.

Florida Gov. Ron DeSantis, an ally of President Donald Trump, downplayed the fact that Florida has become a hotbed for the virus, saying other regions from Southern California to South Carolina have seen similar increases.

“The fact that we’re testing so much has led to case numbers that have been put out there that I think kind of unfairly are maligning the state … If some of those states like New York and New Jersey were testing 100,000 a day at their height, they would have had 40,000 or 50,000 cases a day, so I think it’s important to put that in perspective,” the governor said.

In Miami-Dade County, which is Florida’s most populous and the current epicenter of the outbreak, there were more than 2,442 coronavirus cases Friday, according to Florida’s Department of Health. The county now has 77,867 confirmed cases.

The order took place immediately upon approval. Gimenez said it’s time for repercussions for people who choose to disobey the rules, the Miami Herald reported.

“This is an all-hands-on-deck approach. We need to have not just police officers, but all inspectors — our code inspectors, our fire inspectors — on deck to enforce the rules we know people are not complying with,” Gimenez said.

Violators who receive the civil fines can avoid financial hardship by serving community service hours through the county’s Diversion Program.

Shaun Alley, the assistant manager of Blue Collar, a Miami restaurant that serves comforting, diner-like food, said that all of the customers eat outside on picnic tables.

Everyone in the small restaurant wears masks and is vigilant about telling the customers to wear them when not eating, too. They don’t want to be fined — or to expose themselves to the coronavirus.

“Nobody wants to get a citation for nothing. We tell people flat out. Either you comply or we have the right not to serve you,” he said. “We haven’t had any issues so far. This is everywhere so people should understand.”

Alley said he doesn’t know anyone personally who has gotten the coronavirus, but he’s being careful because he has a newborn and a wife.

The goal of the ordinance is to “increase the manpower desperately needed to follow up on these executive orders,” so that people listen without having to be arrested, said Commissioner Sally Heyman.