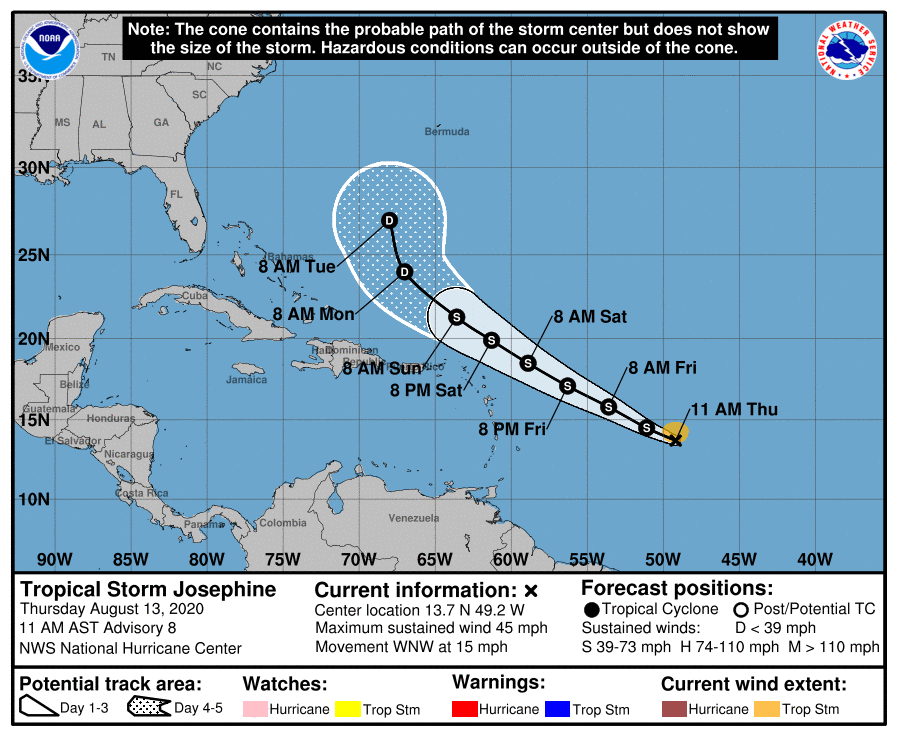 As of the latest NHC report, the tropical storm is roughly 975 miles east-southeast of the Northern Leeward Islands and traveling west-northwest at 15 mph. The storm’s current path projection is well east of the Sunshine State. It is projected, however to turn toward the norwest late this weeked or early next week.

Josephine is producing maximum sustained winds of 45 mph with higher gusts and tropical storm force winds extending nearly 80 miles to the north of the storm’s center. The NHC anticipates some additional strengthening within the next 48 hours.

While forecasters have encouraged the Leeward Islands to monitor the storm’s progees, no advisories, coastal watches or warnings are in effect. Current path projections from the South Florida Water Management District suggest Florida will no be impacted.

Tropical Storm Josephine comes as the most recent storm since the National Oceanic and Atmospheric Administration upgraded the 2020 Atlantic Hurricane season outlook from “above-normal” to “extremely active.”

The updated outlook forecasts 19 to 25 named storms this season, seven to 11 of which would likely become hurricanes. The outlook also calls for three to six of those storms to develop into major hurricanes before November.

Thus far, the 2020 Atlantic hurricane season has seen nine named storms. Typically, however, only two named storms form by early August and a ninth named storm would not develop until October.

The new strategy includes temperature screenings, PPE kits and non-congregate sheltering alternatives for those with COVID-19 or experiencing COVID-19 like symptoms.