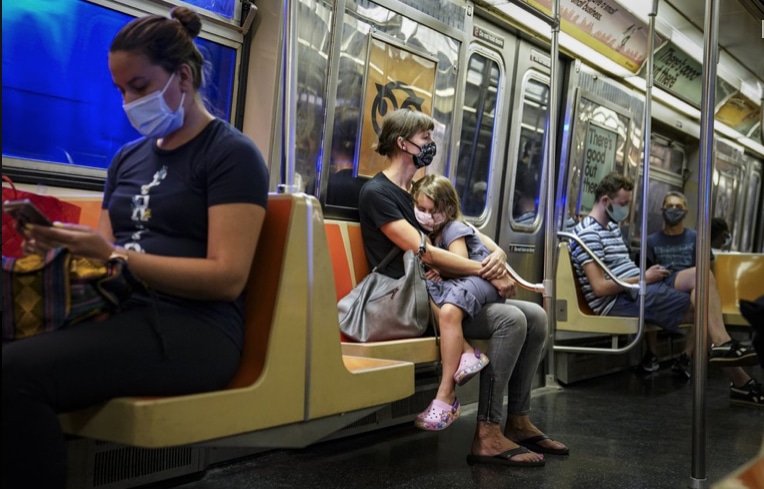 The number of Americans newly diagnosed with the coronavirus is falling — a development experts say most likely reflects more mask-wearing but also insufficient testing — even as the disease continues to claim nearly 1,000 lives in the U.S. each day.

About 43,000 new cases are being reported daily across the country, down 21% from early August, according to data compiled by Johns Hopkins University. While the U.S., India and Brazil still have the highest numbers of new cases in the world, the downward trend is encouraging.

“It’s profoundly hopeful news,” said Dr. Monica Gandhi, an infectious-diseases expert at the University of California, San Francisco, who credits the American public’s growing understanding of how the virus spreads, more mask-wearing and, possibly, an increasing level of immunity.

“Hopefully all those factors are coming into play to get this virus under control in this country that’s really been battered by the pandemic,” she said.

But insufficient testing is probably concealing the full extent of the crisis, said Dr. Jonathan Quick, who leads the pandemic response for the Rockefeller Foundation, which has recommended the U.S. test 4 million people a day by fall.

“We’re grossly under-testing in some of the places that are still having high caseloads,” Quick said, singling out Mississippi, Texas, Georgia and North Dakota as hot spots with high rates of positive test results.

Even at 43,000 new cases per day, the U.S. remains far above the numbers seen during the spring, when new daily cases peaked at about 34,000, he said.

“It’s a good trend, but nowhere near what we need to be,” Quick said of the decline.

Jeffrey Shaman, a public health expert at Columbia University, said he is skeptical enough people are immune to significantly slow the spread. But he agreed that changes in Americans’ behavior could well be making a difference, recalling the impact that people’s actions had in containing Ebola in West Africa several years ago.

“Ebola stopped for reasons we didn’t anticipate at the time. It was so horrifying that people stopped touching each other,” Shaman said. Something similar may be happening with the coronavirus, he said.

“I know I don’t have nearly the number of contacts that I used to,” Shaman said. “But if we relax that, if we get complacent, will we just see another outbreak?”

The decline in newly reported cases in the U.S. comes even as deaths from the virus remain alarmingly high. Over the past two weeks, officials have reported an average of 965 deaths a day from COVID-19, down from 1,051 a day in early August.

Deaths from the coronavirus are a lagging indicator — they trail new infections because of the time it takes for people to get sick and succumb to the disease.

The percentage of tests coming back positive for the disease has also declined over the past two weeks, from 7.3% to 6.1%. But that comes as the total number of tests administered has fallen from its August peak of more than 820,000 a day, leveling off in recent weeks at about 690,000 a day.

The situation has improved dramatically in several states that struggled with high caseloads earlier this summer.

In Arizona, for example, officials reported 859 new cases Tuesday, down from a peak of 5,500 in late June. More than 2,000 people arrived at the state’s hospitals showing symptoms of the virus on a single day in early July. This week, that number has been less than 1,000.

Malinda Coler, 37, of San Francisco, said she has been diligent about mask wearing and other preventive measures, less to protect herself than a best friend who has a compromised immune system, with severe arthritis psoriasis.

“So I wear a damned mask and get infuriated when others don’t,” she said.

Most states now have some type of mask requirement, either through statewide orders issued by governors or from city and county rules that cover most of their population.

Even some conservative governors have gone along with masks. Mississippi Gov. Tate Reeves mandated masks in all public places earlier this month, and Georgia Gov. Brian Kemp dropped a lawsuit against Atlanta in a dispute over a requirement by the state’s largest city.

In Leeds, Alabama, Will Heath said he has seen greater adherence to mask rules around town, whether in stores or at his 5-year-old daughter’s cheerleading practice.

He and his wife, a nurse, have worn masks all along but said the attitude among others has shifted from “Even if I get it, I’ll be OK,” to “Let’s make sure we don’t give it to somebody else.”

“We have all been sort of operating under the assumption that we all have it or we’re going to get it eventually. So we want to make sure we don’t spread it,” Heath said.

Many places around the U.S. are seeing pockets of contagion, especially in college towns where students are holding parties and crowding into bars. The mayor of Tuscaloosa shut down bars for two weeks after University of Alabama officials reported an “unacceptable” rise in COVID-19 cases that could derail plans to continue the semester on campus.

The school is still moving ahead with fall sports in the football-crazed state, with plans to allow only about 20,000 fans at its 101,000-capacity stadium and a ban on tailgating. Coach Nick Saban weighed in on the virus Monday, urging people to wear masks.

“It’s not just about football. So, for people to make the right choices and decisions to wear their masks, do the things when they’re out publicly, respect the rules, respect the virus, that’s important,” he said.

It’s not clear what will happen to case numbers as more school districts bring students back to classrooms and colleges reopen their campuses. In recent weeks, schools including the University of North Carolina, Michigan State and Notre Dame have moved instruction online after outbreaks on their campuses.

Officials at the University of Tennessee at Knoxville said four students are facing disciplinary proceedings after three hosted off-campus parties with no mask or other distancing and another left isolation to meet with others despite testing positive for the virus.

“If the facts reported to the university are accurate, these students will face at least suspension from the university, and potentially greater penalties,” Chancellor Donde Plowman wrote.