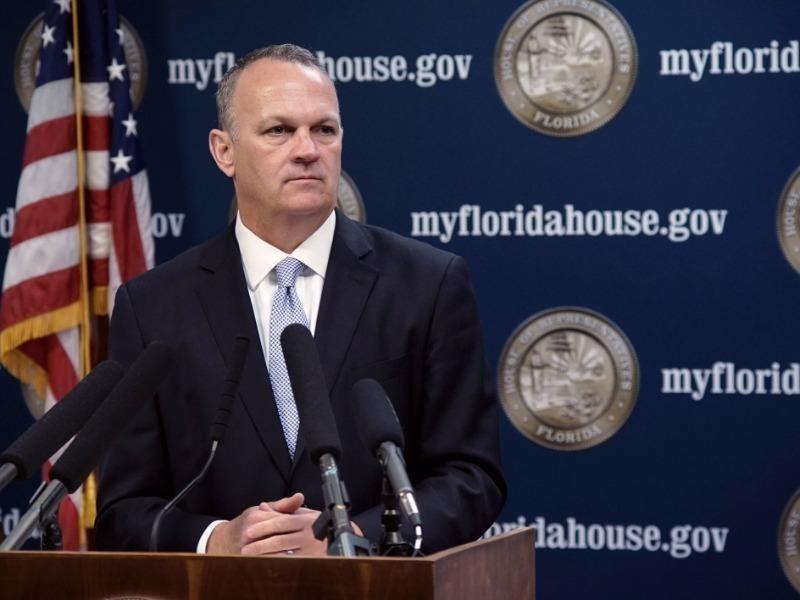 Image via The News Service of Florida.

Florida officials have committed to spending more than half a million dollars on private lawyers to defend a mandate that schools reopen brick-and-mortar classrooms amid the coronavirus pandemic, according to contracts provided by the Department of Education.

The legal costs were made public as an appellate court signaled Monday that it intends to side with the state in lawsuits filed by teachers unions challenging a July 6 emergency order issued by Education Commissioner Richard Corcoran. The mandate required schools to reopen classrooms five days a week in August or risk losing state funding.

The Florida Education Association and the Orange County teachers’ union have alleged that Corcoran’s order violated the Florida Constitution’s guarantee to “safe” and “secure” public schools.

The Department of Education signed a $225,000 contract with the Gunster law firm on July 23 to represent Corcoran, Gov. Ron DeSantis and state education officials who are defendants in the litigation.

The state doubled the Gunster deal on Aug. 17, bringing the contract to $550,000, records show. Under the agreement, the Gunster lawyers’ hourly rate is $450.

Last week, the education department also hired Rocco Testani and other lawyers with the firm Eversheds Sutherland to represent the state in the lawsuits.

Education officials signed a $75,000 contract with Eversheds in June to represent the state in a separate lawsuit filed by college students seeking tuition reimbursements or adjustments after campuses were shuttered statewide in March in an effort to minimize the spread of COVID-19.

On Aug. 25, the Eversheds agreement increased to $315,000 after it was amended to include Testani and other attorneys to represent the state in the teachers’ unions’ lawsuits. The Eversheds lawyers will be paid $495 per hour, according to the contracts. The Atlanta-based Testani has represented the department on other high-profile constitutional issues in recent years.

“It’s entirely up to the FEA (the Florida Education Association) to end their frivolous lawsuit if they would like to save taxpayers from these expenses,” Department of Education spokeswoman Taryn Fenske said in an email on Monday.

In court rulings last week, Leon County Circuit Judge Charles Dodson twice sided with the unions, finding that the statewide mandate was unconstitutional. But the Tallahassee-based 1st District Court of Appeal late Friday put a stay on a preliminary injunction issued by Dodson.

In an order released Monday about the stay, a three-judge panel of the appeals court signaled it is poised to deliver a legal victory to DeSantis and Corcoran, saying that “nothing in the emergency order (from Corcoran) requires any teacher or any student to return for in-person instruction at a brick-and-mortar school.”

DeSantis and Corcoran have steadfastly maintained that families need to be able to choose whether their children should return to in-person instruction or continue learning remotely, a process that began statewide when K-12 public schools and colleges closed in March as the coronavirus began spreading throughout Florida.

The legal wrangling comes as classrooms in nearly all counties had reopened Monday.

In the temporary injunction issued on Aug. 24, Dodson ruled that decisions about whether schools should resume in-person classes amid the pandemic should be left to local education officials, who should be allowed to open schools when they deem it is safe without being financially penalized.

The state quickly appealed Dodson’s ruling, which triggered an automatic stay. But Dodson on Thursday sided with a request from the teachers’ unions and lifted the stay.

Hours after Dodson’s Thursday decision, lawyers for DeSantis and Corcoran asked the 1st District Court of Appeal to reinstate the stay. On Friday, the appellate court granted the state’s request, and the three-judge panel elaborated on the decision in an 11-page order Monday.

Florida law bases district funding on surveys of the number of children in schools. Schools receive reduced funding for virtual education and are paid only for online classes that are completed.

Dodson “abused” his discretion in three respects when the judge vacated the automatic stay on his order, Rowe continued.

“First, no compelling circumstances warranted vacating the stay. Second, based on our preliminary review, the state has a substantial likelihood of succeeding on the merits in this appeal. And third, appellees (the unions) failed to show that reinstatement of the automatic stay would cause irreparable harm,” Rowe wrote.

“The injunction caused confusion and uncertainty for students, parents, and teachers,” Rowe wrote in Monday’s order.

The panel also brushed aside Dodson’s finding that “teachers are resigning or retiring due to the risk of exposure to COVID-19,” as testimony during a two-day hearing in mid-August showed.

Despite assurances from Corcoran and DeSantis that teachers should be allowed to opt out of returning to the classroom because of COVID-19, some local officials have refused to accommodate educators whose lives could be at risk if they are exposed to the virus, testimony revealed.

But Rowe noted that staffing decisions are in the hands of local — not state — officials.

About 1.6 million of the state’s 2.8 million schoolchildren have signed up for in-person instruction, according to Jacob Oliva, chancellor of the state’s K-12 public school system.

The Florida Education Association intends to “press ahead in the appellate court,” union Vice President Andrew Spar said in a prepared statement Monday.

“The reopening order is still unconstitutional, and local districts still should be allowed to make the best and safest decisions for everyone in their schools,” Spar said, noting that coronavirus outbreaks at schools are occurring throughout the state.

But, appearing at an education event with DeSantis in Tallahassee on Monday, Corcoran hailed the appellate court’s decision.

“It was an absolute rebuke of the trial court trying to take away that right from parents and students. So, I think we are going in a great direction. Today is the first day we can literally say we are fully open,” the education commissioner said.