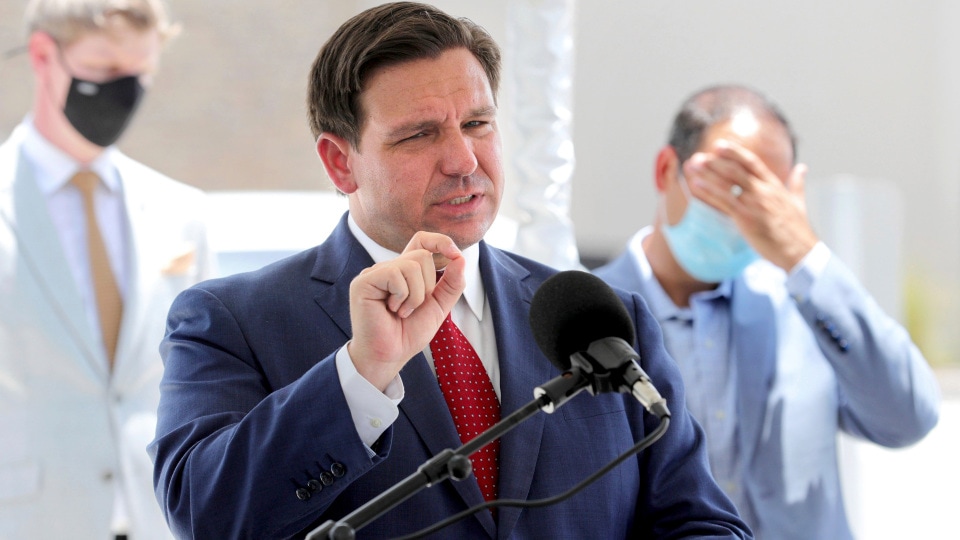 Gov. Ron DeSantis wants health officials to revisit how it presents its findings.

Gov. Ron DeSantis is looking for better ways to present the state’s COVID-19 data after the release of 75,000 test results from one company this week.

That data dump Monday caused the Governor and the Department of Health (DOH) and Division of Emergency Management (DEM) to sever testing ties with Quest Diagnostics, one of the largest private testers in the state. Speaking to reporters Thursday, he floated the possibility of noting the certainty of diagnoses and reporting how many school-aged people that test positive show symptoms.

“There so many different things that this Quest issue is peeling back the surface of,” DeSantis said.

In recent weeks, the Governor has tried shifting the focus to hospital metrics rather than testing positivity rates even though both have swung significantly for the better. Earlier this year, he similarly told people to consider positivity rates over the raw count of new cases.

The date a positive case is discovered necessarily comes after an infection. And while positive cases rely on a quick turnaround from mostly private labs, hospitals count admissions for symptoms related to COVID-19 each day.

But this week, DeSantis said diagnoses don’t necessarily mean someone currently has a contagious case. They might not have any live viruses at all.

“It cannot tell us whether there’s an active infection,” he said Thursday. “Now if somebody is visibly sick or whatever, you infer 99% of the time that’s going to be an active infection. But a lot of these people testing positive have little or no symptoms.”

He said labs should provide more context to how they test samples, including the Ct value, which determines how sensitive the test is to virus strands. When Ct values are over 24, infectiousness decreases dramatically, according to a study Oxford scientists penned.

Among school-aged Floridians, a recent contentious topic after DOH pulled a draft report from its website and decreased the frequency of its pediatric report, DeSantis said the state should indicate how many people were symptomatic.

“The University of Alabama, they carpet-bombed the whole undergraduate population with tests, like 60,000,” he said. “They had 3,000 or something positives, and people were making headlines.”

“They have yet to have one person get admitted to the hospital out of the 3,000, so how many of those even had symptoms?”

And the state’s daily reports should highlight when infections occurred, or when the samples were taken, rather than when results were returned, the Governor added. Beginning Tuesday, DOH and DEM included a daily breakdown of the Quest data from Monday.

The data dump made up half the next day’s report’s positive findings but dated back to late April.

Following a data dump last month by Niznik Lab Corp, which DeSantis said was a new player in the COVID-19 testing market, the Governor told reporters he asked DOH to make consequences for labs that end up skewing data. Quest was a frequent offender in delivering late results, partly the reason for the quick cut.

“This was, starting in April, they were putting, dumping it in a file,” DeSantis said Thursday. “It grew, it grew it grew, and then all of a sudden you do it.”

Because local officials use local data to determine their reopening or closure plans, he said there needs to be accountability regarding state data. That includes labs that announce only the positive results instead of adding negatives and inconclusive results.

As with other diseases having a lower threat of infection, the state only reports positive cases.

“We have labs that will do 50 positives and not put any negatives in,” DeSantis said. “If the school system in Hillsborough is using that and you have 500 negatives that you’re not putting and they’re going to say, ‘Well, the percent positive is a little too high to have in-person,’ that is actually affecting people’s lives.”

“We have been having issues since day one on testing and testing results,” Fried said on C-SPAN’s Washington Journal.

“It’s just showing that this is something we should have been on top of at the Department of Health. This is a contract that they initiated, and because of a lack of leadership and oversight, they didn’t understand what was going on in the state.