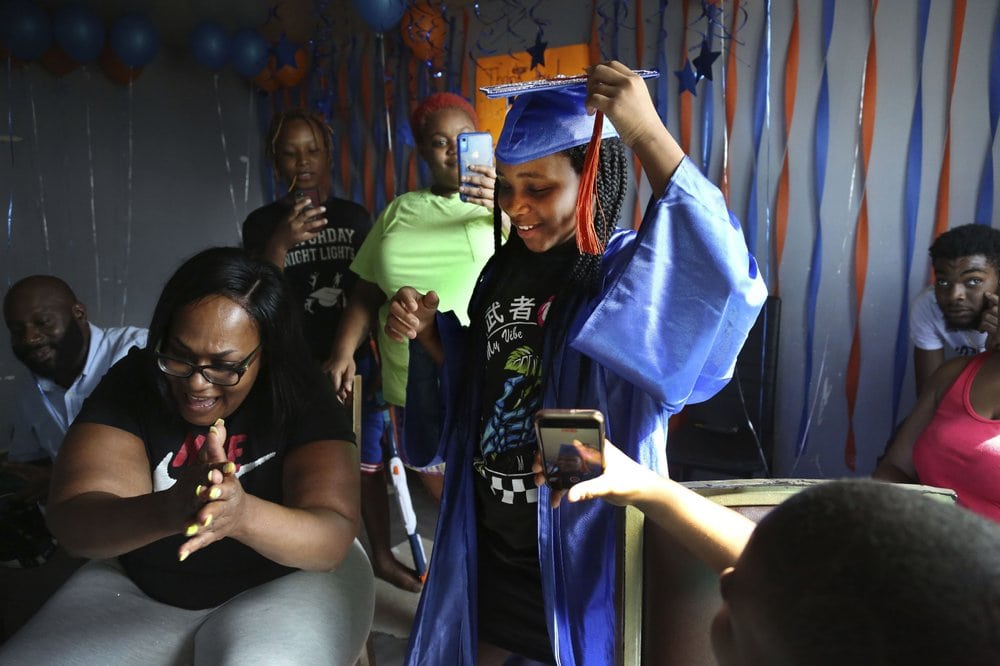 A recurring thought was making the unemployed single mother desperate: That her kids could go hungry.

At the peak of the coronavirus pandemic this spring, Sharawn Vinson often woke up crying. A recurring thought was making the unemployed single mother desperate: That her kids could go hungry.

There was also fear of contracting the virus, which has disproportionately hit low-income Black families like hers. Meanwhile some of the largest protests against racial injustice in decades were transpiring right outside their window, after the family had experienced its own terrifying encounter with police earlier in the year. There were unpaid bills, and feelings of shame from having to go to a soup kitchen in search of a meal.

So Vinson made the painful decision to send 11-year-old twins Mason and Maddison to live with their father, six states to the south, knowing that way they’d at least be fed.

“I needed them to breathe,” Vinson said, wiping away tears in her living room of peeling gray walls in a Brooklyn housing development.

Vinson was not alone in struggling to put food on the table in this historically tumultuous year. In New York City alone, an estimated 2 million residents are facing food insecurity, a number that the city’s mayor estimates nearly doubled in the pandemic amid the biggest surge in unemployment since the Great Depression. The scope of the problem outstrips previous crises such as the Great Recession, according to those who are working to combat it, and it’s not going away anytime soon.

“It’s never been this tragic for such a sustained period of time. Since COVID hit, the numbers of people in line at food pantries and soup kitchens skyrocketed, and it’s not going down,” said Rosanna Robbins, director of food access and capacity at City Harvest, the city’s biggest food rescue organization. “And so I think for us it’s just adjusting to the fact that we expect there to be a real need for free food for a very long time to come.”

When New York schools closed in March, Vinson’s children lost overnight the free breakfasts and lunches they relied on in normal times. Grocery store shelves were poorly stocked, and her pantry was almost bare. She began skipping meals to make sure they ate, and having them wake up later to try to trick hunger by giving them two meals a day instead of three.

“You never realize how important schools are until you don’t have them,” Vinson said.

“I’d open the refrigerator and I’d see struggle,” she added, “and also sacrifice.”

Oldest daughter Jasmin, 25, and 5-year-old grandson Hunter were living at a homeless shelter but came to visit her at the Lafayette Gardens public housing complex, where the family would share whatever they could scrape together for lunch.

“It got to the point where the kids would unconsciously save a chicken wing for Hunter,” Vinson said.

The family was cooped up for weeks during lockdown, living on just $1,800 a month in worker’s compensation from an on-the-job injury Vinson suffered last year when she fell and tore her meniscus.

From the dusty kitchen window of their 16th-floor apartment, they could see the deserted basketball court, slides and monkey bars at the Classon Playground, closed due to the pandemic.

As she tried to stretch meals of spaghetti and frozen burgers, the kids would argue over everything from who got to control the TV remote to who got the last snack. “Everybody was depressed, angry,” Vinson said.

Vinson was no stranger to hunger, having been raised in poverty by her mom, also a single mother. Vinson had the first of her six children at age 18 and recalls struggling to pay for diapers and food. But from her mother she learned values that have helped sustain her in difficult times, such as grit and generosity.

She took comfort in prayer and gospel music. One song in particular spoke to her: Melvin Crispel III’s “Not the End of Your Story.”

“I know that this is just not it,” she said of getting through the pandemic. “There’s more, there’s something, it’s not the end.”

Across the city, lines at pantries stretched for blocks. Social distancing was complicating food distribution efforts, and many pantries lost older volunteers who stayed home due to high risk of severe effects of COVID-19. A network of churches, volunteers, city government offices, restaurants and immigrant centers stepped in to fill the void.

Vinson then saw a Facebook post seeking volunteers for a pantry that is run by Kiana Muschett-Owes, the owner of Katie O’s restaurant, and nonprofit Rethink Food NYC, which helps fund meals for her initiative, Soul Food for the People. The pantry has provided hundreds of meals to people in need along with notes bearing inspirational prayers or good wishes such as “What doesn’t kill you will build you.”

“I said, you know what? That’s something that’s up my alley,” said Vinson, whose job before injury and the pandemic was at a shelter for people with mental illnesses and chemical addictions.

Vinson also felt she could set an example for her children. She began bringing Jasmin and the twins to help distribute the food as fellow volunteers, helping teach them values she got from her own mother. It was also a way to make sure her kids got at least one meal a day, from the pantry.

Things seemed to be looking up, but protests and clashes sparked by the police killing of George Floyd raised haunting memories of the incident from earlier in the year when police stormed the apartment building searching for a shooting suspect and pointed their guns at Mason as he was cleaning the litter for his cat, Shadow.

It traumatized the boy and made him angry at police, she said. One day this summer, as she sat outside watching the latest protest, a neighbor called out her name. Across the street, Mason was jumping up and down on top of a patrol car. Vinson ran over.

Soon after, she called her ex-partner in North Carolina, and on June 4 the twins headed south.

Living without them was hard, she said, but it bought her time to stabilize her ability to provide for them. She saved up food stamps and some money, and found a job working for the 2020 U.S. Census.

One day she asked the restaurant owner who ran the pantry if she could bring back some trays for her housing complex. That effort has since grown to dozens of meals plus groceries and protective face masks that she and other volunteers distribute each Saturday.

The twins finally came home in August, in time for Maddison to celebrate her remote graduation from middle school along with friends and family and for Mason to take part in the first practice of the Brooklyn United Youth Football season.

The police department apologized for the incident involving Mason and hosted him and a group of other kids and their families to discuss their concerns over pizza and chicken wings with high-ranking officers.

“These kids have been enduring a lot in the last couple of months, from the COVID wave to the Black Lives Matter, to the protesters, to the police brutality,” Vinson said. “And not too many times people stop and ask, How do they feel?”

The coronavirus outbreak has slowed significantly in New York compared with earlier this year. But times remain tough: Their rent is four months overdue, and the cable is about to be cut off. On a recent day the bathroom flooded, sending water running through the halls.

“There’s so many people who are out here who are hungry,” she said. “I got my grandson, I got my kids and I got my life. What do I got to complain about?”