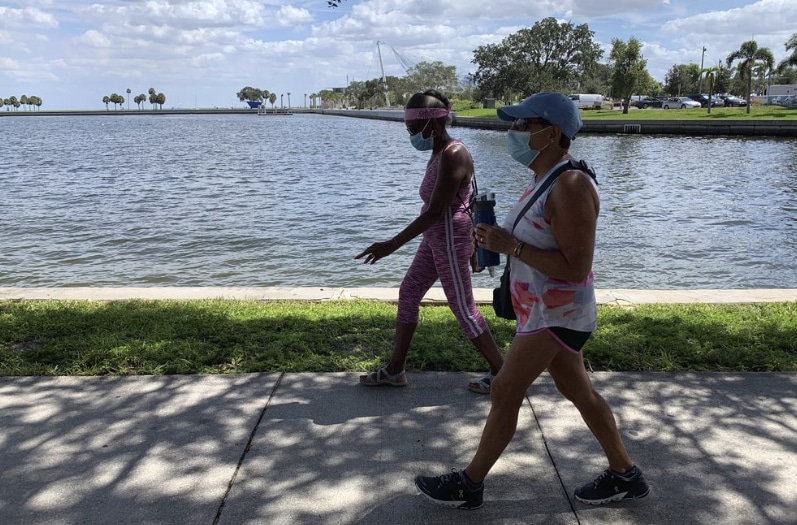 President Donald Trump’s remarks at a campaign event in Ohio this week reverberated all the way to a sparkling waterfront in Florida, where senior citizens parsed his assessment of the coronavirus pandemic.

Trump said that COVID-19 was seriously affecting “virtually nobody” under the age of 18 and sought to frame the pandemic as largely impacting older Americans, as he argued for school districts to resume in-person learning.

“Now we know it affects elderly people with heart problems and other problems,” Trump said. “If they have other problems, that’s what it really affects. That’s it.”

Florida, where 34 percent of the population is over the age of 55, is a potential swing state for Trump’s re-election campaign. Democratic challenger Joe Biden has made some inroads among older voters here, according to recent polls, but the coronavirus could affect the race in profound ways.

Trump’s recent remarks made Liz Cillo, a 72-year-old retiree from St. Petersburg, laugh bitterly. “We’re dispensable. We’re old. I feel as though he’s never showed any empathy or compassion toward us.”

Unlike in previous years, those who study voting patterns and elderly affairs issues say new trends appear to be unfolding this year. Jeff Johnson, the state director for the Florida AARP, says that among voters who are over 65, this year’s presidential race seems to be more “in play” than in years past.

“The best we can tell, it seems to be driven by coronavirus,” he said.

Which makes sense, he added. States like Florida have been hit hard by the pandemic, and no other demographic has been affected more than older folks. About 93 percent of Florida’s 13,600 deaths from the virus have been people 55 and older. On Friday, Gov. Ron DeSantis lifted all restrictions on restaurants and other businesses in Florida in a move to reopen the state’s economy despite the virus’ spread.

Cillo, who did not vote for Trump in 2016 and won’t in November, feels that the president has thrown seniors under the bus. “We’re the most vulnerable,” she said.

She and her friend, 77-year-old Eva Johnson, walk every day along St. Petersburg’s downtown, which is dotted with restaurants and shops on one side and Tampa Bay on the other. They keep 6 feet apart and wear masks. Both are extremely worried about catching the virus, and feel lucky that they don’t know anyone who’s gotten it.

Nearby, 67-year-old Raymond Holmes was doing his daily five-mile power walk through downtown. Holmes is a Trump supporter who defends the president’s remarks about older people and the coronavirus.

“Trump could appear to have been insensitive but you have to understand that he didn’t want people to panic and he couldn’t necessarily say one group of people needs more than another group of people. He had to placate and he had to handle the entire population,” he said.

The president’s comments touched a nerve with the family of Celia Yap-Banago, a nurse in Kansas City, Missouri, who died of the coronavirus at the age of 69. She was just a week short of her 40-year anniversary working at the Research Medical Center and was close to retirement when she died.

Her son, Jhulan Banago, said the virus’ toll clearly extends beyond older Americans like his mother, scarring his family and infecting people he knows.

“I don’t know if I fully agree with that,” he said of Trump’s comments. “I have some doctor friends as well. Unfortunately one has tested positive for it. And I have a lot of nursing friends as well and they see the effects of it. … I think it affects more than just the elderly.”

Jay Mangold, a 69-year-old retired business owner in St. Petersburg, said people need to take a “degree of personal responsibility,” when it comes to the virus.

“It’s unfair to expect everyone else to put their lives on hold,” he said, adding that he’s taking precautions because of his age, like wearing masks indoors and staying out of crowds. He tries to exercise daily to boost his immune system.

He also wonders about the incessant news coverage of the virus, and whether discussion of it will vanish if Biden wins.

“It’s all the TV news people are talking about,” he said. “It’s like force-feeding a goose for foie gras.”

Michael Carl, who is 55, doesn’t think Trump has handled the pandemic well, especially when it comes to older Black people. He cited the Trump administration’s suing to overturn the Affordable Care Act, as evidence. And he feels that urging schools to open puts elders at risk.

“He could make a bigger effort,” said Carl, then added with a sigh: “Again, if seniors go ahead and die, there’s no social security to pay out.”

Ann Wrigley, a 78-year-old who was walking her Shih Tzu, said she’s not sure if the government could have done better when it comes to senior citizens.

“I think it’s up to us. We’re all individuals, and we need to do what we think is right,” said Wrigley, a registered Republican in Ohio before moving to Florida 16 years ago. She says she’s undecided on the presidential race.

“I just make my decision at the end when I walk in to vote,” she said.