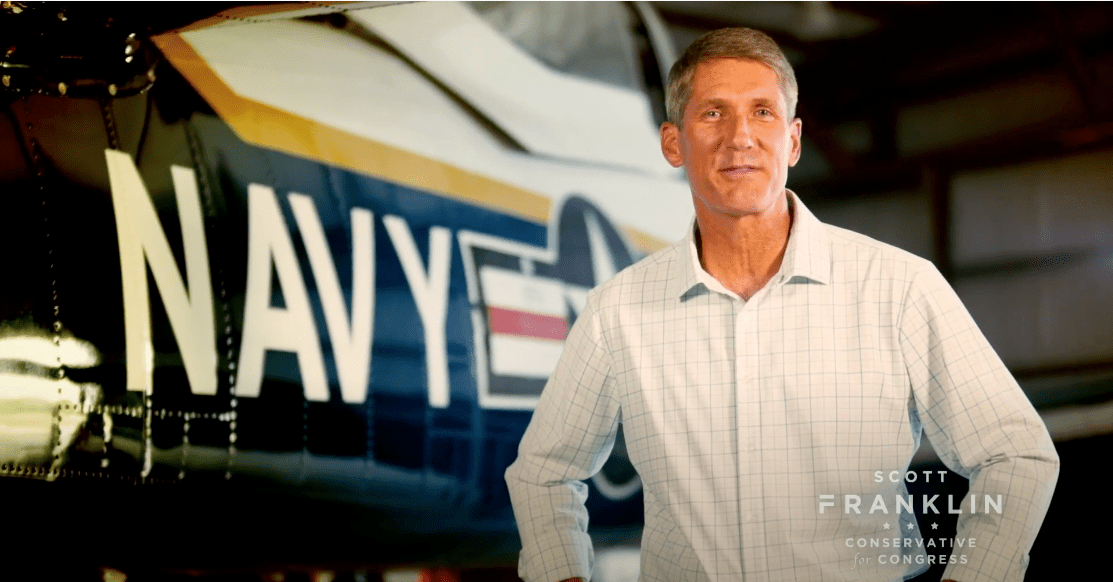 Franklin capitalized on a voter registration advantage, despite a funding deficit.

“I’m excited about the task ahead,” Franklin said in a statement. “I do want folks who did not vote for us to know that I’m looking forward to representing everyone in this district. When I joined the Navy, you put the uniform on and you go get the job done. You put your differences aside, and you accomplish the mission. That’s what I plan to do.”

“Tonight we did not have the result that we wanted and that so many had fought for. Our campaign was about the working people and middle class families, who have found it harder and harder to make ends meet. It was about protecting Social Security and Medicare, which is a lifeline for seniors in this country and helps to make sure they can retire in dignity. It was about fighting for middle-class tax cuts and rebuilding our economy. It was about bringing down the outrageous costs of healthcare and lowering prescription drug prices,” Cohn said. “Advancing these issues is central to bettering life for all Americans, and we must not stop until we accomplish them.”

Whatever happened in the Primary Election, Democrats saw a glimmer of hope to gain another seat in the U.S. House of Representatives, either by taking on an embattled incumbent in Florida’s 15th Congressional District or by running, again, for an open seat.

Americans for Prosperity, which endorsed Franklin, released the following statement on Franklin’s win:

“Scott Franklin’s message of breaking down barriers for every Floridian and commitment to economic recovery through pro-growth reforms clearly resonated with voters,” Skylar Zander, AFP Action Senior Advisor said. “Our grassroots spread the word on how Scott Franklin will help them keep more of what you earn, eliminate red tape that prevents businesses from recovering, and rein in Washington’s spending addiction.”

The Wingman PAC, which served as a single-candidate support PAC for Franklin, responded to his win, stating:

“On behalf of Wingman PAC, we congratulate Navy veteran, proven businessman and local leader Scott Franklin for his impressive win in Florida’s 15th Congressional District…Thank you to our Wingman PAC supporters, whose personal and monetary support allowed the committee to organize a robust voter contact program and advertisements that aired on broadcast, cable and digital throughout the three-county region.”

Democrats lost the open race two years ago when Democrat Kristen Carlson came within 6 points of Ross Spano. But her loss was overshadowed by revelations that Spano had accepted what amounted to $180,000 in illegal contributions for the race, money that might have put him over the top in the race.

The contributions, which stemmed from personal loans from two Spano friends, landed Spano the subject of a federal investigation. Democrats hoped that lingering cloud would pave the way to victory proven illusive just two years prior.

But Franklin beat them to it, setting up an arguably harder race.

Everyone knew the race would be close. Various polls put Cohn 2-3 points behind Franklin, but within polling margins of error.

The Cook Political Report had listed the seat “lean Republican,” giving Franklin the edge. Voter registration in the district also favored Franklin, with 36% of the district’s tri-county electorate in the GOP and 35% registered as Democrats, a margin so close Democrats could taste it.

Franklin held onto those advantages and mounted attacks typical of 2020 Republican talking points: law and order, fiscal conservatism and, perhaps most importantly, not being a socialist. Ads accused Cohn of siding with leftist extremism and supporting a socialist agenda. He attempted to tie Cohn to protests against police brutality, which in some places have led to looting, destruction and violence.

Though Cohn fought back, noting that while he supports police reforms, he does not support defunding the police, it wasn’t enough. Cohn campaigned against Franklin’s party affiliation, noting Franklin’s support for President Donald Trump’s tax package and for repealing the Affordable Care Act, a move made even more provocative a talking point given the current COVID-19 pandemic.

Cohn frequently cited the 2018 Trump tax package in talking points, claiming it raised taxes on 86 million Americans. The claim is not false, but it looks only at the last year of the tax cuts, 2027, and leaves out the fact that about 80% of taxpayers would get a tax cut in the early years of the package, according to the nonpartisan Tax Policy Center. By 2027, about 50% would see an increase, a greater proportion of whom are in the bottom 80% of taxpayers.

Franklin also survived a money deficit. Through the life of his campaign, as of mid-October, Cohn had raised nearly $1.9 million while Franklin brought in more than $1.2 million, $400,000 of which came from Franklin himself.

previousDemocrats losing paths to Senate control as GOP hangs on