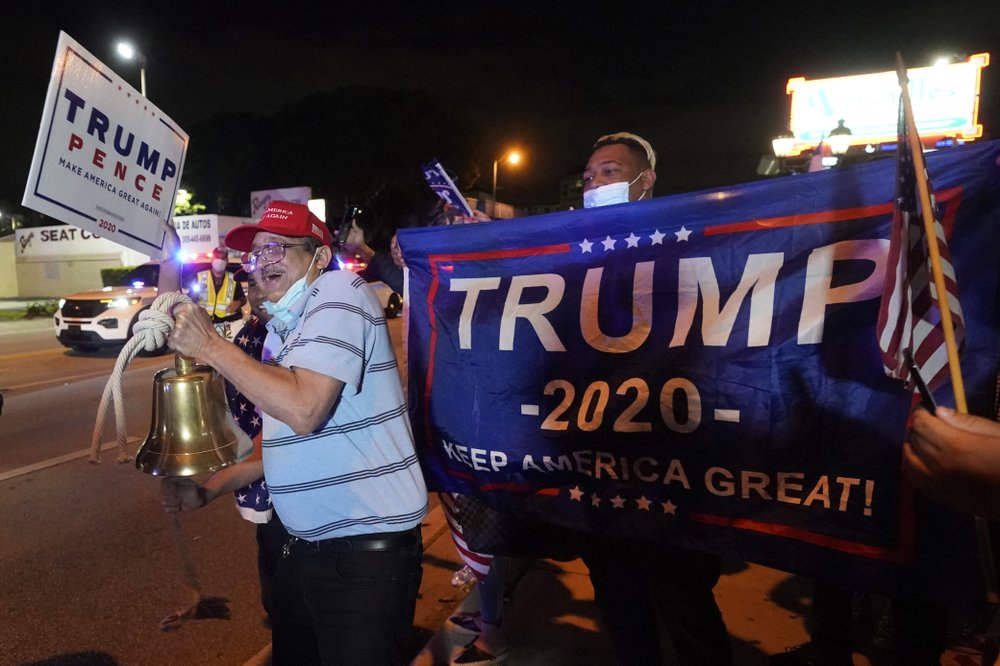 Losing by almost 4 points? That's a landslide by Florida standards.

Perhaps only in Florida is a loss by fewer than 4 percentages points considered a public drubbing.

In a state famous for razor-thin margins, the size of former Vice President Joe Biden’s loss to President Donald Trump was humiliating for Democrats and sent many searching for answers to how they failed to close the deal with voters — again.

Democrats zeroed in on two clear explanations: Biden didn’t connect with the state’s Latino voters, performing particularly poorly with Cuban voters in South Florida. They also second-guessed the party’s decision to freeze in-person organizing during the worst of the pandemic, a decision that set them back in reaching voters.

“Clearly, Biden was not able to capture the imagination of the Florida electorate and create the type of enthusiasm to go out and vote for Biden like Trump did with his base of supporters in the state,” said Fernand Amandi, a Miami-based Democratic pollster. “It’s an unacceptable record of futility. What makes it so vexing is that the problems that need to be fixed are so apparent. But they just don’t get fixed.”

Amandi focused on the Biden campaign’s struggles to connect with Hispanic voters in the state.

Trump and Republicans pummeled Biden for months with misleading claims suggesting he was a “socialist” and would cater to the left wing of the Democratic Party. The attacks carried added power with Cuban and Venezuelan Americans, who associate the labels with authoritarian and corrupt Latin American leaders.

Biden’s weakness was most evident in his underperformance in Miami-Dade County, which has the state’s deepest concentration of Hispanic voters, particularly Cuban Americans. Biden won the county, the state’s most populous, by just 7 percentage points — compared with Democrat Hillary Clinton’s 30-point victory margin four years ago against Trump.

AP VoteCast, a survey of the Florida electorate, found Trump won 58% of Cuban American voters statewide, while voters with South American heritage split evenly between Biden and Trump. The survey said Puerto Rican voters backed Biden by about 2 to 1.

“When you look at Miami-Dade in particular, there was a lot of advertising on the other side of the aisle dealing with socialism and in some cases even the word communism,” said Democratic Rep. Charlie Crist, a former Republican governor who has held three statewide offices.

“I think that obviously had an impact,” Crist said. “When you’re attacked you need to fight back. I’m not sure how much of the fighting back occurred on our side.”

Trump had a head start in his adopted home state and used it to make inroads with the Hispanic community, which accounts for about 1 in every 5 voters in Florida.

Biden had a late start. Not only did he have to secure his party’s nomination, he was sidelined from a more aggressive campaign because of the coronavirus pandemic — for a while, Florida was off limits as an epicenter of the outbreak.

While Biden and his running mate, Sen. Kamala Harris, did eventually visit the key battleground state, much of the campaign was conducted virtually because of concerns over the pandemic. When Republicans resumed going to door-to-door, Democrats remained on the sidelines.

But the problems predated the pandemic, said state Sen. Annette Taddeo, who has long been a critic of her party’s approach to campaigning.

“You need a constant presence, and you cannot take minority communities for granted,” she said. “You can’t come in two months before an election and expect to excite these communities.”

Florida Republican Gov. Ron DeSantis, for one, credits the Trump campaign for generating excitement, even amid a pandemic.

“He won a really significant victory in the state of Florida,” said DeSantis, a key Trump ally.

“I think his barnstorming, to which the extent of his campaigning matters — in his case, doing these big events … the electricity they generated,” he said.

Some Democrats also give Republicans credit for registering thousands of new voters and narrowing the voter registration advantage Democrats have long had.

But Democrats also turned the tables on Republicans in absentee ballot requests, a key Republican strength in previous election cycles that helped drive turnout. While more Democrats voted by mail ahead of Tuesday’s election, Republicans also made a quick pivot to turn out more of their party members to cast ballots in person during the early voting period.

While Democrats have long outnumbered Republicans, they have had little to show for it. In 2016, Clinton narrowly lost to Trump. Two years ago, Democratic gubernatorial candidate Andrew Gillum, who would have been Florida’s first Black governor, narrowly lost to DeSantis. U.S. Sen. Bill Nelson also narrowly lost his bid for reelection.

As it stands, Democrats now only occupy one statewide office — the Commissioner of Agriculture, which is occupied by Nikki Fried, who is said to be considering a possible run for higher office. But her success could depend on what Democrats learn from their latest defeats.

For Taddeo, the Democratic state senator, it means going back to basics. “It’s a math issue,” she said. “We need to register voters all the time.”