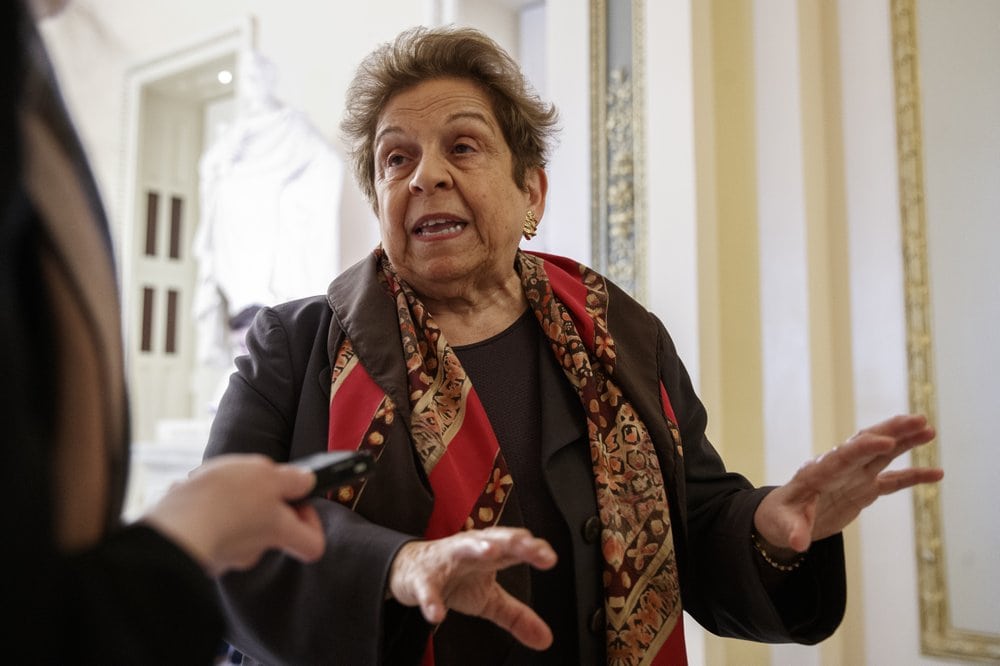 Could Shalala be making a return to the federal government after losing her House seat?

In politics, there can sometimes be an upside to losing.

President-elect Joe Biden is eyeing several Democrats who lost congressional reelection races last month for key positions in his administration. They include outgoing Reps. Abby Finkenauer of Iowa and Donna Shalala of Florida and Sen. Doug Jones of Alabama.

Their consideration continues a long Washington tradition of defeated politicians seeking shelter in a new White House. Landing a job in a new administration can both position the losing candidates for future campaigns and provide the incoming President with important relationships on Capitol Hill.

“It’s good to have people who know how to roam the halls of Congress,” said Andrew Card, who directed George W. Bush’s transition and later served as the Republican President’s Chief of Staff.

Biden’s transition team declined to comment on the prospects of any individual contender for an administration role. He has already unveiled much of his economic and national security team and is expected to announce picks soon for key health positions.

But there are still a large number of major Cabinet positions to be filled, including Attorney General and leaders of the departments of Labor, Commerce and Transportation. As Biden considers his options, his personal connection with some of the defeated lawmakers could carry significance.

Finkenauer, who is under consideration as Labor Secretary, owes her start in politics in part to Biden. As a college student, she worked on his ill-fated 2008 presidential campaign. A decade later, he headlined a rally for her winning congressional campaign. She was a key surrogate for Biden ahead of the Iowa caucuses.

“I know they have a long relationship, and it’s been mutually supportive,” said former Assistant Dubuque City Manager Teri Goodman, who is a decades-long Biden supporter and has watched Finkenauer’s rise.

Finkenauer narrowly lost her bid for a second term in a rural northeast Iowa district. But since then, the former state legislator, who made a name promoting public employee unions, has had conversations with senior Biden transition officials about leading the Labor Department, according to Democratic sources familiar with the communications.

Jones, meanwhile, is in the mix to lead the Justice Department, partly due to his work as a U.S. attorney who helped convict Ku Klux Klansmen for the Birmingham church bombing that killed four Black girls.

He narrowly won a special Alabama Senate election in 2017, but lost reelection last month. He also has a longstanding personal relationship with Biden dating to Biden’s first presidential campaign in 1988.

Biden spoke at Jones’ campaign kickoff in 2017, saying of Jones, “He knows your heart and will never let you down,” and was the first to telephone him on Nov. 3 after he’d lost the seat to Republican Tommy Tuberville.

Shalala is perhaps the most administration-ready of 2020′s losing Democratic class. She spent eight years as Secretary of Health and Human Services under Bill Clinton and then served as president of the University of Miami before winning a South Florida House seat in 2018. She has heard from Biden transition officials.

Beyond the outgoing members of Congress, Biden is also considering his former rivals in the Democratic primary for jobs. He already tapped California Sen. Kamala Harris as his Vice President.

Biden is weighing roles for Pete Buttigieg, the former South Bend, Indiana, Mayor who mounted a surprisingly strong campaign in the early stretch of the Democratic primaries. Biden has expressed deep affection for Buttigieg, who was one of the first major candidates to drop out of the race and endorse Biden.

Montana Gov. Steve Bullock, who lost his Senate bid after leaving the White House race, is part of discussions for a Biden administration role, perhaps as Secretary of Agriculture. Another name under consideration for Agriculture is former North Dakota Sen. Heidi Heitkamp, who lost in 2018 but has been a champion of reinvigorating rural America.

“If they think I can be helpful, then good,” Heitkamp told The Associated Press recently.

Missouri Sen. John Ashcroft’s defeat in 2000 paved the way for his four years as Attorney General under George W. Bush, including during the aftermath of the 2001 terrorist attacks in the United States.

Former Senate Majority Leader Tom Daschle of South Dakota, who lost election to a third term in 2004, was tapped after the 2008 election by Obama to head Health and Human Services, which would have put him at the forefront of the health care debate. Daschle withdrew from consideration after questions arose about his failure to properly report and pay income taxes.

The most successful losing congressional candidate of the past 50 years is George H. W. Bush, who as a two-term Republican U.S. House member from Texas lost his 1970 bid for Senate against Democrat Lloyd Bentsen.

As a consolation, President Richard Nixon picked Bush to be ambassador to the United Nations, a disappointment for the up-and-comer who was hoping for a treasury job. But the post led to an ambassadorship to China, and the experiences were valuable when as President he found himself leading a global coalition in Operation Desert Storm.

“The significance is that was the beginning of his self schooling and expertise in foreign affairs,” said Chase Untermeyer, director of White House personnel during George H. W. Bush’s administration.

In a White House led by a Capitol Hill veteran like Biden, a team with a background in Congress is particularly valuable to those around the President, since Biden remains well acquainted with the rules and many members.

But considering Biden hasn’t been a senator in nearly a dozen years, Card said those with more recent experience in Congress will be helpful.

“More than helping the President, these people can help the White House staff dealing with members of Congress,” said Card. “They know where the congressional gym is, and how to get invited to a congressional luncheon. And that’s an advantage.”