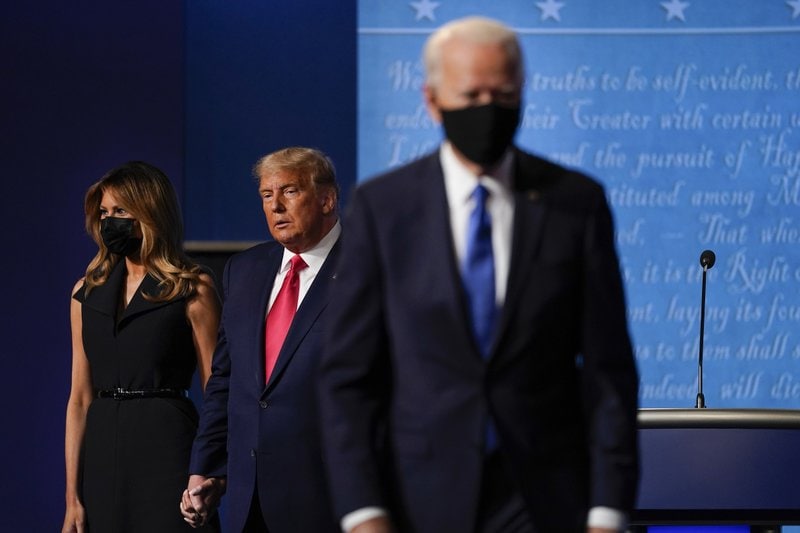 It's a tradition that started with Reagan but continued through more contentious transitions.

Presidential traditions are usually known for their solemnity and carry the weight of future historical significance. This one began with cartoon turkeys and a reference to lunch.

As he was preparing to leave the White House in January 1989, President Ronald Reagan wanted to leave a note for his successor, George H.W. Bush, and reached for a pad emblazoned with a cartoon by humorist Sandra Boynton under the phrase, “Don’t Let the Turkeys Get You Down.” It featured a collection of turkeys scaling a prone elephant, the symbol of both men’s Republican Party.

“Dear George, You’ll have moments when you’ll want to use this particular stationary. Well, go to it,” Reagan scrawled. He noted treasuring “the memories we share” and said he’d be praying for the new President before concluding, “I’ll miss our Thursday lunches. Ron.”

Thus was born the tradition of departing presidents leaving a handwritten note in the Oval Office for their successors. The missives’ contents start off as confidential, but are often eventually made public by archivists, references in presidential memoirs or via social media after journalists and others filed requests to obtain them.

The 32-year tradition is in peril this year. President Donald Trump has refused to accept the results of November’s election and vowed not to attend Joe Biden’s inauguration on Wednesday. That makes it doubtful Trump will leave behind any handwritten, friendly advice for Biden.

Presidents often write reflectively at the end of their time in office, including George Washington, who stated that he was “tired of public life” in recording why he wasn’t seeking a third presidential term. But historians say Reagan’s is likely the first instance of a personal letter being passed between presidents as they left and entered office.

“It was a sort of a revelation that a note like this was left,” said Jim Bendat, author of “Democracy’s Big Day: The Inauguration of Our President.” “We’ve come to expect them. It’s a great tradition. It’s one of those new traditions. And the traditions for Inauguration Day are like that — they often evolve through the years.”

The notes are striking in their simplicity given just how big the job of the presidency is. But they are also notable in their camaraderie and common purpose — especially since the handoff of power is often an unhappy one: Reagan to Bush was the last time the country had one President from the same party succeed another.

Despite losing to Bill Clinton in the bitter 1992 election, Bush followed Reagan’s lead, this time on more stately, White House stationary. “I leave a note on the desk for Bill Clinton. It looks a little lonely sitting there,” Bush recalled in his book “All the Best, George Bush: My Life in Letters and Other Writings.”

“When I walked into this office just now I felt the same sense of wonder and respect that I felt four years ago. I know you will feel that, too,” Bush wrote in the note, adding, “I wish you great happiness here. I never felt the loneliness some presidents have described.”

He continued, “I’m not a very good one to give advice; but just don’t let the critics discourage you or push you off course,” before concluding, “Your success now is our country’s success. I am rooting hard for you. Good luck — George.”

Those words were so touching that the new President’s wife, Hillary, later recalled they made her cry.

“It speaks not only to his grace, but ultimately what the presidency should be all about, which is thinking about your country first,” said Mark K. Updegrove, a historian and CEO of the Lyndon Baines Johnson Foundation, who has written about the Bush family. “Though he had been soundly defeated by Bill Clinton, George H.W. Bush, as a good American, was wishing the new President well.”

Writing to that president’s son, incoming President George W. Bush in 2000, Clinton noted that the “burdens you now shoulder are great but often exaggerated” and that the “sheer joy of doing what you believe is right is inexpressible.”

In his own letter to President Barack Obama eight years later, the younger Bush advised that “critics will rage. Your ‘friends’ will disappoint you,” but ”no matter what comes, you will be inspired by the character and compassion of the people you now lead.”

Bush’s twin daughters, Jenna and Barbara, were 27 at the time. They wrote a sort of kids’ guide to the White House for Malia and Sasha Obama, then 10 and 7. It included such advice as “slide down the banister of the solarium” and “when your dad throws out the first pitch for the Yankees, go to the game.”

In his letter to Trump in 2017, Obama wrote, “This is a unique office, without a clear blueprint for success, so I don’t know that any advice from me will be particularly helpful.”

But Obama did offer some words that now appear prophetic given Trump’s impeachment for inciting the deadly mob violence at the U.S. Capitol. “We are just temporary occupants of this office,” he wrote. “That makes us guardians of those democratic institutions and traditions — like rule of law, separation of powers, equal protection and civil liberties — that our forebears fought and bled for.”

“It’s up to us to leave those instruments of our democracy at least as strong as we found them,” Obama continued.

Updegrove said even if the note tradition stops with Trump, it could easily start again when Biden leaves office. He has already been Vice President and spent 36 years in the Senate, where tradition and bipartisan congeniality are strong.

“There’s no doubt in my mind that he would do it graciously,” Updegrove said.