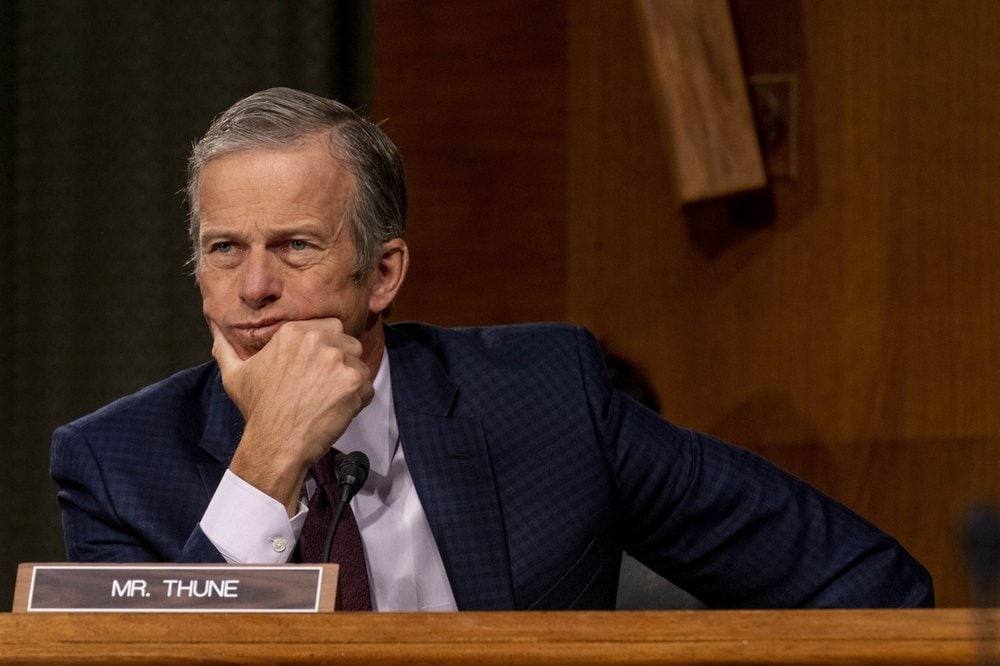 It's not just Trump critics who are leaving the party, loyalists are sending a message.

Longtime South Dakota Republican voter Jim Thompson is ready to leave the GOP, hoping that an exodus of Donald Trump supporters like him will punish the state’s preeminent politician, Sen. John Thune, for defying Trump.

Thompson, a retired rodeo announcer and broadcaster, watched Trump’s calls for supporters to come to Washington to stop Congress from certifying Joe Biden’s election victory and he saw the ensuing assault on the U.S. Capitol on Jan. 6 . But as Congress tries to hold Trump accountable for his actions, Thompson sees an agenda to banish the former president from politics and return the party to establishment figures such as Thune, the second-ranking GOP leader in the Senate.

Thune was among the Republicans who condemned the insurrection at the Capitol, calling it “horrific” and pledging to “hold those responsible to account.” But like most of his GOP colleagues, the senator this past week signaled he was not speaking about Trump.

Thune was among the Republicans who condemned the insurrection at the Capitol, calling it “horrific” and pledging to “hold those responsible to account.” But like most of his GOP colleagues, the senator this past week signaled he was not speaking about Trump.

“I think the whole impeachment thing is a joke,” said David Buchanan, the president of a small Bible school in South Dakota who proudly displayed a Trump flag over his home. “They’re trying just to destroy President Trump. They see him as a threat.”

Buchanan is among those who would like to hear Republicans undertake a more robust defense of Trump. Instead, most have argued that an impeachment trial is unconstitutional, not that Trump is blameless for the riot.

Buchanan said he was frustrated to hear Thune on the radio countering Trump’s allegations of widespread election fraud.

“What we’re seeing is the destruction of the United States of America as it was founded,” he said.

Embedded in these views is a deep skepticism about the mainstream media coverage and a belief in an alternative narrative — by now a defining characteristic of Trump’s most ardent backers, even those who once trusted the news.

Brie Korkow, a 37-year-old from Pierre who runs a family rodeo business, used to love to research political issues while on a debate team in college. But recently, she has given up hope of trusting national media outlets and struggles to know what to believe. She trusts her local newspaper, but feels that even fact checks from national outlets are no longer reliable.

“It goes back to being able to find the truth about something,” she said. “With social media, it’s almost impossible.”

Although uncertain about what really happened at the Capitol, Korkow does believe Trump’s election claims helped unleash the insurrection. But, echoing Republican senators, she believes an impeachment trial will only be more divisive. She hopes the Senate will “just let bygones be bygones.”

Besides, by the end of Trump’s four years in office, Korkow says she was no longer shocked by Trump.

But Republican lawmakers can still feel his pointed jabs. When Thune disputed the baseless allegations of election fraud, Trump declared the Senator’s “political career over” and suggested GOP Gov. Kristi Noem, a Trump fan favorite, make a primary challenge in 2022. She quickly bowed out from challenging Thune next year.

Still, talk of a primary has not died.

A private Facebook group called “Primary John Thune in 2022” has attracted over 3,000 members. One of them, Bruce W. Whalen, said Thune’s refusal to support Trump’s claims of fraud has fueled interest.

“We can’t understand as South Dakotans why Thune, (Sen. Mike) Rounds and (Rep. Dusty) Johnson can’t see what we see,” he said.

Whalen had contemplated traveling to Washington for Trump’s protest, convinced that Thune, whom he called a “never-Trumper,” was letting the election be stolen. As Whalen watched on television as a mob of Trump supporters attacked the Capitol, he remembers almost instantly being convinced they were actually antifa activists. Antifa is shorthand for anti-fascists and is a broad description for the far-left-leaning militant groups that resist neo-Nazis and white supremacists at demonstrations and other events.

Whalen, who in 2006 had enough GOP support to represent the party in a statewide race for Congress, now sees Trump’s impeachment trial as “lofty accusations that they are trying to slime him with.”

In the meantime, some longtime state Republican figures are frustrated with their senator’s hesitation to convict Trump.

“He deserves to be convicted,” said David Volk, a former state treasurer.

Volk has observed a steady rightward lurch in Republican politics over the years that has culminated in widespread support for Trump. Though he believes that Thune won’t face much much trouble being reelected, Volk feels Noem has ensured that Trump’s brand of politics lives on in the state.

“There’s a lot of people who would like to see this go away, Trump go away,” he said. “But there’s no way they’re going to get him to go away.”

Others, like Tom Barnett, a former director of the state’s bar association, have given up on the Republican Party. Last year he changed his party affiliation after 50 years with the GOP, saying he could no longer support officials who would not stand up to Trump.

He said Trump “not only stole the party, he ruined the party.”

previousSchool reopening could leave millions of students behind