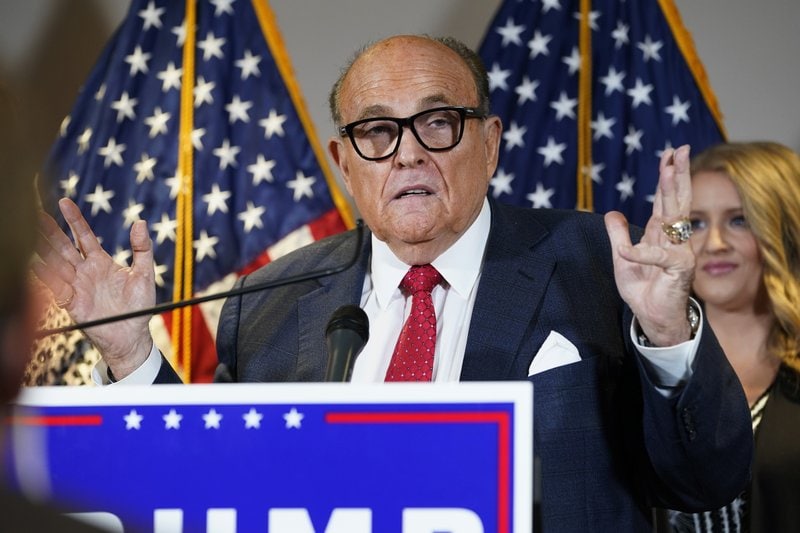 Smartmatic’s participation in the 2020 election was restricted to Los Angeles County, which votes heavily Democratic.

A voting technology company is suing Fox News, three of its hosts and two former lawyers for former President Donald Trump — Rudy Giuliani and Sidney Powell — for $2.7 billion, charging that the defendants conspired to spread false claims that the company helped “steal” the U.S. presidential election.

The 285-page complaint filed Thursday in New York state court by Florida-based Smartmatic USA is one of the largest libel suits ever undertaken. On Jan. 25, a rival election-technology company — Dominion Voting Systems, which was also ensnared in Trump’s baseless effort to overturn the election — sued Guiliani and Powell for $1.3 billion.

Unlike Dominion, whose technology was used in 24 states, Smartmatic’s participation in the 2020 election was restricted to Los Angeles County, which votes heavily Democratic.

Smartmatic’s limited role notwithstanding, Fox aired at least 13 reports falsely stating or implying the company had stolen the 2020 vote in cahoots with Venezuela’s socialist government, according to the complaint. This alleged “disinformation campaign” continued even after then-Attorney General William Barr said the Department of Justice could find no evidence of widespread voter fraud.

For instance, a Dec. 10 segment by Lou Dobbs accused Smartmatic and its CEO, Antonio Mugica, of working to flip votes through a non-existent backdoor in its voting software to carry out a “massive cyber Pearl Harbor,” the complaint alleged.

“Defendants’ story was a lie,” the complaint stated. “But, it was a story that sold.”

The complaint also alleges that Fox hosts Dobbs, Maria Bartiromo and Jeanine Pirro also directly benefitted from their involvement in the conspiracy. The lawsuit alleges that Fox went along with the “well-orchestrated dance” due to pressure from newcomer outlets such as Newsmax and One America News, which were stealing away conservative, pro-Trump viewers.

Fox News Media, in a statement on behalf of the network and its hosts, rejected the accusations. It said it is proud of its election coverage and would defend itself against the “meritless” lawsuit in court.

Fox “is committed to providing the full context of every story with in-depth reporting and clear opinion,” the company said in a written statement.

Giuliani and Powell did not immediately respond to requests for comment.

For Smartmatic, the effects of the negative publicity were swift and devastating, the complaint alleges. Death threats, including against an executive’s 14-year-old son, poured in as Internet searches for the company surged, Smartmatic claims.

With several client contracts in jeopardy, the company estimates that it will lose as much as $690 million in profits over the next five years. It also expects it will have to boost spending by $4.7 million to fend off what it called a “meteoric rise” in cyberattacks.

“For us, this is an existential crisis,” Mugica said in an interview. He said the false statements against Smartmatic have already led one foreign bank to close its accounts and deterred Taiwan, a prospective client, from adopting e-voting technology.

Like many conspiracy theories, the alleged campaign against Smartmatic was built on a grain of truth. Mugica is Venezuelan and Smartmatic’s initial success is partly attributable to major contracts from Hugo Chávez’s government, an early devotee of electronic voting.

No evidence has emerged that the company rigged votes in favor of the anti-American firebrand, and for a while the Carter Center and other observers held out Venezuela as a model of electronic voting. Meanwhile, the company has expanded globally.

Smartmatic is represented by J. Erik Connolly, who previously won what’s believed to be the largest settlement in American media defamation, at least $177 million, for a report on ABC News describing a company’s beef product as “pink slime.”

“Very rarely do you see news organization go day after day after day the same targets,” Connolly said in an interview. “We couldn’t possibly have rigged this election because we just weren’t even in the contested states to do the rigging.”

Fox, after receiving a demand for retraction from Smartmatic’s lawyers in December, aired what it called a “fact-checking segment” with an election technology expert. In the segment, the expert said there was no evidence of tampering — something the defendants knew from the start and reported elsewhere on the network, the complaint alleges.

Far from making the company whole, Mugica said he saw the segment — in which an unidentified voice asks questions referenced in the retraction letter — as an admission of guilt.

“They knew these truths just as they knew the Earth is round and two plus two equals four,” according to the lawsuit. “But they also saw an opportunity to capitalize on President Trump’s popularity by inventing a story.”