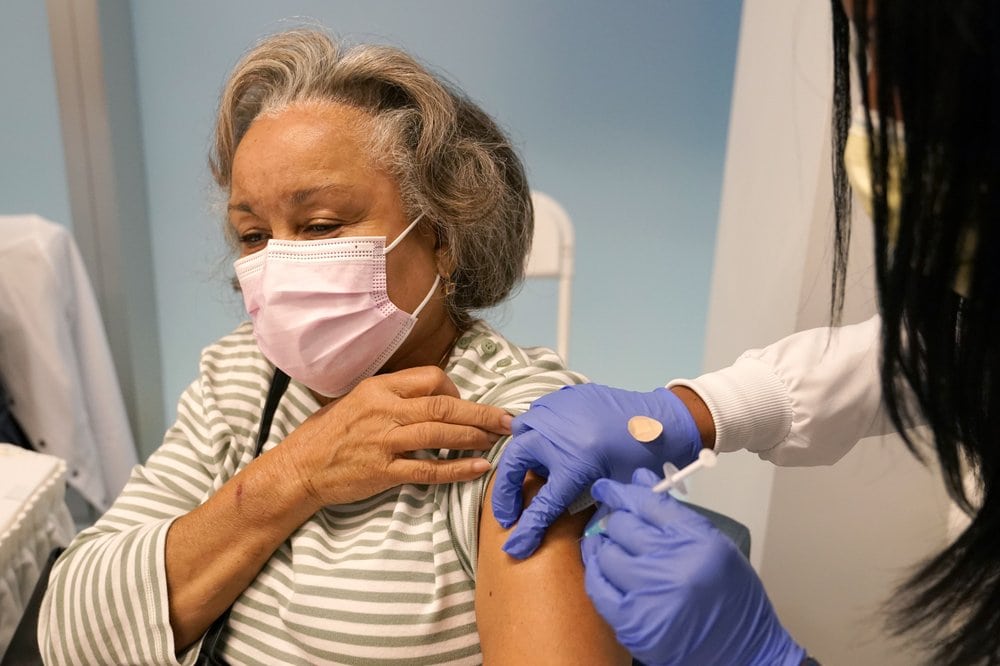 Hospitals only thaw as many vaccines each day as they know they will use.

The tiny glass vaccine vials are delivered to Miami’s largest hospital and immediately whisked to a secret location, where they are placed inside a padlocked freezer with a digital thermometer that reads minus 105 F. An armed guard watches outside the door.

The pharmacy staff at Jackson Health System often gets short notice on how many doses are coming — sometimes as little as 24 hours. As soon as the doses arrive, the pressure builds to administer them quickly, but the timing is complicated. The staff can thaw out only as much COVID-19 vaccine as the hospital can administer that same day.

The Associated Press was given exclusive access to a recent day of vaccinations at the system’s main hospital, offering a glance inside the hour-to-hour efforts that fuel the largest inoculation campaign in U.S. history. It is an anxious undertaking for both vaccine providers and Americans seeking the shots, and everyone has to watch the clock.

Appointments must be handled carefully — without overbooking but also with confidence that those who are booked will show up — to ensure that the fewest possible doses go to waste. Once mixed, the vaccine is good for only six hours.

“We don’t book any appointments until we know we’ve got the supply,” said David Zambrana, vice president of hospital operations. “We’re constantly checking the supply. You can feel the anxiety these folks have. We’ve heard people say, ‘You’ve saved my life’. They are coming with so much hope.”

Alette Simmons-Jimenez is part of a WhatsApp text group with about 60 women who keep a hawkish watch as appointment slots open in Miami-Dade, where Jackson Memorial Hospital is helping in the effort to vaccinate 465,000 of the county’s most vulnerable seniors who are 65 and older — from shuts-ins to snowbirds.

Someone alerted her on a recent evening that Jackson Memorial would offer an “extremely limited” number of slots starting at 8 a.m. the next day. Typically, 1,500 slots fill up in 15 minutes.

Simmons-Jimenez, 68, was on her computer by 7:30 a.m., frequently refreshing her browser. She eventually snagged an appointment for herself and her husband for 12:30 p.m.

“I think I’m the only one in my group that got an appointment,” she said.

The Jackson system has distributed over 105,000 doses so far. It’s a massive lift, requiring roughly 275 staff at three locations, including parking attendants and security guards to guide patients in and out; medical and nursing students and firefighters and paramedics to give injections; and nurses to monitor patients after they receive the shots. The sites run seven days a week. The site at Jackson Memorial vaccinates about 60 people an hour.

The hospital’s tech team created an app for appointments, but they are keenly aware that seniors are not always tech savvy. The hospital reached out to 55 churches, temples and mosques in the area trying to contact seniors in underserved communities and will soon partner with local homeless organizations.

As demand for the vaccines outpaces supply, nearby hospitals are canceling appointments. Earlier this month, Baptist Health sent out a tweet canceling all appointments for Jan 20 and later and announcing that new appointments could not be booked.

Both Simmons-Jimenez and her husband’s appointments had been canceled by another hospital, which told her the appointments would be rescheduled, but that was quickly rescinded. She told friends it seemed unlikely they would get vaccinated before summer.

At Jackson Memorial, people start lining up outside the hospital by 7 a.m., 6 feet apart, most wearing double masks in an orderly, fast-moving line. Inside, workers hold laminated cards — green to signal an open seat and red to wait. The process moves quickly — most are vaccinated within 30 minutes.

In a tiny, nondescript room off to the side, three pharmacy technicians sit at a long white table, sticking syringes into the vials and laying them on trays that are delivered to vaccination tables.

A small refrigerator stands in the corner to hold defrosted vials. Each vial holds enough for five doses, sometimes six.

The pharmacy techs mix vaccine based on the number of appointments to ensure nothing is wasted. As the end of the day nears, they mix fewer batches.

“They are literally mixing right on the spot. In the last hour, between 4 and 5 p.m., we slow down. They’ll only bring out one tray of drawn syringes for the exact number of people in the room,” Zambrana said.

The hospital is now required to report how much vaccine is discarded and so far, none has gone to waste, he said.

Simmons-Jimenez and her husband sit down with a two-person team — someone to check them in and someone who administers the shot, typically a paramedic. After a quick prick, patients are given the coveted vaccination card. Within the week, they will get a text or email with the date for their second shot.

When they stand up, someone immediately disinfects the seat and touch-screen pad with bleach wipes.

Simmons-Jimenez marvels at the process. “It’s very well organized,” she said. “I was prepared to arrive today and for them to tell us to go away.”

Patients must stay 10 to 30 minutes for observation, depending on underlying health issues.

The key to avoiding mass cancellations is not opening slots too far in advance, and instead only opening up appointments 24 to 48 hours ahead of time — when the hospital is certain of the supply.

Only 10 percent are no-shows.

The hospital guarantees everyone who has been given a first shot will get the second booster shot — something that hospitals in other states have struggled with because of supply shortages.

Irma Mesa, a 74-year-old grandmother, was shocked when she logged onto the website and got an appointment.

“The first time,” squealed Mesa, who received her second dose.

Mesa, who hasn’t seen her children or grandchildren since January 2020, even got a second appointment for her 80-year-old husband, Angel. Now the couple will consider whether they can safely see their grandkids.

“I feel good, happy,” said Mesa, beaming and echoing the sentiments of many exiting the hospital corridors with fresh Band-Aids on their arms, proudly carrying new vaccination cards. “I’m relieved.”