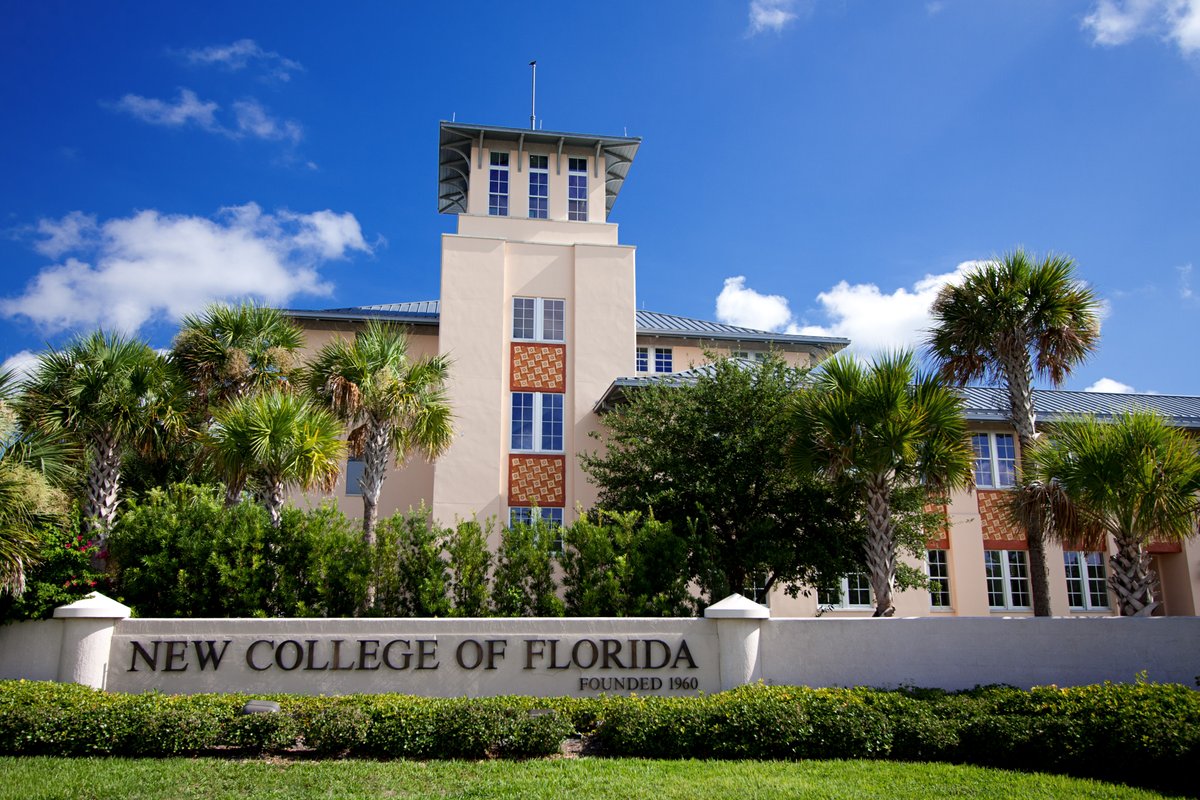 Administration officials say the school is on track to hit enrollment targets.

Founders for the New College of Florida’s first collegiate rowing team this month gathered at Nathan Benderson Park for a small ceremony. Toni Ginsberg-Klemmt, the New College student-turned-coach of New Crew SRQ, brimmed with emotion as she stood by the shore of the Olympic-caliber rowing course. Looking toward administration and a handful of gathered students, she said “I could not have been able to do it without you guys.”

That’s a fairly common sentiment among the alumni for New College, the honors college and only dedicated liberal arts school in Florida’s State University System. Dr. Donal O’Shea, President of the institution, can rattle off the numbers about the school. It’s the state’s top producer of Fulbright Scholars and the top supplier of students for PhDs in math. This week, U.S. News & World Report listed the school as one of the top 100 liberal arts colleges in the country — and the no. 6 public college in the nation, behind only the three U.S. military academies, the Virginia Military Institute and St. Mary’s College in Maryland.

But knowing students who attend the Sarasota school retain the ability to experience and accomplish dreams is a huge priority. New College, with fewer than 1,000 undergraduate students for now, provides an environment small enough that it brims with opportunities for students to form organizations, whether it’s a crew team or a student publication. Students also enjoy a greater ability to work with advisers and tailor an education curriculum that best suits them.

“It’s why people who work here are really committed to being a public institution,” O’Shea said. “I can’t overstate how important I feel it is that this is not an elite thing.”

It’s an experience closer to what students find on private college campuses. New College’s average class size is 12, the student-to-faculty ratio at the school 7 to 1. Alumni and supporters of the school say it’s a treasure within the university system, proving the equivalent of an Ivy League education for a fraction of the price, especially to Florida students.

Mary Ruiz, chair of the Board of Trustees, first acquainted herself with the Sarasota campus as a student in 1973. She started her education when the school was still a private institution; it converted to a public institution before her graduation. She remains proud of the education at a tiny liberal arts college available for public tuition rates.

“People who could never aspire to that level of education can easily access it here,” she said.

And of course, a high percentage of students at New College qualify for scholarships from the state or outside organizations. The average SAT score for incoming freshman is 1257 and the average high school grade point average is 3.87.

And while some dismiss pure academia as unhelpful for Florida filling workforce gaps — see attempts to pay change Bright Futures scholarships based on the job prospects of pursued degrees — Ruiz sees the opposite. While the business consultant values the MBA she earned from the University of South Florida after completing her bachelor’s at New College, it’s that undergrad degree that has proven more useful in her career and efforts as an entrepreneur. And while lessons about financial obligations taught in business school become dated over years, the perseverance and leadership learned at New College remains as useful now as ever.

It’s the nonconventional curriculum construction at the school that contributes to disciplined academia, Ruiz said. Rather than “spoon-feeding” a list of classes students must take to complete a major, a common practice at state universities, New College requires students to create a contract of learning with an adviser that gets renewed each year.

“If forces students to be self-reliant, and forces them to have a sense of agency,” she said. “It inspires an incredible work ethic. As an honors college, it’s very demanding. Once you get through a New College degree, nothing the world can throw you will phase you.”

That also speaks to a frequent criticism O’Shea hears. How can college be rigorous when the school for the most part eschews traditional grades? The college President suggests the individual demands and attention from faculty put a higher level of expectation on New College students.

“It’s not just putting every student on a single scale,” he said. “But it’s much more akin to a performance review. It’s very easy and reductive just assigning a letter …, and it doesn’t tell you a whole lot.”

The results, O’Shea suggests, can be seen in student performance once they leave the institution. About one in six graduates pursue PhDs, he said. Prestigious alumni include former Rep. Lincoln Diaz-Balart and former Georgia state Sen. Samuel Zamarripa.

But there are also a significant number of entrepreneurs. Ruiz counts in those ranks, as the founder of Ruiz Strategic Consulting and former CEO of Centerstone of Sarasota.

Norm Worthington, the founder of cloud communications firm Star2Star, in January sold the business for $437 million in a major acquisition by Sangoma.

Maxeme Tuchman, founder of Miami-based Caribu, just made Inc. Magazine’s Female Founders 100 list for her software app allowing parents to read and draw with their children long-distance. That company, founded in 2016, pulled in an investment by AOL co-founder Steve Case.

New College leaders contend their student body may not be earning degrees geared toward specific careers, that’s because today’s students will be the ones creating tomorrow’s jobs, and there’s no telling what skills those positions will require.

Still, the school faces scrutiny each year, often surrounding the cost per student to provide this level of education.

“Where we get in trouble is when you compare us to these schools that have 50,000 or 60,000 students, they can conceal some of those high costs in areas like sciences,” O’Shea said. Research projects at New College can require access to labs and materials, the same as they do at a major university, but those costs won’t be diluted by a few thousands low-cost English and Literature degrees.

Lawmakers representing the region say the benefits of New College to the state are clear.

“New College is a very special institution,” said Sen. Joe Gruters, a Sarasota Republican. That it has continuously been ranked as one of the top liberal arts colleges and one of the best values for students by U.S. News & World Report shows it’s extremely valuable for our local community.”

Rep. Fiona McFarland, a Sarasota Republican, echoed the sentiment. “It’s a great school and we are tremendously proud to have it here,” she said. “It’s one of the jewels in the crown of Sarasota’s diverse education offerings.”

The lawmakers agreed there’s likely efficiencies any institution in Florida can improve, especially in this tough budget year.

Rep. Will Robinson, a Bradenton Republican, also represents the campus, and he has heard complaints about the per student costs, too. But the institution remains a critical piece of the state’s higher education inventory.

“There’s such diverse value not just to Southwest Florida but to all of Florida,” he said. “I’m familiar with the cost per degree. But that doesn’t change what I feel about the college or the value it has for the students or for my community.”

O’Shea agrees there’s always reasons to evaluate spending. He also stressed New College has aimed to improve its financial standing in recent years. It’s beginning to see outcomes from several years of efforts to increase enrollment. The college received upward of 1,380 applications already for the fall, beating prior years, and the school typically sees the most applications come in during March or April.

The school expects this year to hit its targets as far as student enrollment.

Like any university, New College continues to evolve with the times and with the personalities in charge. O’Shea, an internationally regarded mathematician in charge on New College since the summer of 2012, announced earlier this year he will retire in June. Ruiz said the college remains in the throes of an expansive search for a new President. That means she’s talking as much as possible with students and faculty about what many want to see in the administration for the school moving forward. The commitment to a rigorous public education remains a priority for all parties, she said.

“People will ask me all the time, aren’t you just an arts and sciences college? Yes, we are,” she said. “And we believe in results.”

nextNo-fault repeal backfired in Colorado. It could backfire here, too.