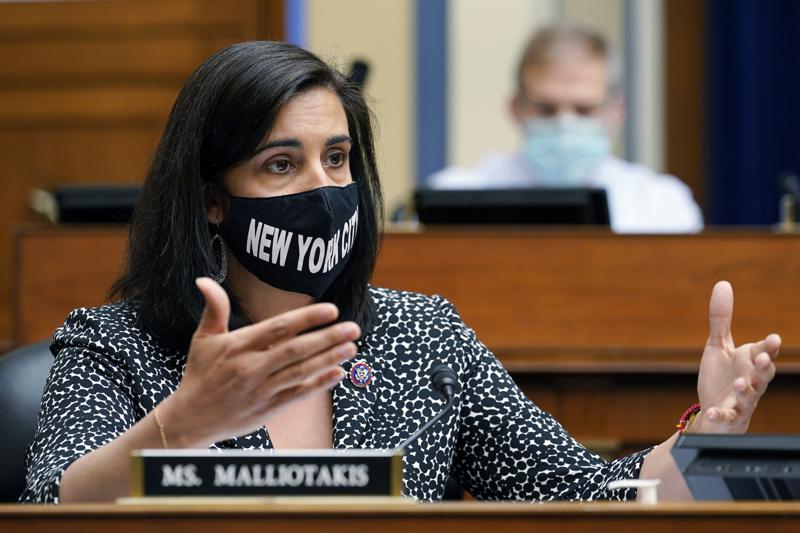 Rep. Nicole Malliotakis, a New York Republican, said it pained her to vote against the $1.9 trillion American Rescue Plan.

But in the weeks that followed, the first-term Republican issued a news release celebrating more than $3.7 million from the package that went to community health centers in her district as one of her “achievements.” She said she prided herself on “bringing federal funding to the district and back into the pockets of taxpayers.”

Malliotakis is far from alone.

Every Republican in Congress voted against the sweeping pandemic relief bill that President Joe Biden signed into law three months ago. But since the early spring votes, Republicans from New York and Indiana to Texas and Washington state have promoted elements of the legislation they fought to defeat.

The Republicans’ favorite provisions represent a tiny sliver of the massive law, which sent $1,400 checks to millions of Americans, extended unemployment benefits until September, increased the child tax credit, offered housing assistance for millions of low-income Americans and expanded health care coverage. Republicans tried to negotiate a smaller package, arguing that Biden’s plan was too expensive and not focused enough on the nation’s health and economic crises.

Democrats are promising to make the pandemic relief vote — and the Republican resistance to it — a central element in their political strategy moving into next year’s midterm elections as they defend delicate House and Senate majorities. And there are early signs that Republicans may struggle to defend their opposition to the popular legislative package, which was designed to protect the nation’s fragile economic recovery following the worst public health threat in a century.

GOP lawmakers have been especially bullish about promoting the rescue plan’s Restaurant Revitalization Fund, which devoted $28.6 billion to the struggling industry. Applications for the program opened this week.

“The Congresswoman is using her platform to inform her constituents of federal funds and resources available to them,” Stefanik spokesperson Karoline Leavitt said. “She did not claim to support the bill in the tweet, and her constituents deserve to know about federal programs they can apply for regardless of how she votes.”

Wicker’s office noted that he voted against the full package, but led efforts to ensure the restaurant relief was included.

The Independent Restaurant Coalition acknowledged the Republican’s awkward position, but offered its thanks anyway.

“Senator Wicker did not vote for the package (we wish all members did!), but his work on the RESTAURANTS Act from the beginning made the relief fund possible,” the industry group tweeted. “We are grateful for that work.”

And White House spokesman Andrew Bates sarcastically expressed appreciation for the Republicans who have begun to tout elements of Biden’s stimulus.

“The American people — majorities of Democrats, independents, and Republicans — have long been firmly unified behind the American Rescue Plan,” Bates said. “So it’s heartening to see Republicans in Congress reaching across the aisle to endorse it — even retroactively.”

The politics of the Republican position are complicated.

The GOP ultimately benefited politically after uniting against the massive economic stimulus package signed into law by President Barack Obama in 2009. Republicans scored massive gains in the House and Senate the following year. While the GOP is optimistic it will retake the House majority in 2022, it’s far from clear whether the stimulus vote will help it get there.

Polling suggests the Biden stimulus is overwhelmingly popular. Two in 3 voters have consistently supported the $1.9 trillion package in recent polling, while individual elements such as the $1,400 direct payments to individuals are even more popular.

And just three months after the bill was signed into law, the Republican opposition has only begun to be tested.

The Democratic National Committee has already launched “digital takeovers” of local news websites in Arizona, Georgia, Wisconsin, Nevada, New Hampshire, Florida, North Carolina and Pennsylvania to thank Democrats and highlight the Republican obstruction. The White House’s political arm has also put up billboards in 20 states calling out Republicans and focused on the Republican opposition in training for Democratic officials.

“Between now and next year’s midterm elections, we’re going to make sure every voter remembers how Republicans tried to stand in the way of this economic boom and our return to normalcy,” said DNC spokesman Ammar Moussa. “And you can count on Democrats to call Republicans out for their hypocrisy when they try to tout the same programs they voted against.”

Beyond funding for restaurants, Republicans have also touted millions of dollars in health care grants allocated to their districts in the latest stimulus plan.

Rep. Madison Cawthorn, a North Carolina Republican, in late March pointed to millions of dollars in such grants on social media, saying he was “proud” to see the taxpayer dollars returning to his district. A spokesman did not respond to a request for comment.

Rep. Alex Mooney, a West Virginia Republican, issued a news release at roughly the same time to promote more than $41 million spread across 12 health care centers in his district.

“I am glad that this funding has been secured,” he said, neglecting to mention how it was secured.

The four-term Republican congressman defended his decision to highlight the grants this week in a statement.

“Despite what anyone claims, all money that is appropriated by Congress is derived from the taxpayer, not President Biden,” Mooney said. “Taxpayers deserve to know how their money is being spent, especially as it affects their towns and communities.”

Malliotakis, who took office in January, promoted more than $3.7 million in health care grants from the Biden stimulus among her achievements in a self-issued “First 100 Days Report Card.”

“These grants were among the 9% of funds dedicated to COVID-19 relief that I was always in support of,” Malliotakis said in a statement. “Regardless of any particular vote, I’m going to help individuals, small businesses and nonprofit organizations get funding they are entitled to.”

nextSunburn — The morning read of what’s hot in Florida politics — 5.6.21