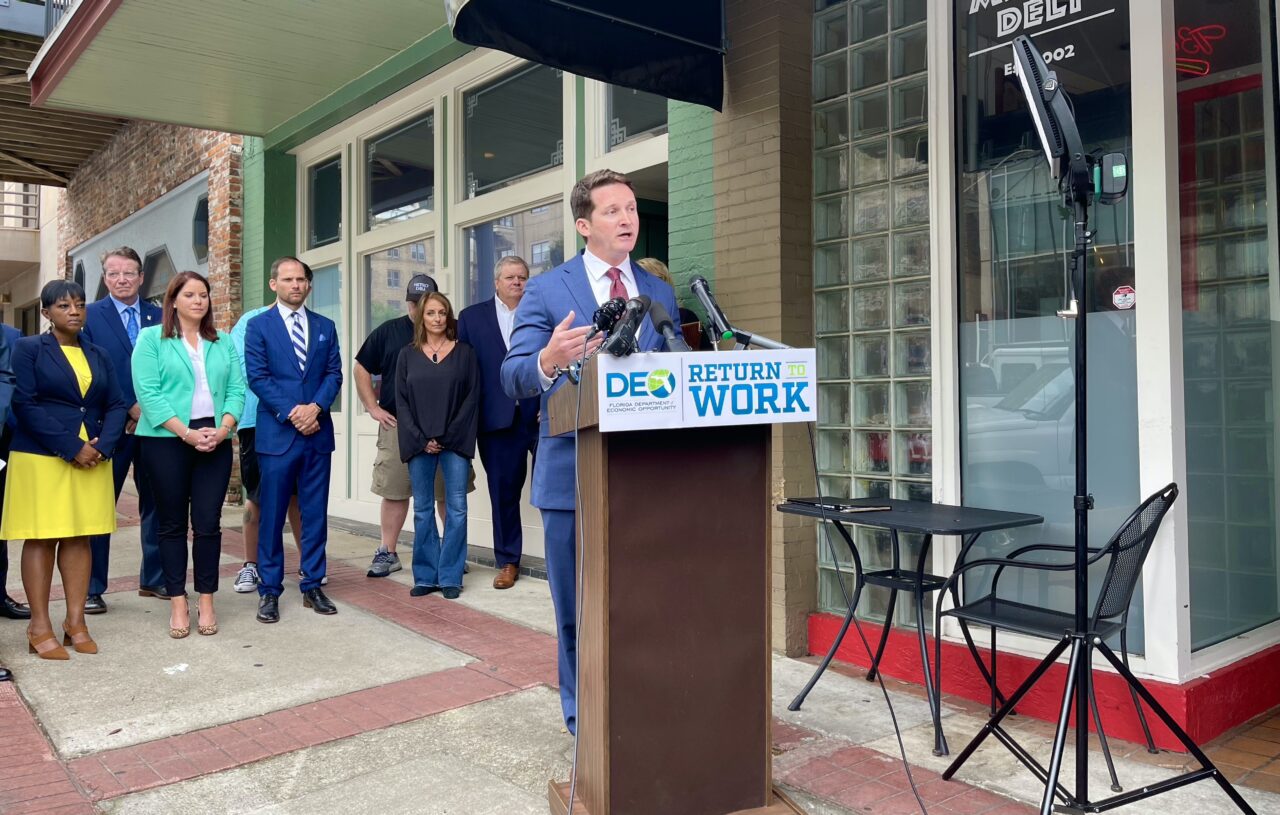 The work search waiver will remain in effect until May 29.

Department of Economic Opportunity Director Dane Eagle announced Wednesday that Florida will not extend its work search waiver for the unemployed.

The waiver, implemented during the pandemic’s peak, allowed Floridians to collect unemployment benefits without proving they were searching for a job.

The state will now encourage the unemployed to find work through a new Return to Work program that aims to connect Floridians to jobs and accelerate Florida’s economic rebound.

Eagle said more than 400,000 jobs are available in the Sunshine State. And with ample vaccine supply, he asserted, it’s time to get back to work.

“You’ve seen restaurants that have had to close earlier or open later or close certain days of the week,” Eagle said during a news conference outside downtown Tallahassee’s Metro Deli. “All over the Panhandle I’ve seen signs that say, ‘Welcome to the new pandemic.’ The 2021 pandemic is unemployment, not being able to hire. So, we’ve got to put an end to that.”

The state will also crackdown on Floridians who attempt to sidestep the work search requirement. Eagle explained that employers can report if an applicant is not earnestly pursuing a job opportunity.

“If you’re applying for a job and not showing up for an interview or refusing to do the work, that has to be reported to us and you will no longer be able to collect unemployment,” Eagle said.

Eagle said many people are taking advantage of $275 a week in Florida benefits and $300 in federal assistance, which, when combined, are competitive with weekly pay at many restaurants and leisure-industry businesses.

Rob Bazemore, owner of Metro Deli, said he has been lucky that most of his staff of about 12 people has kept working through the pandemic, but as the economy picks up it has been hard bringing new hires on board.

“We are going to have a really hard time competing, until that extra $300 goes away,” Bazemore said. “Once it gets back down to $275, now we can work with that. We can beat that, but if you are going to make us beat 600 bucks a week, it’s going to be not easy for us.”

Florida lifted several unemployment mandates amid the COVID-19 pandemic. With so many Florida workers impacted, state officials attempted to remove some of those barriers to receiving state support, even as Florida’s unemployment application system collapsed because of a surge in jobless Floridians.

The problems with CONNECT, the state’s online portal for accessing claims, led to the departure of DEO Director Ken Lawson last year. Eagle, a former state Representative, took over the position.

“I don’t understand why people don’t have that urge anymore to want to continue to rise, instead of just staying home and make 300 extra bucks a week,” Agramonte said. “At $300, why not make $400, or why not make $500? They have to have that ethic in themselves to want to come out and do the work.”

He also sympathized with the limited staff he does have on hand.

The 25-year business owner said he’s struggling to seat tables because of a lack of staff. He said he’s ready to hire 30 more workers.

Florida’s unemployment rate is roughly 4.7%, accounting for roughly 475,000 Floridians. The rate, however, is lower than the national average of 6%. Notably, the Sunshine State has some of the lowest unemployment benefits in the nation.

Gov. Ron DeSantis waived the work-search requirement in an executive order as the state’s unemployment rate shot up to 13.8% in April 2020, when the pandemic forced businesses to shut down or dramatically scale back.

“We suspended that last year at this time because, quite frankly, there weren’t jobs,” DeSantis said last week.

The proposal (SB 1906) aimed to raise the weekly maximum payment from $275 to $375 a week and extended the duration of benefits. The proposal also called for the number of job searches to drop to three a week for most people and to two a week for people living in counties with fewer than 75,000 residents.

But DeSantis voiced opposition to the increase in weekly payments, and the House did not take up the Senate bill.

A concern of House Republicans was that increased benefits could lead to businesses being required to pay more money into the state’s unemployment compensation trust fund. Similar reasoning was used when benefits were cut in 2011 to blunt a major increase in unemployment taxes on businesses.

The work search requirement waiver will remain in effect until May 29.

previousJoe Henderson: Choosing lies over truth may not be so costly in Florida