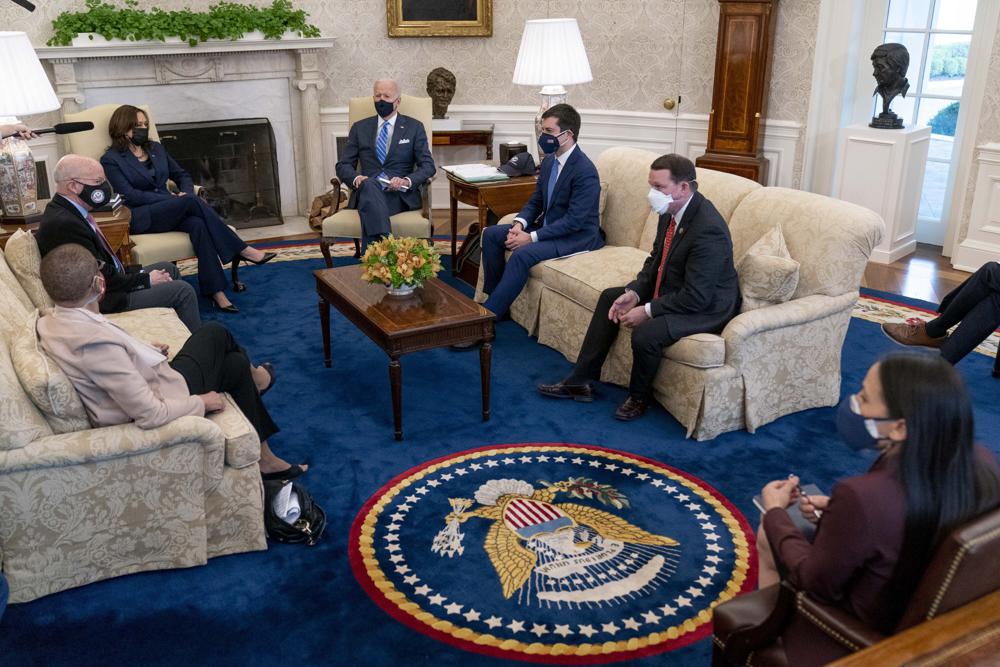 Biden’s legislative team of 15 is charged with maneuvering and mapping out the process of actually getting his agenda passed.

The calls can come late in the day, over the weekend, really any time a question pops into the mind of a legislator or aide. The meetings may dispense pleasantries from Team Biden — or get testy. The topic can be one arcane fact or a deep dive into the nuances of policy.

While President Joe Biden pitches his infrastructure plan to the American public with events at an Ohio college, a Ford plant in Michigan or an aging Louisiana bridge, this is where the real work of delivering his legislative agenda takes place: in phone calls to Capitol Hill, over Zoom meetings and during the occasional cup of coffee with members of his legislative affairs team.

Biden’s legislative team of 15 is charged with maneuvering and mapping out the process of actually getting his agenda passed on Capitol Hill. Led by Louisa Terrell, a Capitol Hill veteran, the team has had a vast footprint over the course of Biden’s first months in office, holding over 553 phone calls or meetings with lawmakers, their chiefs of staff and staff directors focused on the American Jobs Plan alone, Biden’s infrastructure package, as of May 21.

Their work on the massive coronavirus relief bill that passed in March helped Biden keep both progressives and moderates on board, with no defections and few public complaints.

They’re facing much bigger hurdles now trying to usher Biden’s infrastructure bill through Congress, with lots of other difficult issues stacked up in the queue behind it. Just recently, the legislative team, which tries to keep a low profile, got caught in the negotiating crossfire as Republicans accused White House aides of contradicting Biden’s commitment in private meetings to back a much smaller counteroffer.

“It went poorly,” Republican Sen. Roger Wicker of Mississippi said of one meeting with Biden’s legislative team, “because it didn’t have any relation to the meeting we had with the chief executive of the land.”

The outcome seemed to further dampen prospects for a bipartisan agreement on the bill. And the outlook didn’t seem to improve heading into the holiday weekend despite a flurry of offers and counteroffers.

Biden’s decades of experience as a senator and vice president make him well suited to steer negotiations with Capitol Hill, but also leave him keenly aware of the limitations that come with narrow Democratic majorities in the House and Senate.

Overall, though, the attentiveness of his legislative team has won plaudits from lawmakers.

Virginia Democratic Sen. Mark Warner, who calls himself a “fairly tough taskmaster” on legislative discussions, says he’s had numerous late-night and weekend calls with the team about various bills.

“I’m a fairly intense member, so I want more than talking points,” he said.

Warner took note of his long-standing relationships with a number of members of the team — he said he tried to hire Terrell once and used to play basketball with Biden aide Steve Ricchetti.

Terrell worked as Biden’s deputy chief of staff in the Senate and as a special assistant to President Barack Obama for legislative affairs, and two of her deputies — Reema Dodin and Shuwanza Goff — had long careers with Democratic leaders on Capitol Hill.

In an interview, Terrell said those relationships have helped finesse the sometimes difficult task of bringing a skeptical lawmaker along, because when a member of the team has to “give extra love and attention” to a lawmaker, “it’s not coming out of left field.”

“It’s really coming from a place of someone who knows them or has been around and has a reputation of credibility and authenticity,” she said.

The active engagement with lawmakers comes from an ethos set by the president himself, who spent nearly four decades in the Senate. Terrell said the president has advised the team to follow his own personal philosophy that “politics is personal” and “you have to make investments in building a real relationship — you don’t just call people when you need them.”

Biden, she said, has a hand in all of their legislative strategy and in thinking about potential “leverage points” with legislators.

“There is no one who knows Congress better than the president,” she said.

Biden is known to take an active role in the wrangling, taking the temperature of legislators on issues and trying to help smooth negotiations. He recently invited two key moderate Democrats, Sens. Joe Manchin of West Virginia and Kyrsten Sinema of Arizona, to the White House for individual meetings on his infrastructure package.

He maintains a particularly close relationship with Manchin, who remains perhaps the most significant swing vote in the Senate. Manchin has said that he’s spoken with Biden over the phone more than half a dozen times since he became president, and that the two exchange calls “as often as is needed.” Beyond that, the senator’s wife, Gayle Manchin, received an appointment from Biden to co-chair the Appalachian Regional Commission, an economic development partnership involving the federal government and 13 states.

Terrell said the president’s personal relationships with lawmakers, coupled with his knowledge of past legislative fights, offer the team an “astounding advantage” as they seek out agreement on thorny issues.

In addition to Terrell and the legislative affairs team out of the White House, Biden has deputized a number of his Cabinet secretaries — dubbed his Jobs Cabinet — to help him sell his infrastructure plan. Commerce Secretary Gina Raimondo and Transportation Secretary Pete Buttigieg and others are sometimes brought in to work with a particular legislator or address a specific concern.

Many of Biden’s top aides are heavily involved in selling his plans to lawmakers. One White House aide said that economic adviser Brian Deese talks with lawmakers so frequently that he might as well have his own office in the Capitol.

That broad team has its advantages and disadvantages. While Warner said he can get his calls and questions answered quickly, he added that even after months of working with the White House, “I’m not 100% sure who are the decision makers” in the administration.

“So that probably further empowers the legislative team because it’s not like you can go around them,” he suggested.

While Terrell’s team has the benefit of years of experience on Capitol Hill, they’ve faced one major handicap: the COVID-19 pandemic that barred in-person meetings and social gatherings, where traditionally the most important legislative work gets done.

Phil Schiliro, who served as Obama’s director of legislative affairs, remembers holding social events every week for lawmakers, including a candlelit dinner at the White House for committee chairs, ranking members and their spouses and a White House picnic where he sat in a dunk tank while members threw balls to sink him.

“So much of the job is interacting with members of Congress and staff, face to face, exchanging information. And not being able to do that is a little bit like working your way through a maze with a blindfold on, and mittens,” he said.

Terrell remembers her work in the Obama White House bringing her up to Capitol Hill “every day from 10 to 3,” where “you were able to really have all these one-on-one and spontaneous and authentic conversations.”

Now, “it’s a big deal to not have the Senate Chef be open,” she said, referencing a cafe in the basement of the Hart Senate Office Building.

“That’s the place where you could grab a Senate staff director or chief, or a member, and say, ‘Hey, let’s grab a cup of coffee for two seconds. I know you’re in between meetings. I want to know what you’re thinking about X.’ Or, ‘What can we do to help you on Y?’” she recounted.

Now, she said, the interactions with staff and members “are very deliberate” and largely done over the phone and Zoom, which “are much harder to do.”

Finally, though, as pandemic-era public health restrictions ease, some of that face-to-face activity is returning. Biden recently was able to flex one of the traditional trappings of the presidency when he invited six lawmakers to stand around him as he signed a bill tackling hate crimes against Asian Americans.

They huddled close, masks off and smiles on, as Biden grinned and handed each one a signing pen — the presidential symbol of a job well done.

previousGov. DeSantis makes eight new appointments to the Board of Nursing