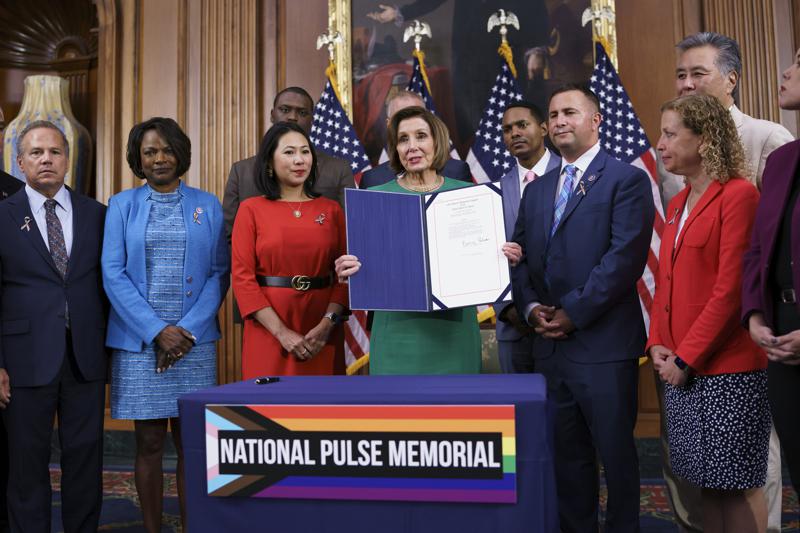 House Speaker Nancy Pelosi called for stronger gun safety measures Wednesday as she marked Congress’ passage of legislation designating the site of the deadliest attack on the LGBTQ community in American history as a national memorial.

The bill creates the National Pulse Memorial at the site of the Pulse Nightclub in Orlando, Florida. Five years ago, a gunman killed 49 people and wounded 53 others there.

The Senate voted final congressional approval of the bill last week and President Joe Biden is expected to sign it soon. The site will not be part of the National Park System and the measure forbids federal money from being spent on it.

Pelosi formally signed the bill, a routine procedural step before sending legislation to the White House. That created an opportunity for a photo op with Florida and LGBTQ lawmakers.

“Today our legislation to establish a national memorial at Pulse was enrolled by Congress to be signed by the President and become law,” tweeted Rep. Val Demings, an Orlando Democrat. “As we look forward to this important signing, I am thinking of all those who lost their lives five years ago. We will not forget you.

“Our bill to designate the Pulse National Memorial is finally on its way to the President’s desk,” tweeted Rep. Stephanie Murphy, a Winter Park Democrat. “This memorial will create a place of healing for survivors and a reminder that we will always be Orlando Strong.”

“Our bill to designate the Pulse National Memorial and honor our 49 angels is one step closer to becoming law,” tweeted Rep. Darren Soto a Kissimmee Democrat. “It was a tremendous honor to be joined by members of the Florida Congressional delegation and LGBT+ Equality Caucus as Speakr Pelosi signed H.R. 49. Next Step: President Biden.”

Citing background check and other gun measures that have long failed to clear the Senate, Pelosi, a California Democrat, said, “It’s really important for survivors to know we are not going away until the job is done.”
___
Republished with permission of the Associated Press. Jacob Ogles contributed additional reporting.
Post Views: 971