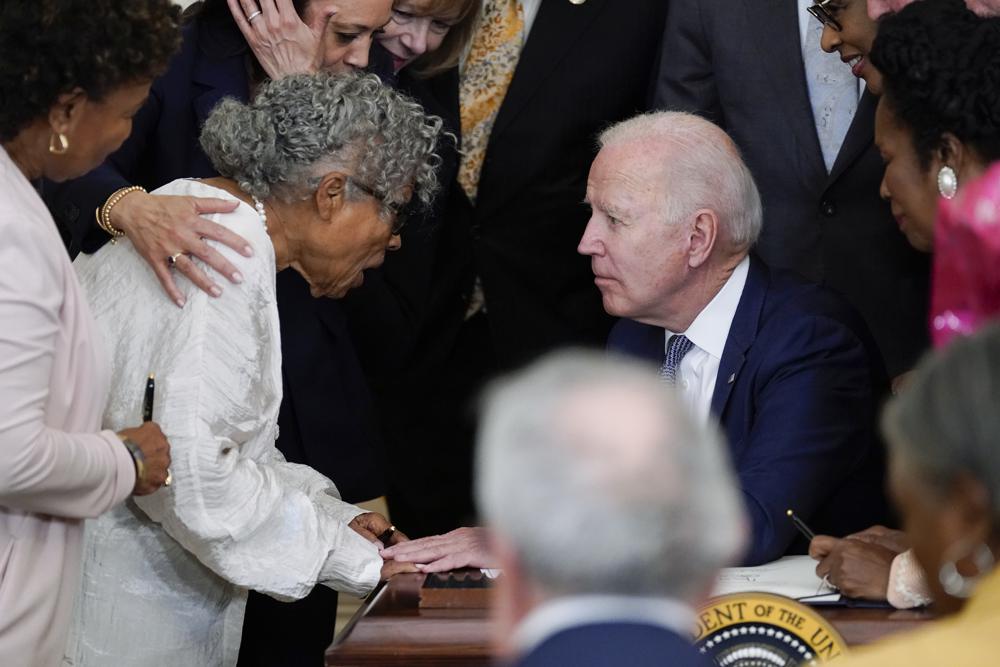 President Joe Biden signed legislation Thursday establishing a new federal holiday commemorating the end of slavery, saying he believes it will go down as one of the greatest honors he has as President.

Biden signed into law a bill to make Juneteenth, or June 19, the 12th federal holiday. The House voted 415-14 on Wednesday to send the bill to Biden, while the Senate passed the bill unanimously the day before.

“This is a day of profound weight and profound power, a day in which we remember the moral stain, the terrible toll that slavery took on the country and continues to take,” Biden said.

Juneteenth commemorates June 19, 1865, when Union soldiers brought the news of freedom to enslaved Black people in Galveston, Texas — two months after the Confederacy had surrendered. That was also about 2 1/2 years after the Emancipation Proclamation freed slaves in the Southern states.

It’s the first new federal holiday since Martin Luther King Jr. Day was created in 1983. One of the federal holidays, Inauguration Day, happens every four years.

The U.S. Office of Personnel Management, which is the human resources office for the federal government, tweeted Thursday that most federal employees will observe the new holiday — Juneteenth National Independence Day — on Friday since June 19 falls on a Saturday this year.

Biden noted the overwhelming support for the bill from lawmakers in both parties. He had run for President promising to unite the country and work with Republicans, but his first major legislation to provide more COVID-19 relief to American consumers and businesses was passed along party lines and he has struggled to unite lawmakers to support a major public works bill.

“I hope this is the beginning of a change in the way we deal with one another,” Biden said.

Biden signed the legislation surrounded by members of the Congressional Black Caucus as well as the lead sponsors of the legislation in the Senate, Sens. Edward Markey, a Massachusetts Democrat, and John Cornyn, a Texas Republican. He was introduced by Vice President Kamala Harris, the nation’s first African-American Vice President.

“We have come far and we have far to go, but today is a day of celebration,” Harris said.

The White House moved quickly to hold the signing ceremony after the House debated the bill and then voted for it Wednesday.

“Our federal holidays are purposely few in number and recognize the most important milestones,” said Democratic Rep. Carolyn Maloney of New York. “I cannot think of a more important milestone to commemorate than the end of slavery in the United States.”

Democratic Rep. Sheila Jackson Lee of Texas, speaking next to a large poster of a Black man whose back bore massive scarring from being whipped, said she would be in Galveston on Saturday to celebrate along with Cornyn.

“Can you imagine?” said Jackson Lee. “I will be standing maybe taller than Sen. Cornyn, forgive me for that, because it will be such an elevation of joy.”

The Senate passed the bill Tuesday under a unanimous consent agreement that expedites the process for considering legislation. It takes just one senator’s objection to block such agreements.

The vote comes as lawmakers struggle to overcome divisions on police reform legislation following the killing of George Floyd by police and as Republican state legislators push what experts say is an unprecedented number of bills aimed at restricting access to the ballot box. While Republicans say the goal is to prevent voter fraud, Democrats contend that the measures are aimed at undermining minority voting rights.

Several members of the Congressional Black Caucus went to the floor Wednesday to speak in favor of the bill. Rep. Bonnie Watson Coleman, a New Jersey Democrat, said she viewed Juneteenth as a commemoration rather than a celebration because it represented something that was delayed in happening.

“It also reminds me of what we don’t have today,” she said. “And that is full access to justice, freedom and equality. All these are often in short supply as it relates to the Black community.”

“Since I believe in treating everyone equally, regardless of race, and that we should be focused on what unites us rather than our differences, I will vote no,” he said in a press release.

The vast majority of states recognize Juneteenth as a holiday or have an official observance of the day, and most states hold celebrations. Juneteenth is a paid holiday for state employees in Texas, New York, Virginia and Washington.

Republican Rep. Clay Higgins of Louisiana said he would vote for the bill and that he supported the establishment of a federal holiday, but he was upset that the name of the holiday included the word “independence” rather than “emancipation.”

“Why would the Democrats want to politicize this by coopting the name of our sacred holiday of Independence Day?” Higgins asked.

Rep. Brenda Lawrence, a Michigan Democrat, replied, “I want to say to my white colleagues on the other side: Getting your independence from being enslaved in a country is different from a country getting independence to rule themselves.”

She added, “We have a responsibility to teach every generation of Black and white Americans the pride of a people who have survived, endured and succeeded in these United States of America despite slavery.”