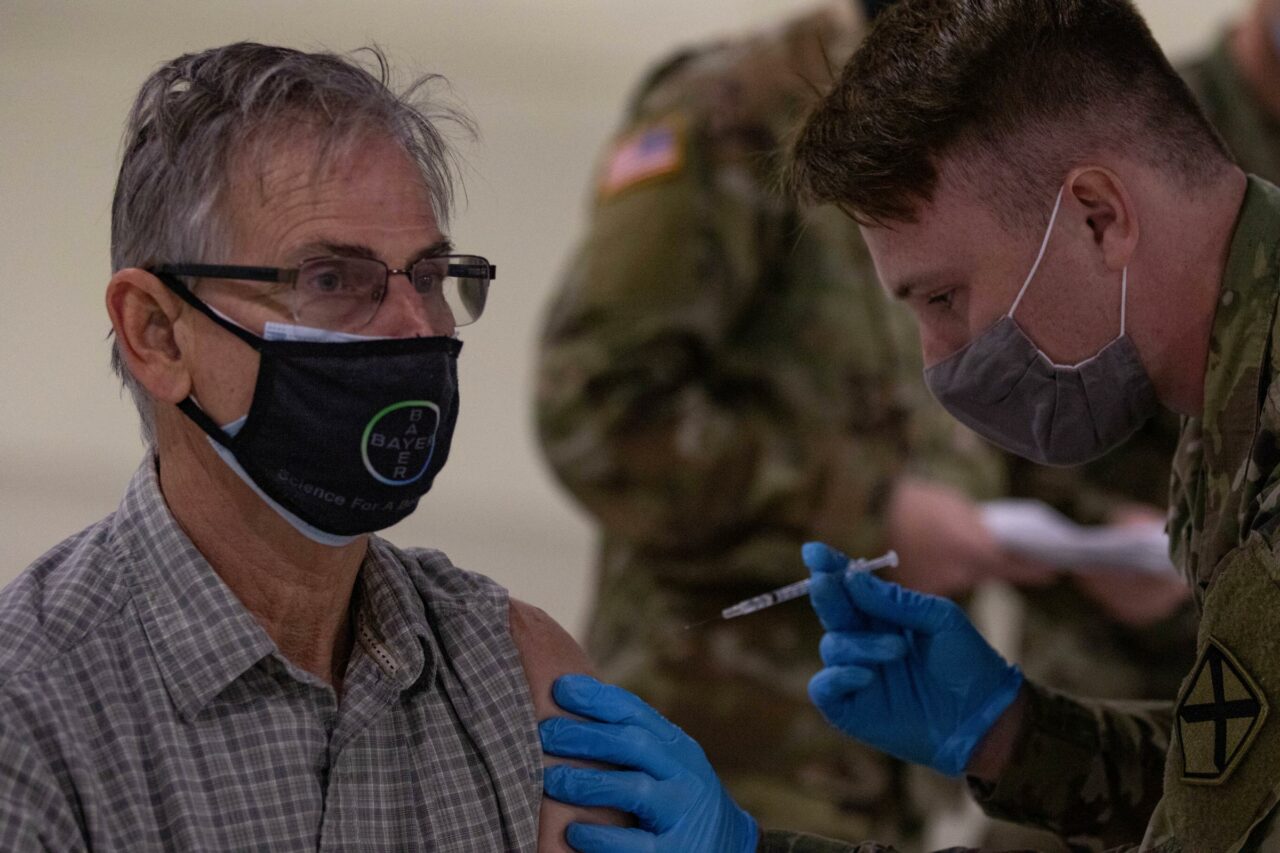 Some areas — rural, North Florida — are lagging much more than others.

Florida will fall far short of President Joe Biden‘s goal of getting 70% of adults fully vaccinated against the COVID-19 virus by Independence Day.

Barring a dramatic change in the rate that Floridians have been getting vaccinated in recent weeks, it could take about 10 more weeks for that number to climb to 70%. That would be the end of August — and that assumes the deceleration trend in vaccinations seen in the past couple of months doesn’t continue.

Standing in the State Dining Room on May 4, Biden laid out his goal to vaccinate 70% of American adults by Independence Day, saying the U.S. would need to overcome “doubters” and laziness to do it. “This is your choice,” he told Americans. “It’s life and death.”

As of June 22, about 54% of Florida adults — those age 18 or older — were fully vaccinated, according to data provided by the U.S. Centers for Disease Control and Prevention.

The Florida Department of Health no longer publicly releases complete information on vaccinations, but does share robust data with the CDC. So this report relies entirely on data as it is presented on the CDC website.

That data show stark geographical differences in Florida regarding vaccinations.

Most counties with urban and suburban centers are seeing far higher percentages of people getting vaccinated than most rural counties.

Consequently, while Florida may no longer be vulnerable to mass, statewide outbreaks, localized outbreaks like one seen in southwestern Missouri in late June could happen in a variety of Florida locales, particularly as the so-called “delta” variant spreads.

There may be economic disparities emerging at the local level as well, as vacationers seeking “safe” destinations could face clear choices ranging between a current 65% vaccination rate in Miami-Dade County, or a 39% rate in Walton County, the locale of Fort Walton Beach.

Florida Department of Health Communications Director Weesam Khoury said the state is now shifting to a locally led COVID-19 vaccination response effort because each county has its own unique needs and needs very specific responses. That  likely will include newly developed local billboards and radio public service announcements, among other steps.

“It is definitely a priority to continue increasing vaccinations at both the rural level as well as specific to all the different types of diversity we have in Florida,” she added.

“From the state perspective, we’re working very hard to develop campaigns that are specific to the needs of certain areas of Florida. We’re focusing on channels that will be more successful in rural areas, with billboards and radio ads. We’re also focusing on analyzing the data from an epidemiological standpoint where I may be informed there is a cluster and we know we need to do grassroots responses at the local level, as communications outreach to mitigate the spread,” Khoury said.

University of South Florida epidemiologist Dr. Jason Salemi concurred with her that one-size-fits-all approaches are not the answer. He also agreed that there are plenty of people who still can be convinced to get vaccinations, but they need to be convinced.

“I think for some people, it’s not just a clear-cut no, right? They’re on the fence,” Salemi said. “For those people, what I’m hoping is this constant message we’re trying to get out in the media, and the cautionary tales. If there is one thing that people should pay attention to, is what just happened in southwest Missouri. … In some of those hospitals, you’ve had more hospitalizations recently than they had during their winter surge, which was so horrible, than just about anywhere in the country.

“And so this delta variant is more transmissible, is more likely to cause severe illness, and it’s really just taking full advantage of unvaccinated populations,” Salemi, who has been tracking Florida’s COVID-19 outbreaks, said.

“We obviously need to do work to change that trend,” Salemi said. “There are still millions of people in Florida who are of vaccine eligible age who have yet to be vaccinated.”

Nationally, Florida ranks 26th in vaccination rates among adults, not including Texas or Hawaii, states for which the CDC did not have June 22 data.

Vermont, Massachusetts, Maine, and Connecticut all had reached 70% by June 22, according to the CDC data. Eleven other states, ranging from Washington to New Mexico, to Minnesota, to New York, to Virginia, had surpassed 60%.

“I’m here to ask anyone who’s listening … all the people within the sound of my voice, to please, go and get the shot,” Biden said at a Central Florida news conference.”

The CDC data suggest the early focus on senior citizens and their desires to get vaccinated worked. Statewide, 77% of people age 65 or older were vaccinated by June 22.

And that senior enthusiasm for COVID-19 shots shows up in individual counties’ situations.

Florida’s most-vaccinated county is Sumter, the location of most of The Villages retirement community, and home to the oldest population in the state. Sumter is the only Florida county to have achieved getting at least 70% of all adults vaccinated. On June 22, the rate there was 71%.

The only other Florida counties that reached 60% are in South Florida, Miami-Dade at 65%, and Monroe at 63%.

In what no doubt is a worrisome contrast for rural health officials, 27 mostly low-population counties, scattered throughout North Florida or around Lake Okeechobee, had yet to see even 40% of their adult populations vaccinated by June 22.

In Baker, Holmes, Washington, and Glades counties, just 25% — one of every four adults — were fully vaccinated by June 22.